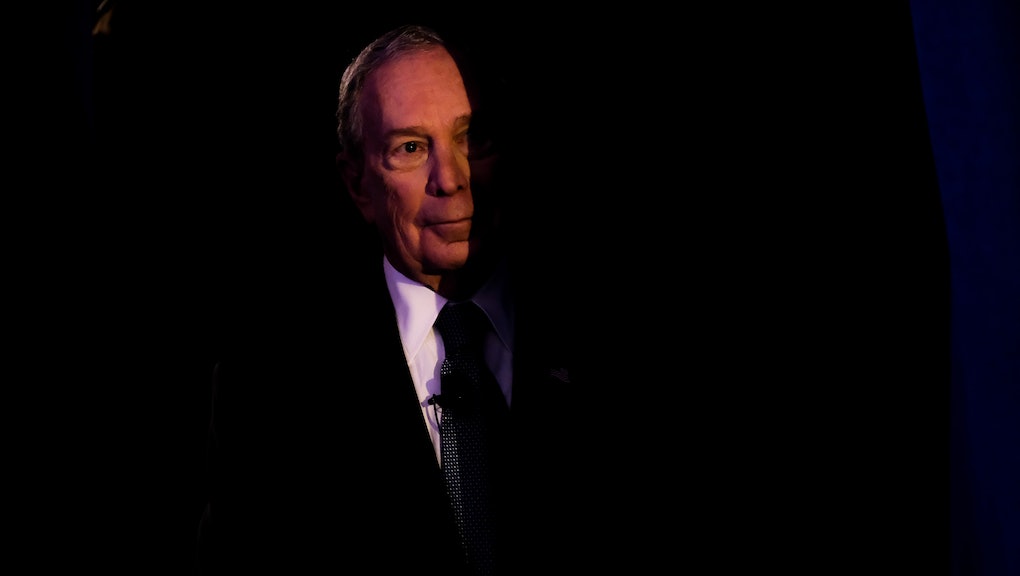 Former New York City Mayor Mike Bloomberg is shifting his campaign funding plans once again, reneging on a pledge to pay his former staffers through the election and support the eventual Democratic nominee via a political action committee (PAC). Instead, he anounced Friday, he plans to donate $18 million to the Democratic National Committee to support its organizing programs in swing states, called "Battleground Build-Up 2020."

"We should also not assume that [President] Trump’s incompetence will be enough to make him a one-term president," the memo reads. "Trump’s ability to lie and propagate misinformation, particularly using digital tools and other means with swing voters in battleground states, will continue to ensure a close race in November."

Part of the allure of the Bloomberg 2020 campaign — aside from iPhones, laptops, and starting salaries for field staff triple the normal amount — was the promise that staffers would be paid through the November general election, even if the mayor was not the presidential nominee. But earlier this month it was revealed that the campaign was not making good on this pledge — though it would let staffers keep their campaign-issued iPhones, although they'd have to pay the tax on the devices. Bloomberg dropped out of the race March 4, one day after Super Tuesday.

The new donation to the DNC comes from the Bloomberg 2020 campaign account, which is legal; campaigns can donate unlimited amounts of money to political parties. Bloomberg also recently donated $2 million to Swing Left and $500,000 to Voto Latino, and has consistently said he'd use his vast personal fortune to work to oust Trump.

But the DNC donation means that hundreds of Bloomber staffers will lose their jobs, and thus their income, while a pandemic rages on. The DNC will be hiring its own staff with the donated $18 million, meaning that many of Bloomberg's remaining team members are being laid off. After an initial round of layoffs followed Bloomberg's announcement that he was suspending his campaign, staffers who were kept on had been told that they would be paid by the billionaire's forthcoming PAC. But the DNC donation comes in tandem with a second round of layoffs, Politico reported.

On a conference call, staffers were reportedly invited to apply for jobs with the DNC. "If the DNC and Joe Biden choose to ignore us, they are complicit as well," one former employee said to Politico. "How can the party claim to care about working Americans while taking money from a billionaire that does not fulfill his promises to his employees?”

The Bloomberg campaign sees the donation of its money and ground operation as a matter of urgency, "While we considered creating our own independent entity to support the nominee and hold the president accountable," an unsigned Bloomberg campaign memo read, "this race is too important to have many competing groups with good intentions but that are not coordinated and united in strategy and execution."

Office spaces that the Bloomberg campaign paid for through November will be taken over by the DNC as well, the Times reported. "This will help us invest in more organizers across the country to elect the next president and help Democrats win up and down the ballot," Tom Perez, the chairman of the DNC, wrote in a memo.

Bloomberg already has a PAC devoted to electing Democrats, called Independence USA, which he launched in 2018 in time for the midterm elections.