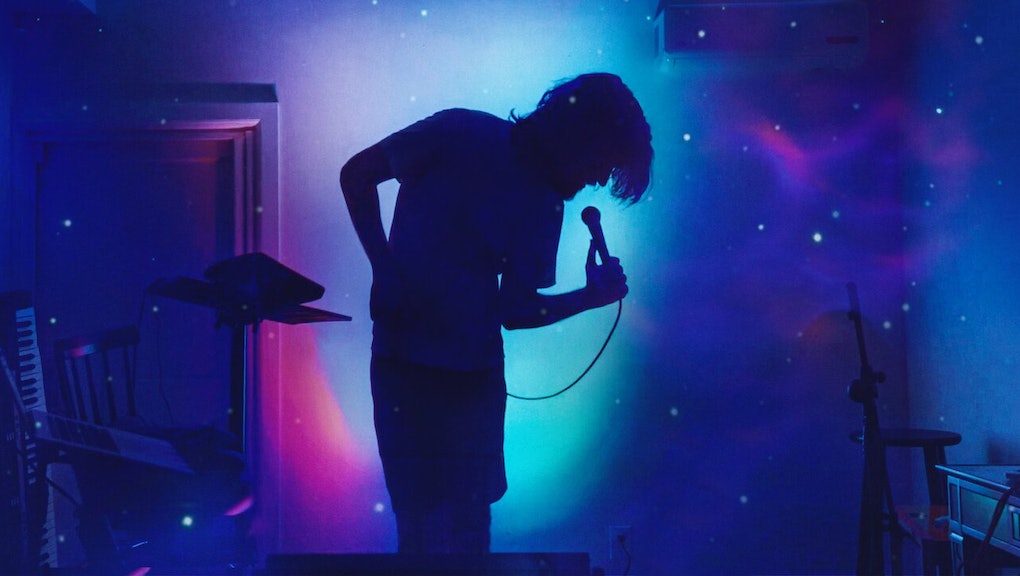 About halfway through his new Netflix special, comedian/musician Bo Burnham insists: he’s not going to kill himself. Also, you shouldn’t either. He’s initially telling this to the camera in the single solitary room that his entire one-man show, Inside, takes place within, before the scene suddenly cuts to him sitting in the dark at night in the same room, with a projection of the same, continuous anti-suicide appeal projected onto his body. A midnight Burnham looks off-screen — apathetic, spent, scrolling on his phone — possibly listening to his own message. Possibly not.

Killing yourself isn’t the answer, but “if I could kill myself today and be dead until 18 months from now, I would do it,” he continues. “But alas when you kill yourself, you’re dead forever. And we shouldn’t be dead forever. Yet.”

The moment is one of many throughout Inside — tragically comic (or comically tragic), visually arresting, and relentlessly inventive and devastating — that make it feel like the greatest work to come from, and speak to, the pandemic. If we had truly known what was to come at the start of 2020, would we have chosen to simply not be alive to skip the next year and a half?

It’s a dark thought, but by the end of the special, Inside feels most singular for having channeled seemingly every dark, quarantine-related thought and reality of the past year — mass death, corporate co-optation of social movements, FaceTiming with one’s tech-inept mother, Jeff Bezos, white women instagram aesthetic, the oppressive nature of the internet’s infinitude, the end of the world — into something playful, gut-wrenching, unpredictable, and, via the varying genres of music Burnham plays with throughout, often very catchy.

It feels reductive and inaccurate to call Inside a comedy special. It is funny at times, but it largely explodes the idea of a comedy special as Burnham continuously plays with form: the show is chock-full of musical numbers (harkening back to his Youtube days of being holed up in his room performing his precociously clever songs) of him in different personas, along with verite monologues, sketches of sorts, and a faux-Twitch stream of him playing a game of his own solitary life in the room. The aesthetics — the cinematography, varying set design within the same room, the performances — along with the original music offer a genuinely astounding feat of art, particularly for Burnham to make solely on his own within a year.

Most consistently, though, Inside features sequences of Burnham, bearded and increasingly shaggy, simply existing in the same room he shot, performed and edited the show. He paces; he plays with lighting set-ups; he looks up at the ceiling; he stares at the clock as the moment he turns 30; he curses at himself in frustration; he sobs. In this way, beyond the subject matter of his songs — many of which feature genuinely accomplished music and transcendent performances — the show feels like a capsule of even the most quotidian emptiness of sitting endlessly with one’s thoughts for over a year.

But a large chunk of the special does speak directly to the kind of political awakenings for many throughout the pandemic. At the top, Burnham pokes fun at the inanity of a white guy creating comedy as some sort of public service while the world is ablaze. In another, a sock puppet that teaches him “how the world works” turns into a kind of dark metaphor for the suffocating white hegemony that orders the world. Most persistent is the theme of the digital age, of its corrupting influence and the sludge we are immersed in and can now never escape. It is a marvel that Burnham manages to stuff all of this in while making it entertaining, scrubbed of sanctimony, and at times surprisingly insightful.

The most poignant moments perhaps are about the feeling of hopelessness that comes with a greater awareness of our doomed realities. Late in the special, Burnham sings a pared-down acoustic track in front of a projection of a woodsy background, in what feels like a graceful elegy for humanity and its end. Yet what makes the song and the special feel so remarkably haunted is how Burnham’s lamentations about what feel like the end of the world at-large also feel like an intimate window into the end of the world within his very self.

Burnham has long been open about his struggles with mental health, and specifically the link between his own art and his state of mind — his tortured relationship with performing and with his audiences (particularly in his last special Make Happy), his panic attacks while on-stage that led him to leave comedy and focus on filmmaking (Eighth Grade) and acting (Promising Young Woman). Throughout the show, there are brief moments that quietly reflect this terror. In one scene he stares resentfully at an old video of a young Burnham performing for the camera. Elsewhere, he plays a Youtuber of sorts, grinning maniacally about new content for fans while holding a literal dagger. In another scene, he sits in the dark, his head lit by an askance spotlight, while an artificial crowd, laughter growing, causes him to recoil in horror.

By the end of the special, Inside feels most singular for having channeled seemingly every dark, quarantine-related thought and reality of the past year into something playful, gut-wrenching, unpredictable, and, via the varying genres of music that Burnham plays with throughout, often very catchy.

In other words, in Inside, we can sense that his work is what kills him and sustains him. Throughout the show, which can feel as much like a portrait of art-making as anything else, Burnham periodically gives us updates about his progress working on it, the ongoing process revealing his increasingly deteriorating state. At one point, Burnham tells the camera that his recent sense of feeling close to finishing the special “has made me completely freak out because if I finish this special, that means I have to not work on it anymore and that means I have to just live my life.” Soon after, he sits in front of a microphone, slowly states, “I am not well,” and begins to cry while the camera zooms in on itself and the sound of a cheering crowd fades in. Many scenes play out in this kind of candid, naturalistic way. Are these moments completely real and unvarnished? It doesn’t seem to matter. The act of creating the work, whether in some scenes partially artificial or not, is in itself the very real sacrifice and the anguish.

Yet, Burnham’s self-portrait of his descent is so naked and formally ingenious, it feels like an intimate and universal picture of mental illness, of feeling trapped. The end of the special — a brilliantly elliptical, if utterly horrifying conclusion — seems to indicate that for Burnham, there is no escape, even as we begin to collectively exit our hovels and go outside post-quarantine. It’s a rather dark sibling scene to the ending of Make Happy — Burnham’s trailer for Inside literally showed the same final scene of his previous special — which showed Burnham exiting the stage, and by way of editing trickery, ending up in what ends up being the same room of Inside. In that last special, he sings a song ruminating on his happiness, before exiting out of the room into a small, happy life with his partner. In Inside, Burnham eventually exits the room as well, but the outside is starkly different. Was the initial version a dream, an imaginary set?

Some days, perhaps that idyllic life wasn’t real. On some days it can be, Burnham seems to say. For some the end of the world has already happened, is always happening, only to return again the next day, or the next year. “The quiet comprehending of the ending of it all,” Burnham sings on his acoustic woodsy scene before he fades out, crooning with a wistful smile, “Hey, what can ya say? We were overdue. But it’ll be over soon. You wait.”