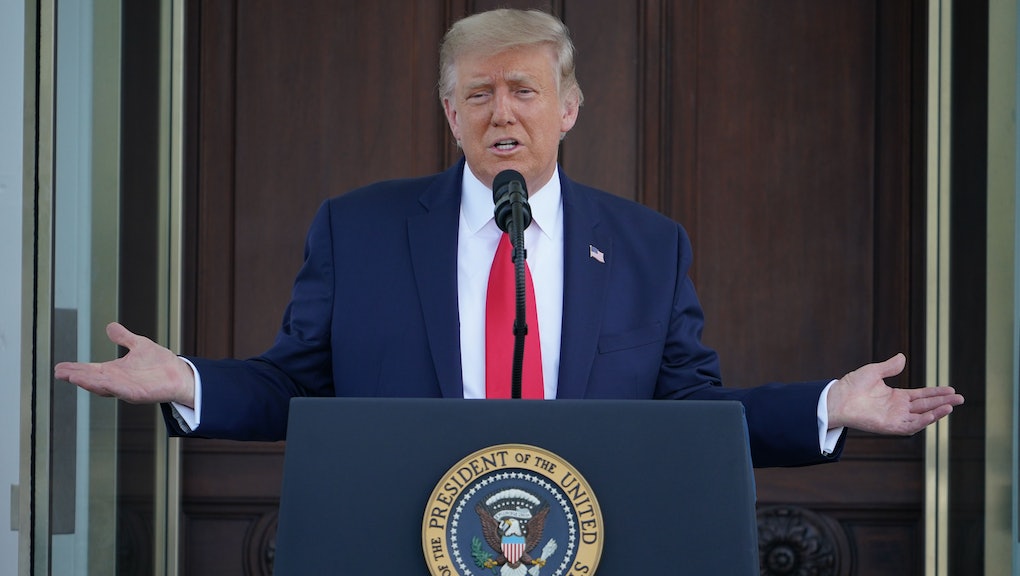 On Wednesday, just as White House Press Secretary Kayleigh McEnany was about to deliver what was sure to be a characteristically sycophantic but ultimately inconsequential press briefing, The Washington Post published a series of damning excerpts from longtime Washington, D.C., institution Bob Woodward's upcoming book on the Trump administration.

Per the segments obtained by the Post, Woodward's book — scheduled for publication on Sept. 15 — paints a picture of a president who not only seemed much more cognizant of the catastrophic dangers posed by coronavirus as far back as February, but one who deliberately lied to the public about those dangers, despite having been told by his then-national security adviser that the pandemic "will be the biggest national security threat you face in your presidency."

"You just breathe the air and that’s how [coronavirus is] passed,” Trump told Woodward on Feb. 7, in audio obtained by the Post. "So that’s a very tricky one. That’s a very delicate one. It’s also more deadly than even your strenuous flu.”

Trump's admission to Woodward came at a time when the president was regularly framing the then-nascent pandemic in decidedly less alarming terms to the public. On Feb. 27, for example, Trump told CNN's Dr. Sanjay Gupta that "we're ready for it." On March 9, he tweeted a message that appeared to portray coronavirus as less of a threat than the flu.

In fact, Trump told Woodward in another taped conversation just days after the March 9 tweet that when it came to coronavirus, "I wanted to always play it down" — a decision that has directly contributed to both the virus's rapid spread across the country, and its growing death toll, as simple preventative measures such as wearing masks and social distancing have been attacked by the president's supporters as somehow imposing upon their freedoms.

When McEnany finally took the podium in the White House briefing room Wednesday, long after the press conference had been scheduled to begin, she explicitly claimed that Trump had "never downplayed the virus" despite his admitting — on tape — that that had been his plan all along.

"I don't want to be a negative person," he added at the time.

The confirmation that Trump had deliberately wanted to "play it down" is just one of the many shocking anecdotes obtained by the Post ahead of his book's release. (He also later told Woodward that "the virus has nothing to do with me. It’s not my fault.")

In another portion, Woodward describes a conversation between former Secretary of Defense James Mattis and former Director of National Intelligence Dan Coats, in which, per Woodward's account, Mattis ominously warned Coats that "there may come a time when we have to take collective action" in the face of Trump's "dangerous" and "unfit" leadership.

Unfortunately, Woodward's revelations, alarming as they may be, are tempered by the fact that they could have been made public months ago. Had Woodward shared this information widely, it could have potentially saved thousands of lives; instead, the president's own minimization of the pandemic was allowed to reign unchecked. Similarly, if Mattis and Coats were alarmed enough to seemingly hint at needing to consider a coup against Trump, they should get no credit for their concern if neither of them did anything to publicly raise the alarm — and certainly not if they failed to take proper accountability measures during their time occupying some of the nation's highest offices.

Ultimately, it remains to be seen whether this latest scandal will actually move the needle against the Trump administration, or if it will simply join the many, many, many other damning revelations that have utterly failed to put a dent in the president's approval ratings to date. There has been a seemingly endless stream of books and juicy revelations, but relying on salacious tidbits publicized by authors hoping to juice sales may not be the best way to save the republic.

More like this
Vaccines are good. Threatening to evict someone over them is not
By Rafi Schwartz
I never want Tucker Carlson to stop talking about Nicki Minaj's cousin's friend's enormous balls
By Rafi Schwartz
Wow, Donald Trump is actually following through on a threat to sue someone
By Rafi Schwartz
Stay up to date