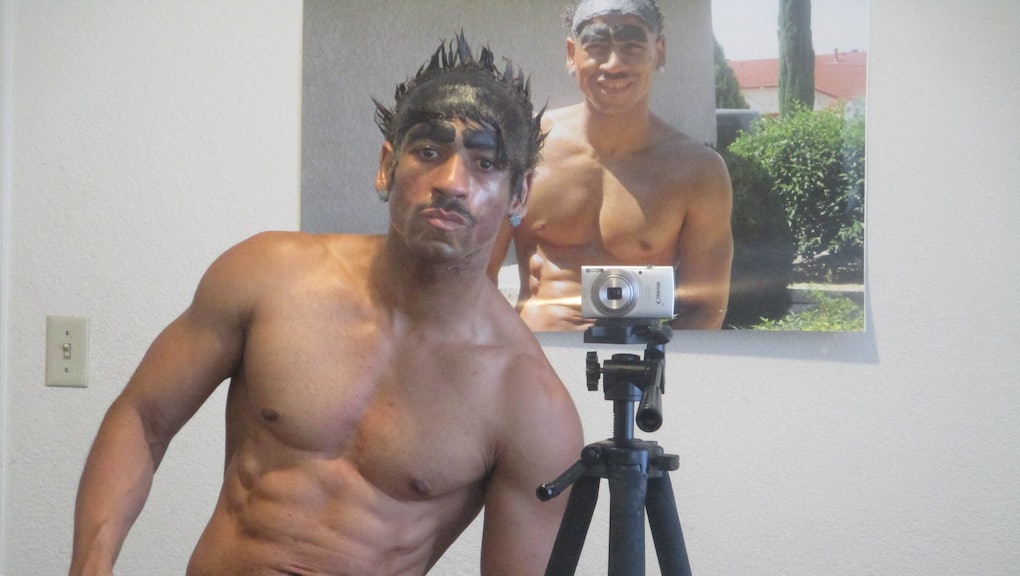 Buff Correll can make a believer out of anyone. The 40-year-old dancer, singer, and bodybuilder is known for lo-fi home videos in which he performs karaoke renditions of popular songs in front of his bedroom mirror. He pops, locks, glides, and body rolls to a repertoire that includes Tame Impala, Doja Cat, Death Grips, The Smiths, and Kate Bush. His singular style and charisma make each of his more than 1,300 videos as compelling as the last. But behind the six-pack and fancy footwork, Correll Coy Bufford II is a man who took a long and unlikely path to become who he is now: a motivational icon who happens to be able to dance his ass off.

Correll uploads several videos per week to his YouTube channel. His song selections are based on feedback from his 341,000 subscribers who send him requests like a human jukebox. He admits that he typically doesn’t know the songs or artists before researching them, but he enjoys the discovery of the exchange. “A lot of artists have come through [in the requests] where I go ‘That's a joint,’” he says. Inversely, it excites him to see younger people learn about the music he loves. “People from the newer generation are starting to know who Phil Collins is, and who Stevie Wonder is. That’s pretty cool.”

In a digital ecosystem that feeds on shame and fetishizes illusions of perfection, as with TikTok dances, manipulated bodies, and the overall scourge of influencer culture, Correll stands apart. In some ways, he feels like a relic of an Internet era gone by. His lack of self-consciousness recalls a less cynical experience of being online; before social media gave way to a hierarchy rewarding the imitation of familiar tropes.

Born in Torrance, CA, Correll and his family moved around a lot thanks to his father’s military service. They eventually settled in Sierra Vista, AZ, where Correll still lives today. A hyperactive child and self-described class clown, Correll struggled in school because his academic performance was less important to him than putting on a show for his classmates. “I got an A in [entertaining] and F in everything else,” he says. “It really made me understand who I was, what I had, and what I could accomplish as I got older.” Correll credits his father with fostering a love of music early in life. “He used to sit me and my brother down and play music for us all the time,” Correll says. “And he’d always tell us to dance.”

After his father passed away in 1999, Correll enlisted in the Army to honor his memory, but military service proved to be a challenge he was ill-equipped for. “I found that although we were all wearing the same uniform, I wasn’t like everybody [else],” he says. He struggled to keep up, and had a hard time connecting with others. “I was by myself and isolated from everybody. It was really lonely for me. I didn’t have nobody to talk to.”

By the time he returned to Sierra Vista, three years later, Correll was depressed. “I was drinking and smoking and I didn't know where I was going anymore.” After an incident where he was almost shot, he decided it was time to make a dramatic change. On Thanksgiving Day in 2007, he quit smoking and drinking cold turkey, and vowed to get in shape: “I called up a trainer the next day and I said, ‘I want abs.’” He took on a rigorous training regimen, which he began documenting and sharing on YouTube, along with occasional dance videos. In a 2008 clip titled “ABOUT CORRELL,” posted to his old YouTube account correll11, he recounts this turning point with an admirable level f sincerity. He’s also scarcely recognizable to the Buff Correll we know today.

Reclaiming his physical and mental health changed Correll’s outlook on life and inspired him to strive for more. “I didn’t feel [badly] about myself anymore,” he says. “I felt like I could take on anything.” His transformation brought him such pride that he taped shirtless photos of himself to his bedroom wall to celebrate his progress. Meanwhile, a brief stint in a local music group called 520 Boys (which he describes as “a rap group, but also New Edition,”) reignited Correll’s love of performing. He decided he should approach his singing and dancing the same way he had fitness: by putting in 10,000 hours.

Correll stopped posting bodybuilding updates on the correll11 YouTube account in late 2008. When he re-emerged five years later — on a new account and with a new physique — Buff Correll was officially born. Just as he had chronicled his fitness journey, Correll began documenting his music practice. “I just kept looking in the mirror and saying, ‘I'm going to learn how to dance in front of this mirror and learn how to sing.’ And gradually I did it,” he says. “I don't know if I'm the greatest singer in the world, but I know it sounds better than where I started.” The videos were another self-portrait where Correll could see his hard work was yielding the progress he wanted. “This is a kind of ritual to show that improvement and [give me] confidence,” he says. Once Correll gained enough confidence in his singing to start dancing simultaneously, he never looked back.

Correll’s dance moves, which he improvises in every video, draw from a variety of influences — Justin Timberlake’s ouvré, Turbo and Ozone from the 1984 film Breakin’, a dash of Justin Bieber — interpreted with a kinetic precision all Correll’s own. His singing, though less technically impressive, is no less impassioned. Correll’s vocal prowess, or lack thereof, is peripheral to the heartfelt energy that makes his performances so compelling. After his emphatic and off-key cover of Beyoncé’s “Drunk In Love” went viral in 2014, Correll gained a following that continues to grow.

He has also faced disparagement from those unable to relate to his creative passion. He was booed off stage at an audition for America’s Got Talent, and was the butt of a characteristically cruel segment by hatemonger Daniel Tosh. Fortunately for Correll, and for those who appreciate his work for what it is, he’s developed thick skin. He recalls the reactions to his singing when he first began practicing while working as a janitor. “That really drove people crazy. I'd be cleaning and singing all the time,” he laughs. “Some people [were] jamming to it and some people [were] like “Shut up!” I didn’t care. I had to get the singing down. I started singing everywhere I went.”

As Correll has remained prolific over the past six years — significantly longer than the average cultural lifespan of anyone dubbed a human meme — his critics have mostly fallen away. Still, a belief persists that Correll must be insincere or unwell to put himself out there as boldly he does. A Google search beginning with “Is Buff Correll” generates “a joke,” “a troll,” and “mentally ill” as suggested queries. The idea that irony or instability would be more credible than the reality — a grown man earnest working towards a spiritually-motivated creative pursuit — speaks to the type of posturing the Internet has accustomed us to.

His lack of self-consciousness recalls a less cynical experience of being online; before social media gave way to a hierarchy rewarding the imitation of familiar tropes.

Nonetheless, Correll remains unfazed. He has bigger goals ahead of him. He wants to put on concerts. He wants to record an album of his own music. He wants to be featured in a fitness magazine. He wants to have a dance school where he can educate and encourage others. No matter what, he wants to continue being the best version of himself, and sharing it. “I just wanna get out there and share my energy,” he says.

That generosity of spirit, along with his determination, enthusiasm, and vulnerability is what makes Correll’s work meaningful beyond its entertainment value. He embodies the aphorism that perfect is the enemy of good. Accepting failure is an inevitability on the road to any goal worth pursuing. “Go ahead and put yourself out there, [even] if they boo and laugh at you,” he advises. “Anything you want in life is gonna take that. It helps you get better in life.”

More like this
How “stoopers” turned New York City sidewalks into trendy, sustainable thrift shops
By Jasmine Vojdani
The NFT gold rush, explained by the world's first meme manager
By Kara Weisenstein
He made a cryptocurrency called SCAM. Now he's trying to make it legit
By AJ Dellinger
Stay up to date