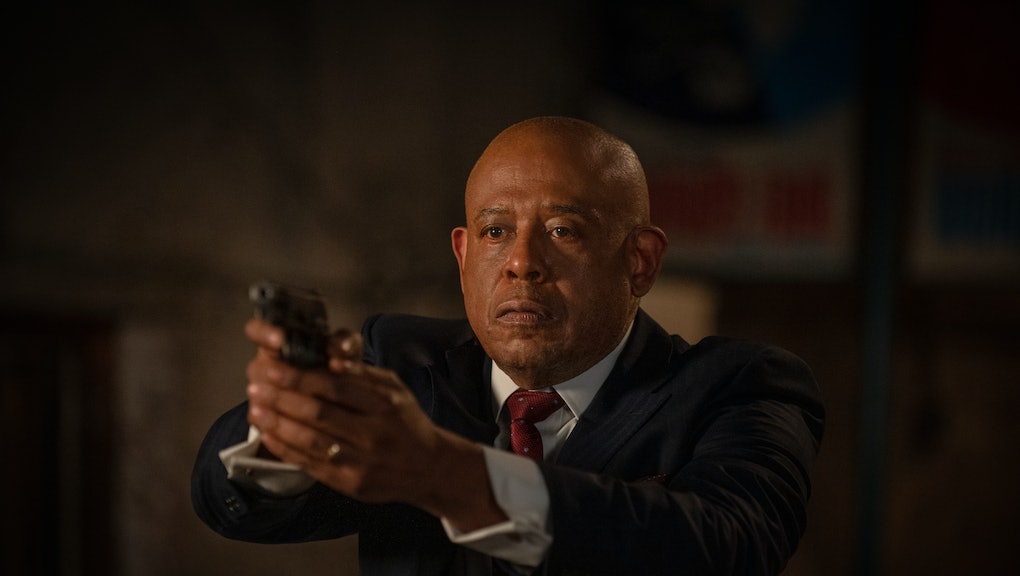 Bumpy Johnson is the prefect archetype of a Black anti-hero

“We always look at gangsters like they're not human beings.”- Godfather of Harlem creator Markuann Smith

The 2010s was the decade of the anti-hero. Between 2010 and 2019, Mad Men's Jon Hamm, Breaking Bad's Bryan Cranston, Succession's Brian Cox, Golaith's Billy Bob Thorton, House of Cards's Kevin Spacey, and Boardwalk Empire's Steve Buscemi took home most of the Golden Globe Awards for best actor in a television series drama for portraying protagonists that were actually dicks. Cranston's portrayal of chemistry teacher turned drug kingpin Walter White was the perfect archetype of an anti-hero: a TV protagonist who starts a meth empire for his family's financial future by bending his moral code to condone his heinous actions until he begins identifying with immorality rather than justifying it. As perfect of an anti-hero as Walter White was, he and other popular anti-heroes such as Spacey's authoritarian fourth-wall breaking Frank Underwood aren't good examples of anti-heroes for Black people.

The world didn't make White turn to meth; he was diagnosed with lung cancer and chose to manufacture meth because he saw how profitable it was, but he had the privilege of at least looking for other options. Him being a mild-mannered, unassuming white man afforded him the luxury of flying under the radar — and not once in the 62 episodes of Breaking Bad did he have to reconcile his place in America as a white man with his actions, even as he was robbing and killing hispanic drug dealers. White was a gangster, but also a conduit for a nuanced look into the machinations of the white anti-hero. Meanwhile, aside from exceptions like Michael K. Williams' Omar Little on The Wire, Black gangsters are usually portrayed as one-dimensional opportunists who will evict people from an apartment complex to turn it into a drug house without any attempt at moral justification, a la Nino Brown from New Jack City.

And then Godfather of Harlem came.

"With Bumpy Johnson, he has so many layers to him. He’s not just a gangster. He’s also a philosopher. He read Shakespeare and [Friedrich] Nietzsche. He didn’t come to New York to become a gangster. He had the complexities of a Walter White or a Tony Soprano," Godfather of Harlem creator Markuann Smith told Mic.

Epix's drama series Godfather of Harlem is unlike anything else on television. Set in 1960s Harlem, New York, the show follows infamous Black kingpin Ellsworth Raymond "Bumpy" Johnson's (Forest Whitaker) attempts to take control over Harlem from the Genovese crime family as he tries to live a normal life as a family man. Johnson extols the liberating virtues of Black drug dealers forming a network referred to as "10 Harlems" independent of the Italian mob. Johnson also has to reconcile the moral quandary of having a daughter he's estranged from due to her addiction to the heroin he sells. He's a philosophical gangster, loving madman, `adulterous family man, and a Black man in America. And the perfect archetype for the Black anti-hero.

Anti-heroes are inherently conflicted characters forced to see themselves as both a savior and villain. For even the average Black person, reconciling who you are with what the world says you as is almost a birthright in America. Living freely, voting, attending well-funded schools, and gaining employment regardless of race were all at one point against American law, practically forcing Black people into what Black scholar W. E. B. Du Bois considered "double consciousness," an internal conflict between Black people viewing themselves through racist American standards as well as through their African heritage. Black people have never been able to just be Black without being aware that a police officer may shoot them during a routine traffic stop, or of which neighborhoods systemically discourage Black residents. This was true when Emmett Till was murdered in 1955, and when George Floyd was murdered in 2020.

“If you look at what is happening in the 1960s and what’s happening now in America, it’s so similar," Smith said. The Harlem Riots [of 1964] are our riots happening down south right now. Their Malcolm X and Ali is our Colin Kaepernick. It’s history repeating itself.”

In American history, Ellsworth Raymond "Bumpy" Johnson exists between myth and man. There isn’t an encyclopedic archive of books by everyone from his nieces and grandmother to journalists documenting his life, as is the case with Italian crime boss Al Capone. His legacy permeates American culture as much in the whispers of him helping prisoners escape from Alcatraz while serving a 15-year prison sentence as they do in the relatively few articles, books and jail records that Smith studied while crafting the Harlem kingpin.

This lack of publicly available information, paired with Hollywood's perpetual infatuation with mob history, created a character vacuum of uncomplicated dramatized depictions to fill in the gaps. It's difficult to show the complexities of a Black gangster as an anti-hero struggling with reconciling his multiple identities when you mostly know them through their illegal exploits. “There wasn’t much out there on Ellsworth Raymond Johnson other than what you saw on a movie like The Cotton Club or American Gangster, which is all Hollywood because Bumpy didn’t die in front of 25 RCA TVs talking about Pepsi was the best product."

Battle With The World Around You

In Season 2's 7th episode, "Man of the Year," Malcolm X sits down with Bumpy and describes him as a "man of many contradictions" pointing to how Johnson can "write poetry in the morning and yet you slash someone's throat later in the day." Indignation bubbling under Johnson's trademark stoicism paints his face when he points out the former criminals in the Nation of Islam are no better than him just because they converted to a religion he considers an "opiate of the masses." After Malcolm implores Johnson to allow the good parts of him to overtake the bad by embracing the truth of who he is, Whitaker untangles the web of responsibilities he has for people being fed, going to school and surviving before delivering one of the most astute breakdowns of the psyche of not just a gangster, but a Black man in America.

"I know how the world works. I can't have just one personality, I got to have many or else everything I care about, everything I hold dear, everything that is in my heart, just goes away," Johnson said in the episode.

Unlike with white anti-heroes who mostly have to be cognizant of the moves of their enemies, Black anti-heroes in America often have to be cognizant of the country they live in because their race makes them a target just as much as their actual illegal actions. This is where the traditional portrayal of Black gangsters veers more into one-dimensional villain territory: the characters usually reign in mostly-Black, urban areas, making their enemies their own people and rarely seen battling the white gaze. That isn't a uniquely Black experience, but being a Black man trying to progress through life facing off against white organizations is. Bumpy's a Black gangster accepted by the Italian mob families in Godfather of Harlem, and he also does battle with them in order to achieve his ultimate goal of taking over Harlem. He poisons his people with heroin in order to prove a Black man can surpass a white institution and return Black people to Harlem prominence.

To create a Black anti-hero such as Bumpy, the Godfather of Harlem team meticulously built a complex man who adapted to the conditions of his time. Johnson moved to Harlem as a teenager and had intentions of becoming a lawyer before Smith says Johnson was denied financial aid from a bursar office because he was Black. Bumpy Johnson wasn’t created by Ellsworth out of a selfish refusal of conventional ways of living, a la a Nino Brown. He became an anti-hero because he was a product of a time period when wrong was legal, so he decided to play by the rules of those in power to live a life worth living. “Bumpy was a caterpillar that turned into a butterfly," Smith said. "It wasn’t a beautiful butterfly. It was a butterfly that had to learn how to fly around and live in its environment."

Within this struggle between evil and good, Whitaker developed a character who is as merciless as he is methodical. “Forest took a blank piece of paper and, line by line, he developed Bumpy,” Smith said. “He had to sit down and create a character of who he believes Bumpy would be: somebody who was strong but wasn’t just a gangster.”

This is why Godfather of Harlem is essential viewing. Beyond seeing a Black gangster blow pounds of heroin out of a slab of meat and use the Nation of Islam to inadvertently help him regain his drug empire, it's a chance to finally see how Black history has already produced characters as complex as the fictional white anti-heroes at the center of the prestige television era. Bumpy Johnson is a maximalist representation of the internal battles Black people have between doing what's right, doing what's self-persevering, and doing what's going to allow you to have a future in a country that never really wanted us.

“I looked at him as a man torn between good and evil. He’s trying to justify his good without forgetting about the evil he has to do.”

More like this
Even in death, Michael K Williams was, and still is, Brooklyn for life
By Keith Nelson Jr.
Colin Kaepernick's new Netflix documentary highlights the man behind the icon
By Keith Nelson Jr.
The bittersweet success of 'Shang-Chi' after a year of pandemic-fueled Asian hate
By Brandon Yu
Stay up to date