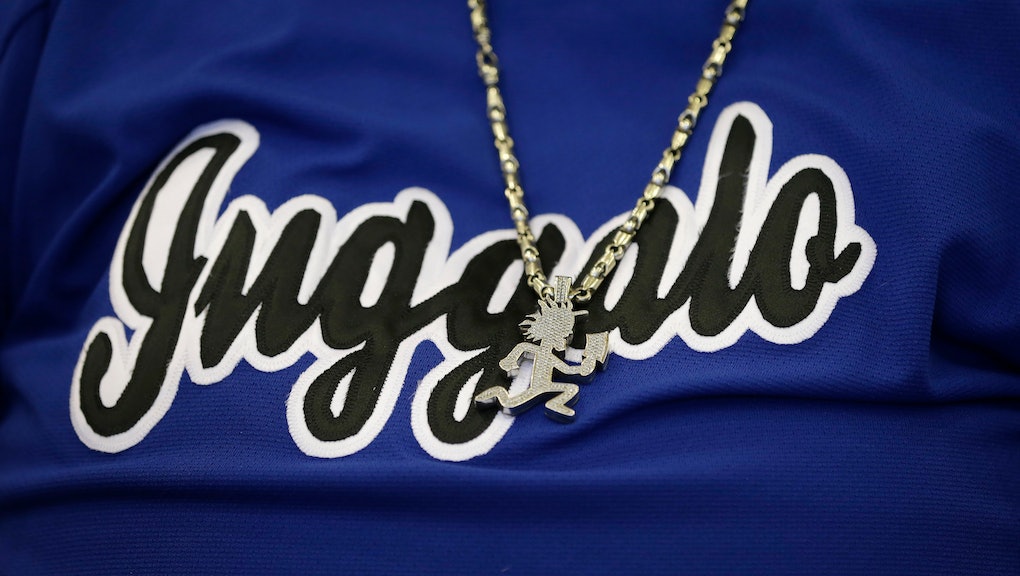 Unpopular opinion: I’ve gone to Burning Man four times, Gathering of the Juggalos once, and I have to say it. I’d rather be a Juggalo than a Burner. There are a lot of similarities, of course. Both get a lot of judgment for being wild parties, and in many ways, that’s a fair assessment. Both are potentially dangerous for your physical well being, as they encourage guests to take risks — like sliding down a carpet covered wedge into a concrete hard playa, or taking at least a couple of bottles of Faygo to the head.

Juggalos, in case you are unaware, are typically fans of the band Insane Clown Posse, a horrorcore duo out of Detroit that came into their own in the 90s. Not all self-identified Juggalos are ICP fans, as the genre has spawned lots of other artists who directly or indirectly owe the success to the intensity of the Juggalos' “wicked clown love”, but the majority at least started their journey with the Dark Carnival. Gathering of the Juggalos is an annual festival founded by the Insane Clown Posse in 2000, where Juggalos come together for a family reunion to dance in the Faygo rain with about 10,000 of their closest homies. Speaking of Faygo, I’ll admit that’s one thing Juggalos fail at — leaving no trace, something Burning Man holds very dear even if some Burners fail at the value.

Juggalos, on the other hand, definitely tend to leave a trace. Sometimes, that’s graffiti on the port-a-potties. Sometimes, that’s the loud "whoop whoops" you hear throughout the night wherever Juggalos are together. Sometimes (kind of like Burning Man), it’s because the festival ends, like it did this year, with everything on fire. Almost always, it’s the unmistakable sticky sweetness of Faygo, which gets thrown at most ICP shows and, often, when Juggalos are just hanging out — a Faygo shower is an initiation for Juggalos in the same way “embracing the playa” by rolling around in the alkaline dust is for Burners. But Faygo has been known to leave a sticky residue, rotting stage props, which is why they now use diet Faygo instead when throwing it at their audience. A form of harm reduction, if you will.

As Burning Man commences for another year, and as the world furthers its descent into chaos, these two subcultures offer somewhat disparate utopian visions. The Burners offer an organized city that encourages a sense of wonder, interconnectedness, and playfulness. But also one mired in self reliance, increasingly only available to the 1%. Juggalos, often saving up money from working class jobs, take care of each other. They do it out of love and out of necessity — their temporary haven is certainly chaotic, but you know that, like a mosh pit, you will be carried to safety if you fall. For me, there’s a clear winner on which side I’d rather be on.

If leaving no trace isn’t Juggalos strong suit, they certainly pull ahead in other areas. For example, Juggalos are way better at gifting — they will give you the shirt off their backs, literally. Wherever I’ve gone, Juggalos have been quick to offer me crash space, food, a guide around the city. It’s not a give and take the way I’ve often witnessed at the burn, where a gift is really just an agreement to trade swag. Juggalos have very little but they’ll give it to you anyway because you need it more. Many Burners seem to gift to show off, at best, and to entrap you into owing them at worst.Juggalos are also better at the Burning Man value of radical inclusion — you particularly see this around body positivity, where fatness and disability are far more accepted and even celebrated among Juggalos. While Burners claim to be accepting, it’s thin, pretty, young, white, cisgender, able-bodied members who get most of the attention at Burner events (unless you are considered some sort of Burner celebrity). Juggalos will shout “show me your butthole” at literally everyone with genuine enthusiasm. Burners play too nice with the police, too.

The fact that telling people that they might imbibe drugs could get you nabbed by an undercover cop (which has happened to a friend of mine) makes me nervous at Burning Man, especially as someone who is uncomfortably sensitive to THC. Meanwhile, at Gathering, not having cops roaming the festival is important, so they typically book the festival in private spaces where cops on the grounds aren’t allowed (though cops absolutely keep an eye on the entry points, ready to pounce on any infraction). This is especially important as Juggalos are still considered gang members according to some police precincts in the US — Virginia being the most recent to admit this formally.

As a queer anarchist, cops have never felt safe to me, and being able to relax at a festival because I’m not worried about police interaction has been refreshing and highly welcome. Sure, inter-Juggalo violence occurs, but the community tends to police it themselves. As an example, at Gathering I saw one guy yelling at his girlfriend, and noticed several Juggalos paying close attention, ready to intervene if she needed it. Had the police or security been involved, there would be longer term legal consequences and a possible escalation of force that wouldn’t have been necessary. Community shaming and a willingness to step up was enough.

Another big difference is that Gathering is accessible to the poor. Juggalos take the Greyhound to show up to Gathering, sneak in, and crash on people’s camping chairs, borrowing clothes from other Juggalos, smoking each other’s weed, and eating whatever they can. People share everything they have without worrying about running out. People leave Gathering as poor as they were when they got there, but they got to have a fun party with their friends despite that. It’s a utopian vision that lies in stark contrast to the increasingly luxurious Burning Man, where celebrities and tech startup CEOs brag on Instagram about their “plug-and-play” camps that offer fresh lobster and air conditioning to those who have the $100,000 to afford it.

Juggalos practice radical family values — they take care of each other and have each others’ backs. You’re family, and that’s that. I found it relatively refreshing how I could have so many friends who I don’t always agree with, but can still rely on, whether that be moving boxes or sending a pizza delivery or offering crash space in an emergency. While Juggalos wouldn’t necessarily use words like “mutual aid”, that’s fundamentally what they’re doing — helping each other both at Gathering and throughout the year. Imagine if everyone was a part of Burners Without Borders, a group of Burners who take the ten principles of Burning Man and apply it to disaster relief and other community care — it’s like that, but Juggalos.

You see, Juggalos are Juggalos year-round. Most Burners are just Burners for a party. Once they leave the Playa, maybe they’ll go to a regional or a local dance fundraiser for an art camp… but most Burners I know leave the decommodification and radical inclusion and immediacy values packed in their dusty bins for next year. Juggalos will try to go to every show they can locally, and several big events per year. They embody their values every single waking day, because being a part of the Juggalo family is an ongoing commitment to that family. I think that’s beautiful. Whoop whoop indeed.

More like this
'Exterminate All the Brutes' is a messy, ambitious documentary that ties together genocide, white supremacy, colonialism ... and Josh Hartnett?
By Nicholas Russell
Queen Rihanna marched with the people against Asian hate this weekend
By Kara Weisenstein
March Madness might be over, but the fight for gender justice continues
By Lindsey Darvin, Anita M. Moorman and Ann Pegoraro
Stay up to date