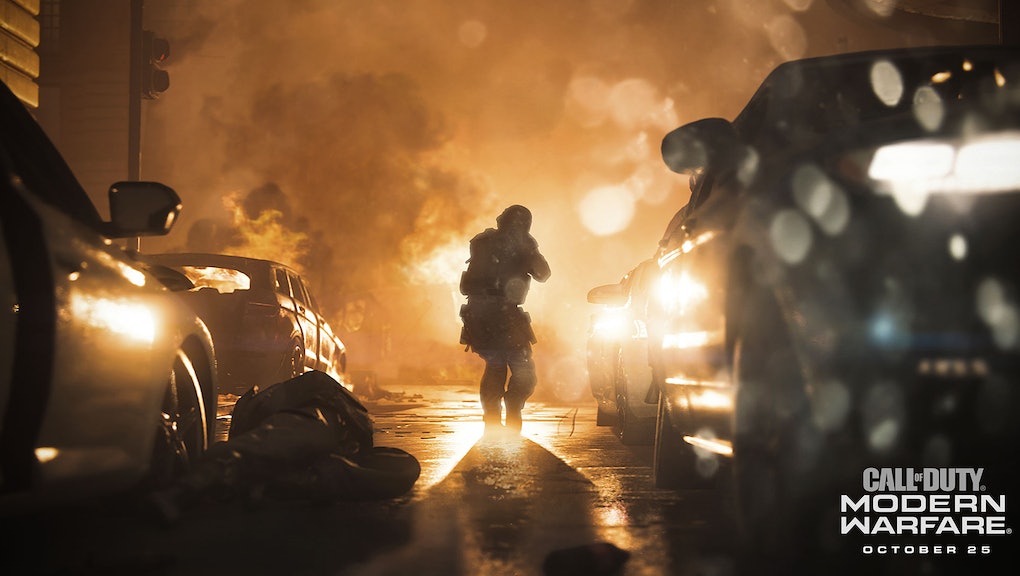 Studio Infinity Ward is taking point on development from Treyarch, which was responsible for 2018's Call of Duty: Black Ops 4, going in a much different direction than the flash and spectacle of the series' previous installment. Players will take on the role of Tier One "operator" characters throughout a "gritty" narrative meant to wrap players up in the uncomfortable realities of war.

Infinity Ward is the same game studio that kicked off the "Modern Warfare" trend, first adopting the subtitle with Call of Duty 4: Modern Warfare in 2007. That particular game was a best-seller, going on to sell 17.28 billion copies in 2007 when it debuted. It has since been resurrected in the form of the glossed-up Call of Duty: Modern Warfare Remastered.

Call of Duty: Modern Warfare will return to the trend of including a single-player campaign, which last year's Call of Duty: Black Ops 4 did not, opting instead to focus solely on multiplayer and the new Blackout battle royale mode. In Blackout, players square off against each other a la Fortnite in an open battlefield to the death, with the last person standing declared the victor.

Instead of focusing on a larger scale of combat this time around with a massive battlefield, Modern Warfare will include close-quarter missions with stealth operations, long-range combat, and other challenges that will force players to think tactical. Throughout a series of covert operations taking place in European cities and across the Middle East, this installment will introduce a "unified narrative experience" with progression that extends across the entire game. That means any sort of experience points or levels earned in the single-player campaign will be viable in the online multiplayer mode or cooperative play modes as well.

Half of the campaign will be told from the perspective of a soldier named Farah, fighting for her home as it's terrorized by a group of Russian soldiers. Activision has noted that the game will operate in a "morally gray" area that will no doubt play these themes to make those interacting wit the game occasionally uncomfortable, as real-life images of war would do.

Things are going to be much different this time around beyond the narrative, too. One interesting change is the fact that Activision will be ditching its usual annual season pass model, which lets players pay a single fee to access all of the content that releases after the game initially debuts. Activision has confirmed there won't be a season pass, but hasn't offered any details on what kind of model will replace the old just yet.

There will also be cross-play support between consoles and PC, which means anyone can play together, no matter what system they purchase the game for. The PC version will be exclusive to the distribution platform Battle.net rather than coming to Valve's Steam digital game store.

There's still more to come, though Activision saw fit to drop plenty of information about the impending Modern Warfare drop this October. If you can't wait to get boots on the ground for the latest thrilling Call of Duty experience, additional details will be filtered out onto the official Activision Games Blog.

Eager fans can look forward to another frenetic shooter experience when Call of Duty: Modern Warfare lands on October 25.

More like this
Scientists are potty-training cows in an effort to save the planet
By AJ Dellinger
The 8 best reality shows you're not watching, but should be
By Brandon Yu
Steve from 'Blue's Clues' gave us the closure we didn't know we needed
By Kara Weisenstein
Stay up to date