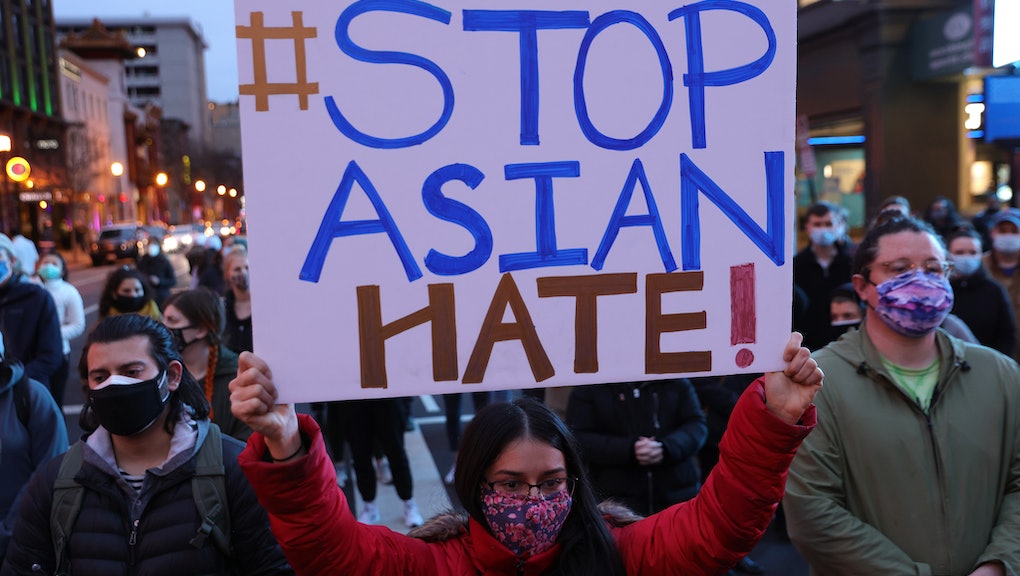 On Tuesday, a white gunman killed eight people in a string of shootings at three massage parlors located in and around Atlanta. Although officials have yet to publicly identify all of the victims, six of the people killed were Asian women. However, following his arrest, the gunman reportedly claimed to police that his attacks were not motivated by race, but instead by a self-proclaimed "sex addiction."

The shooter's own narrative has been swallowed and regurgitated uncritically by law enforcement and the media alike. Capt. Jay Baker of the Cherokee County Sheriff's Office said at a news conference, "The suspect did take responsibility for the shooting. It's a temptation for him that he wanted to eliminate." In reference to the shooter, Baker also said, "He was pretty much fed up and kind of at the end of his rope, and yesterday was a really bad day for him, and this is what he did."

While officials appeared quick to downplay the gunman's actions, others are making clear that it's no coincidence that he mostly killed Asian women. Amongst these narrative corrections, many are attempting to reorient how the shootings are viewed with calls for the attacks to be described as "racial terrorism". The moment joins countless other pushes to refer to white supremacists, and their actions, as domestic terrorism. The same trend surfaced earlier this year, when supporters of former President Donald Trump stormed Capitol Hill on Jan. 6.

On its surface, addressing white supremacy as domestic terrorism seems attractive. White supremacy needs to be recognized as bad, right, and who is worse than the terrorist? So surely it's a victory that, last month, the Biden administration announced plans to expand on grants funded by the Department of Homeland Security's Office of Targeted Violence and Terrorism Prevention to address domestic terrorism. And, surely, if we want to capture the horrific extent of the Atlanta killer's actions, then he must be called as a terrorist and seen for what he is.

But as many pointed out following the Capitol insurrection, this slip into utilizing the state's rhetoric to define and understand white supremacy is a slippery slope. Some scholars argue that this language shift is not the solution, nor will it actually protect the communities who are most vulnerable to white supremacist violence. As Nisa Dang, a Black Muslim writer and organizer based on the East Coast, told Mic in an email, "Referring to white supremacists as 'domestic terrorists' never sat right with me."

For Dang, her discomfort comes from examining the material effects of using the word "terrorist" to refer to anybody, period. Dang explained that while she was working at an immigration law firm, she had to research the number of bombings committed in the United States by Yemeni nationals. Despite there being none, Dang told Mic, "The federal government found a way to use the specter of terrorism to enact its violence and oppressive immigration policy."

"Terrorism is a convenient bogeyman: If ever the federal government finds the need to justify its bombings, drone warfare, torture camps, violations of international treaties and laws, or obscene investment in 'security' infrastructure instead of social welfare programs, 'terrorism' awaits in the wings, ready to serve," Dang continued. "So, when we refer to white supremacists as 'domestic terrorists,' we give the government a mandate to expand its surveillance apparatus and its carceral punishment mechanisms."

The knee-jerk reaction may be to dismiss Dang's analysis. After all, people are calling for the Atlanta shooter and other white supremacists to be referred to specifically as domestic terrorists, not to use them as a reason to target Yemeni nationals or other immigrant communities. However, as Fatema Ahmad, the executive director of Muslim Justice League, told Mic, "The underlying issue is that terms like 'terrorist' or 'extremism' are so vague that they have been consistently used against movements for racial justice rather than in support of them."

"From the early surveillance of Muslims by the FBI in the 1930s, through the Civil Rights era, to today, our communities have been deemed suspect by law enforcement, especially when we stand up for our rights," Ahmad added. Indeed, the vagueness of "domestic terrorism" is what allowed the FBI to declare "Black Identity Extremism" as a form of domestic terrorism.

Beyond the vagueness of these terms, so long as the security apparatus's language defines the way these events are spoken about, any further response to these actions will also be dictated by its logic. In their joint report, Nicole Nguyen, an assistant professor and researcher at the University of Illinois, and Yazan Zahzah, an organizer with Vigilant Love, wrote that "the use of anti-terrorism programs to fight white supremacy ultimately leads to the reinvestment in institutions and practices that harm communities of color."

Perhaps nowhere is this more apparent than with Countering Violent Extremism (CVE), otherwise known as Targeted Violence and Terrorism Prevention (TVTP). CVE began as a general framework to address "radicalization." But in 2011, under former President Barack Obama, it became a federal program housed by DHS. In 2014, CVE launched pilot programs in three cities — Los Angeles, Boston, and Minneapolis, where it mostly targeted Somali youth — before rolling out a grant program in 2016, totaling $10 million per year. Under Trump, CVE was rebranded as TVTP, and his administration planned to use the same debunked anti-terrorism framework to distribute another $10 million in grants.

"We have to focus on systemic solutions."

Following its launch, CVE was criticized as primarily targeting Muslim communities. So, as In These Times reported, the program rebranded itself as aimed at fighting all types of violent extremism; when the first grant recipients were announced, notably included was Life After Hate, a nonprofit that supposedly helps people leave white supremacist groups. In These Times reported that Life After Hate gained increased support as an "anti-racist" organization when Trump cut its CVE funding in 2017, raising hundreds of thousands of dollars via crowdfunding.

But in 2016, the organization had actually applied for a DHS grant so that it could target "jihadism." To put it more simply: Life After Hate wanted to utilize federal money to go after Muslim communities. DHS did not respond to requests for comment from Mic regarding how it would address white supremacy as domestic terrorism without funding programs that also target communities of color.

"To address white supremacy, we have to name it and understand it as a system," Ahmad said, noting that falling back on language like "terrorist" or "extremist" advances an unhelpful "both sides" framing. She added, "There's so much focus on Countering Violent Extremism frameworks after this kind of violence, but CVE frameworks really individualize the issue. We have to focus on systemic solutions that are actually effective." Per Ahmad, that looks like defunding law enforcement and military institutions, which "function as a revolving door for white supremacy."

In the case of the white man who killed eight Asian women this week, if he becomes a "terrorist", he becomes a lone wolf, not a perpetrator of a larger trend of anti-Asian violence. He may be tentatively recognized as a white supremacist, but all focus is given to his motives as an individual — be they sexual or otherwise. He is not seen as a product of compounded violence, of generations' worth of imperialist horrors that the U.S. has wrought upon Asia. No links are made to how sex has been used as a weapon or excuse to target Asian women or to anti-sex work violence, specifically. He is not seen as an extension of The Phoenix Program, a counterinsurgency effort by the CIA in Vietnam that included the use of torture tactics such as rape, nor is he connected to the U.S.'s invocation of sex in the Page Act of 1875, its first-ever exclusion law which banned Asian women due to "lewdness and immorality." That law paved the way for the later 1882 Chinese Exclusion Act.

Similarly to Ahmad, Dang sees the need to turn away from the systems that both maintain the notion of the "terrorist" and protect white supremacy as a whole. "I am a Black Muslim," she wrote to Mic. "I believe that white supremacists will be dealt with, in time. And I also believe that I've been imbued with the power, the strength, and the resolve to combat white supremacy no matter where I encounter it. Allah (swt) has given me the creativity to imagine a world that does not rely on policing to deal with its issues."

To Dang, imprisoning white supremacists will only expand the police state while they are permitted to flourish elsewhere. Instead of investing in prison expansions or surveillance programs under the guise of counterterrorism, Dang said, "The government should be investing our tax dollars back into our communities. People should have access to health care, food, housing, water, jobs that pay above the living wage."

Perhaps most importantly, Dang added: "We should seek to destroy every place white supremacists take refuge, whether it's in police forces or the military, in schools in underserved and underfunded communities, in the media where the narrative is comfortable and familiar. Every place."

More like this
A state-by-state list of racist Confederate monuments that have been removed so far
By Vanessa Taylor
How to deal with racial microaggressions from your partner's family
By Melissa Pandika
The DOJ only prosecutes 17% of hate crime suspects, a damning new report says
By Vanessa Taylor
Stay up to date