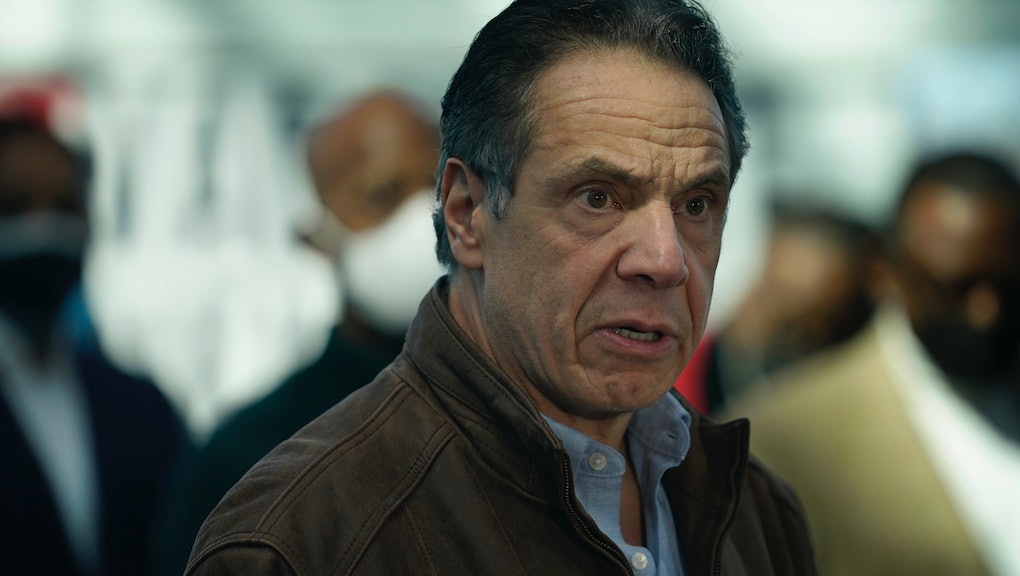 In an abrupt and seemingly coordinated flood of press releases Friday, the majority of New York's Democratic congressional delegation called for Gov. Andrew Cuomo to step down in the wake of multiple sexual harassment and assault allegations.

Among those Democrats now demanding Cuomo's resignation are rising progressive superstars within the party, such as Reps. Alexandria Ocasio-Cortez and Jamaal Bowman, who issued a joint statement citing not only the growing accusations regarding Cuomo's behavior, but also his allegedly grotesque misrepresentation of coronavirus deaths in state nursing homes.

Ocasio-Cortez and Bowman were joined by House Judiciary Chairman and longtime New York Democratic stalwart Jerry Nadler, who pointed out that although the accusations against Cuomo merit a thorough and legitimate investigation, "there is a difference between formal investigations that may end in criminal charges, and a question of confidence in our political leadership."

Rep. Sean Patrick Maloney, the chairman of the Democratic Congressional Campaign Committee, also threw his considerable political weight behind the effort, writing that "20 million New Yorkers need a governor who is laser-focused on getting our state and our people through this pandemic."

And it's not just the New York City's Democratic congressional delegation calling for Cuomo's removal, either. According to New York state Sen. Mike Gianaris, the entire Long Island Senate Democratic delegation agreed that the governor should step down immediately as well. NYC Mayor Bill de Blasio, Cuomo's longtime political foe, and arguably the other major loci of power in the state, also called again for Cuomo's resignation Friday, saying Cuomo "can no longer do the job."

Compounding Cuomo's potentially politically fatal troubles was the fact that Friday morning also saw the release of a deeply reported New York magazine feature detailing the governor's predatory behavior and the cult of personality he's built around himself.

While Cuomo himself has halfheartedly apologized for having made people uncomfortable in the past, he has steadfastly rejected calls for his resignation up until this point. And speaking with reporters during a conference call Friday afternoon, Cuomo continued to insist he was both blameless, and the victim of overzealous political adversaries eager to capitalize on the situation.

"You don't have facts now, you have allegations," he insisted, after paradoxically claiming that as a three-term governor once married to a member of the Kennedy clan and the son of a former governor, he was nevertheless "not part of the political club." He also made a point to insist that he "cannot speculate on motives" of the many, many women accusing him of harassment and abuse. He further insisted that he would not litigate the matter in the press, but rather support investigations into his conduct by both the state legislature and New York Attorney General Letitia James.

Given Cuomo's refusal to step down, and his rapidly eroding standing in both state and national politics, the question now becomes: Is the state legislature prepared to move forward with actively removing him from power? And if not, what else can he get away with now?