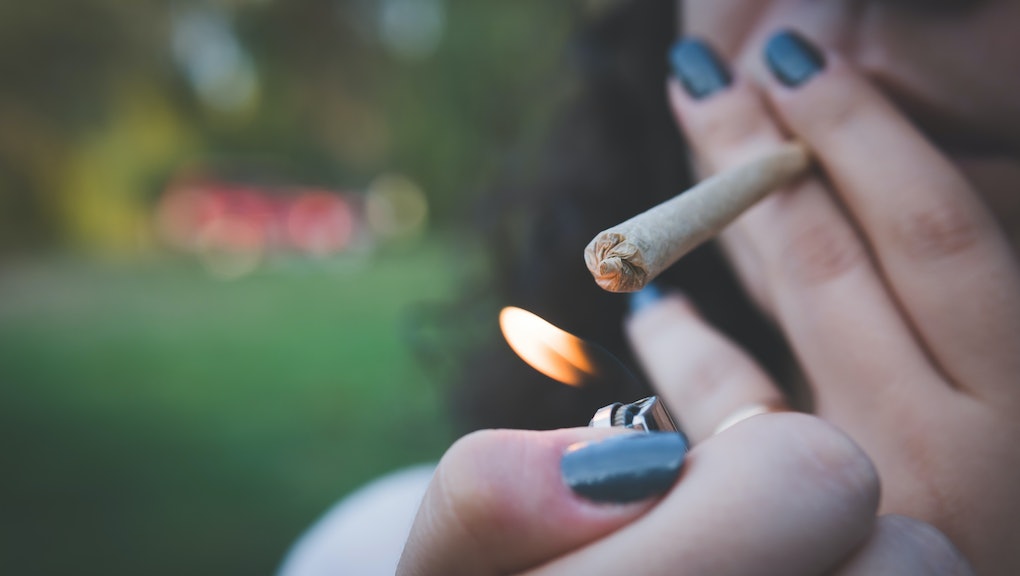 Can delta-8-THC get me high without the anxiety?

Cannabis gets a rep for lulling us into chill, happy baby pose bliss. But with weed, there can be a fine line between soothing and scary. Overindulging can send you plummeting into paranoia and panic. Now, a compound known as delta-8-THC represents an alluring alternative. Known as something of a “weed lite,” it apparently results in a gentler high, without the anxiety.

Because this sounds a little too good to be true — and because I know how big a role marketing can play in claims about cannabis — I turned to Lewis Nelson, chair of the department of emergency medicine and chief of the division of medical toxicology at Rutgers New Jersey Medical School, to help me better understand the buzzy compound. Here’s everything you need to know about delta-8-THC, including whether it really does offer a smoother high.

First of all: What is delta-8-THC?

The compound in cannabis responsible for getting you high is known as tetrahydrocannabinol, or THC for short. But when people say “THC,” they’re typically referring to a form of THC called delta-9-THC, Nelson tells me. Delta-8-THC is essentially another form of THC, with a slightly different structure than delta-9-THC.

The two “are very similar, but differ by a double bond [a type of chemical bond] in a different place on the molecule,” Nelson explains. Both bind to what are known as cannabinoid receptors 1 and 2 (CB1 and CB2), which Healthline says are found primarily in the nervous system.

Like delta-9-THC, delta-8-THC is sold in a plethora of products, including but not limited to tinctures, edibles, and delta-8-THC-infused hemp flower.

Does delta-8-THC really make you high without the anxiety?

He points out that “it does appear that it’s a bit of a mind trick or a marketing technique to make the drugs sound different because they sound like they’re qualitatively the same but quantitatively different." He notes that you can compensate for quantitative differences by taking more or less of a compound. In this case “the more you take of delta-8, the more it looks like delta-9.”

In other words, yes, it’s true that delta-8-THC is less potent than delta-9-THC, meaning it’ll lead to a milder high with fewer side effects than an equivalent (numerical) dose of delta-9-THC, he says. But claiming that delta-8-THC gives you a high minus the paranoia is a bit of an oversimplification. You can’t pop delta-8-THC indefinitely without ever getting paranoid. Take enough delta-8-THC, and you’ll start spiraling into the weed scaries. In contrast, cannabidiol, or CBD, is qualitatively different from delta-9-THC, Nelson explains. CBD doesn’t get you high or nervous, period, so you can take as much as you want without awakening your anxiety.

Got it. So what makes delta-8-THC less potent than delta-9-THC?

The difference in the location of the double bond in delta-8-THC changes the compound’s structure, Nelson says. It’s probably safe to say that as result, the interaction between delta-8-THC and the CB1 and CB2 receptors is less effective than that between delta-9-THC and these receptors. “Small changes in the chemicals have real changes in their properties,” he points out.

Here’s where it gets complicated. Delta-9-THC is federally illegal under the Controlled Substances Act, Discover reported, but there wasn’t an explicit legal ban on delta-8-THC until the DEA revised its list of controlled substances in August. If delta-8-THC is extracted from weed, then it’s illegal, according to the magazine. But many companies assume that if it’s derived from hemp, then it’s legal under the 2018 Farm Bill. Like weed, hemp is a member of the Cannabis sativa family but contains very low levels of delta-9-THC — less than 0.3%, Nelson explains.

The Farm Bill “tried to defined hemp as a legal substance either to get CBD or to use for rope or whatever else you use hemp for,” he says, noting that it didn’t comment on delta-8-THC or the many other psychoactive compounds in the plant. He explains that people have been taking advantage of this loophole with hemp that in some cases has been bred to have a high concentration of delta-8-THC. Whether this is legal varies by state, with some defining hemp as containing no inebriating agents, and others as having a certain concentration of delta-9-THC.

But even if a law “doesn’t say that delta-8-THC is illegal, it doesn’t mean it’s legal,” Nelson says. “I don’t think most people are going to go after somebody that’s using delta-8, but technically, if something happened” — a car accident while you were high, for example — "and they could link it to the delta-8, you could be held accountable.”

The bottom line is, delta-8-THC doesn’t necessarily give you all the benefits of delta-9-THC with none of the downsides. Delta-8-THC can impart a milder high than an equivalent dose of delta-9-THC, but it doesn’t magically protect you from anxiety. And if you do decide to imbibe in delta-8-THC, know that you might be wading into some hazy legal territory, not unlike you would if you were to smoke weed. When it comes to cannabis, and wellness in general, if it sounds too good to be true, it probably is.

This article was originally published on April 28, 2021

More like this
'Nine Perfect Strangers' is a deranged portrait of psychedelic wellness retreats
By Erin Qualey
Uncontrollable, weed-induced vomiting is on the rise, according to new research
By Tracey Anne Duncan
For young people, it’s weed over alcohol during stressful times
By Melissa Pandika
Stay up to date