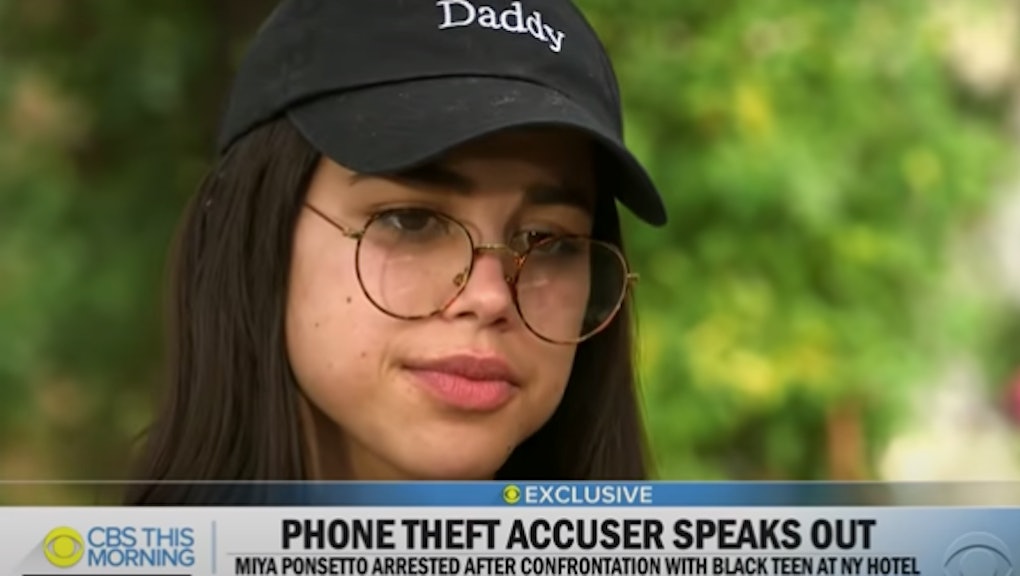 Can people of color be Karens, too? (Yes)

Last month, 22-year-old Californian Miya Ponsetto made headlines as the latest “Karen” after falsely accusing a Black teen of stealing her iPhone in a New York City hotel. In recent years, the Karen moniker has become a catchall term to describe privileged white women who terrorize people of color. When Amy Cooper, a white woman, called the cops on Christian Cooper, a Black birdwatcher in New York, she was dubbed “Central Park Karen.” When an unnamed white woman verbally accosted Alex Beckom, a Black barista, she became known as “Starbucks Karen.”

Ponsetto joined the growing list as “Soho Karen” after apparently racially profiling and physically assaulting 14-year-old Keyon Harrold Jr. But now the 22-year-old and her lawyer are denying that her actions could be racially motivated because of her “mixed cultural descent.”

“She’s not some blond-haired, blue-eyed privileged white lady,” Sharen H. Ghatan, her lawyer, told The New York Times, before Ponsetto was arrested last week. “She literally just wanted to get her phone back.”

The misguided response was reminiscent of George Zimmerman’s argument after he murdered Trayvon Martin, when he used his Peruvian heritage to deny that killing the unarmed teen was racially motivated. Still, Ponsetto doubled down on the claim in a contentious interview with CBS This Morning's Gayle King. "I wasn't racial-profiling whatsoever," said Ponsetto. "I'm Puerto Rican. I'm like a woman of color. I'm Italian, Greek, Puerto Rican.”

What Ponsetto fails to acknowledge is that Puerto Rican is an ethnicity, not a race. You can be Puerto Rican and still be white. But even if she is a person of color, that identity does not preclude her from being racist or committing racist acts.

After her response went viral, many were quick to call out Ponsetto for weaponizing her Puerto Rican identity, including Harrold Jr.’s mother Kat Rodriguez. "Don't we all see right through this act?" she said in a press conference following Ponsetto’s interview. "This woman is a symbol of the privilege that is destroying this country. And now she chooses to embrace the Puerto Rican part of her heritage as an exercise of privilege and convenience in hopes of avoiding a hate crime?"

Harrold, Jr. is also of Puerto Rican descent, but he does not have the same white privilege that Ponsetto has as a fair-skinned Latina.

The attempts people like Zimmerman and Ponsetto make to rid themselves of responsibility and accountability by hiding behind the “people of color” designation erases the unique experiences of different racial groups, especially Black people, in America. As S. Neyooxet Greymorning, a professor of anthropology and Native American studies at the University of Montana, told The New Yorker, “The practical use of ‘people of color’ has also devolved into ‘diversity’ rhetoric, invoked by a white managerial class that may be willing to hire fair-skinned Latinx or Asian expats but not Black people, or by non-Black minorities who lean on the term only when it’s convenient.”

Harrold Jr. is also of Puerto Rican descent, but he does not have the same white privilege that Ponsetto has as a fair-skinned Latina. If he did, he would not have been perceived as guilty of stealing her iPhone without a shred of evidence. This is a reflection of the systemic advantages that come from Ponsetto’s close proximity to whiteness.

White supremacy is a culture of hate that has the power to infect everyone and everything — even fellow POCs.

But these issues run far deeper than viral Karen incidents. They connect to the horrific history of colonization and enslavement in North and South America that was justified by the dehumanization of Black people. By presenting Black people as inferior, white supremacy was able to be upheld through things like the pseudoscience of eugenics, cultural minstrelsy, and the dysfunctional laws of Jim Crow. This insidious belief is more than mere racism — it’s at the root of why Black Americans are more than three times more likely than white Americans to be killed by police and more than four times as likely to live in poverty. It is a culture of hate that has the power to infect everyone and everything — even fellow POCs.

“Anti-Blackness is one way some Black scholars have articulated what it means to be marked as Black in an anti-Black world. It’s more than just ‘racism against Black people,’” writes Kihana Miraya Ross, a professor of African-American studies, in The New York Times. “It’s a theoretical framework that illuminates society’s inability to recognize our humanity — the disdain, disregard, and disgust for our existence.”

Hopefully, the urge to write off women as “Karens” won’t minimize the need to have a deeper dialogue around race. While Ponsetto seems to get everything wrong when it comes to discussing her identity, she has helped ignite conversations about the anti-Blackness that is prevalent in communities of color. Ponsetto’s response to the unnecessary trauma she has instilled on Harrold Jr. shows why it is so important. Instead of denying racism like Ponsetto, non-Black POCs need to work to cancel the Karens in our minds.