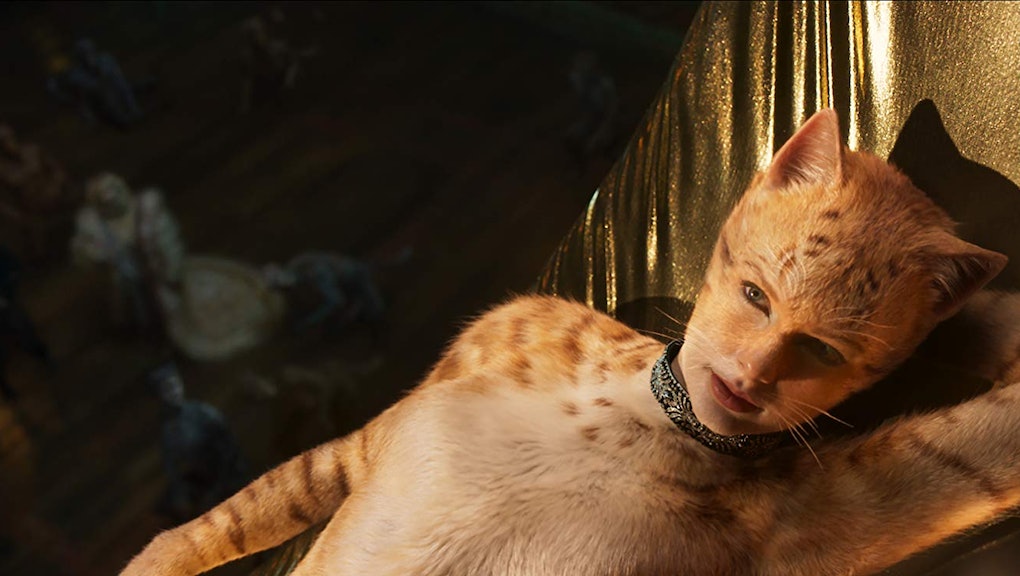 Can stoners save 'Cats'?

Cats is a cinematic catastrophe. The internet collectively called it six whole months ago, when that first terrifying trailer hit the web and we all learned what “digital fur technology” looked like.

The flick’s fortunes didn’t improve as its opening date drew near. Director Tom Hooper told Variety he finished the movie just 36 hours before it premiered at Lincoln Center on December 16. Critics didn’t get a chance to see the film until a couple of days before its wide release. (Even so, the negative reviews came in hot and fast.) Then, a whole week after Cats hit theaters, Universal reissued the film with “improved visual effects” — unheard of for a film already in release.

All the last-minute scrambling couldn’t help Cats land on its feet. Insiders estimate the movie cost $100 million to produce; Universal spent an additional $95 million to $100 million on marketing and distribution expenses. Cats made a dismal $6.5 million domestically its opening weekend ahead of Christmas and failed to gain any traction during the holidays. The film has fallen to tenth place on box office charts, and experts say it’s bound to lose at least $71 million.

One demographic of theatergoer could help staunch the bleeding, however. The Washington Post reported on Monday that seeing Cats high out of your mind has become a bonafide trend. Even when you’re stone cold sober, watching the movie can feel like you’re on a bad trip. But based on the hundreds of testimonials people shared with The Post, drugs evidently make Cats seem either brilliant or far, far more terrifying.

Annaliese Nielsen, owner of an LA-based cannabis brand, called the film “a special kind of evil.” She pre-dosed with a weed blend calibrated for relaxation, but Cats still made her anxious. “I’m 36 and announced, ‘I’m scared!’ to my fellow moviegoers at least seven times,” she told The Post.

Charlotte Clymer, an LGBTQ+ activist in Washington, DC, told the paper she ate THC-infused gummies before her screening and also found Cats terrifying. “Three-quarters of the way through the movie I was like, ‘I hope I don’t hate my own cats when I get home,’” she said.

A 25-year-old from South Carolina named Raina who also did edibles said she couldn’t get over the cats’ fluctuating proportions. Sometimes they appear human-sized onscreen, other times they seem cat-sized, and sometimes they look mice-sized. It’s disorienting. Raina said she lasted 10 minutes in the theater, “and then I went to the AMC bathroom and threw up.”

Most of the folks The Post talked to saw Cats high on marijuana. But the paper spoke with people who did LSD, psilocybin mushrooms, and other drugs, too. A 23-year-old actor named Davis from LA said he and some friends took a huge hit of amyl nitrite, a.k.a. “poppers,” at a pivotal moment. “It was literally as Jennifer [Hudson] screams out, ‘Touch meeeeee, it’s so easy to leave meeeeeee,’ the poppers for all three of us kicked in,” he said. “I felt myself hit the Heaviside Layer like Grizabella, the glamour cat.”

A few other lucky moviegoers said doing drugs turned seeing Cats into a profound experience. “I had a realization part way through that I am the only person in the world who understands Cats, ” a Chicago-based medical researcher named Kate, 31, told The Post. She said she even found herself sketching out a Cats-based doctoral thesis about class warfare in London in the 1930s (when T.S. Eliot wrote his poems that inspired Cats), the 1980s (when Andrew Lloyd Webber wrote the musical), and today. “It doesn’t sound as groundbreaking now,” Kate said, “but please remember I was very stoned.”

Inebriated audiences probably can’t save Cats’ bottom line. As people dive back into the grind of early January, it’s unlikely that they’ll flock to spend money on a film that’s been panned — even if getting high first improves it. Cats will probably get pushed out of movie theaters quite soon, as owners make room for major awards contenders. But as The Post also pointed out, there’s a good chance Cats could ascend to the “Heaviside Layer” and live on as a cult classic.

More like this
The 8 best reality shows you're not watching, but should be
By Brandon Yu
Steve from 'Blue's Clues' gave us the closure we didn't know we needed
By Kara Weisenstein
It never really was about blood or Satan when it came to Lil Nas X hate
By Joshua Topolsky
Stay up to date