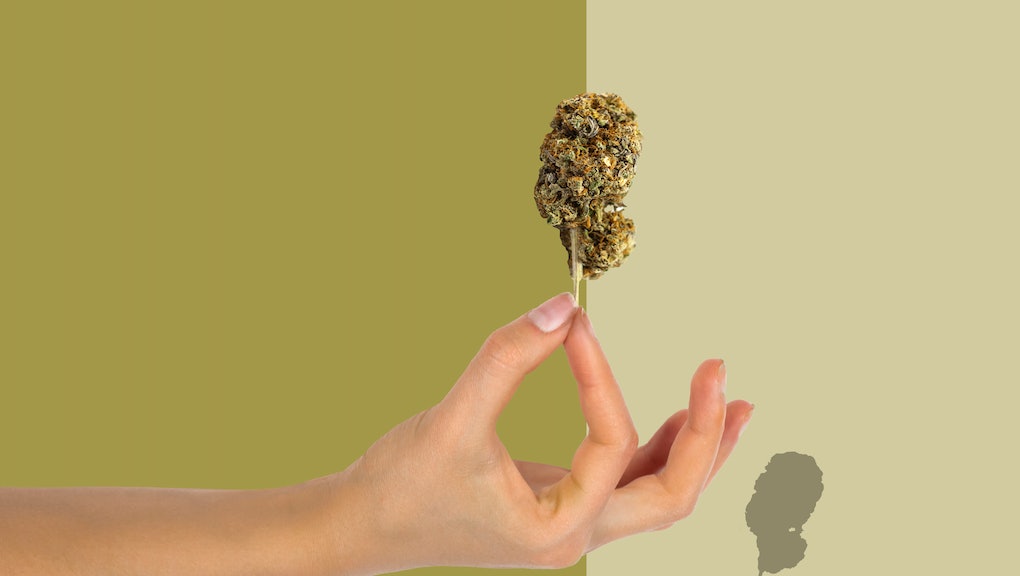 Meditating is a struggle for me. Instead of acknowledging the thoughts that surface and letting them go, I get entangled in them, beating myself up in the process. At the same time, I want to experience the potential mental health benefits of meditation, especially now, at the intersection of a pandemic and a nationwide uprising against a legacy of anti-Black violence by police. The popularity of cannabis meditation classes, and the existence of studies on whether the substance can reduce anxiety, made me wonder: Can weed make meditating easier?

I experimented on myself Monday night, taking my fav cannabis-infused gummy, which contained a low dose of tetrahydrocannabinol, or THC — the compound behind weed’s high — and cannabidiol, or CBD — a non-inebriating compound in the plant that has purportedly calming properties. Once the weed kicked in, I sat on the edge of my bed and followed a guided meditation on Spotify, which involved focusing my awareness on different parts of my body.

As usual, I didn’t feel truly rooted in my bodily sensations until close to the end, but I did judge myself less harshly for my wandering mind (and felt a little giggly, tbh). For all I know, though, I could’ve experienced the placebo effect — in other words, expecting cannabis to help me find my chill might’ve influenced my experience. So I reached out to medical experts to investigate.

Before jumping in, though, keep in mind that using weed in meditation isn’t new. Religious texts known as the Vedas, written in India and dating back millennia, revere cannabis as a sacramental herb. Many scholars and yogis will assert that weed (among other psychoactive substances, of course) has historically been used to broaden people's consciousness.

Let’s start with what happens to your brain when you meditate sober, which can induce a bit of a high of its own, quite frankly. When you’re focused on a task, the task-positive network of structures in your brain gets activated, explains Daniele Piomelli, director of the UCI Center for the Study of Cannabis. But when you’re not engaged in a specific task, and thoughts float in and out of your mind — like when you’re sprawled out, staring at the sky — the task-negative network, a.k.a., the default network, becomes active.

A meditative state doesn't involve focusing on a task — that is, activating the task-positive network, Piomelli says. But it doesn't involve letting your thoughts roam freely — that is, activating the default network — either. In fact, the default network is disabled, or partly so, in this state. Instead, you’d focus on something like a song, sound, or mantra. You’d experience a sense of being above and beyond yourself, or ecstasy, as well as reaching a personal truth.

“You remain conscious of yourself,” Piomelli explains. But “certain preoccupations disappear. Certain anxieties disappear. You now look at yourself, your own brain activity in a different way.” It sounds vague because it is. “It is a very ineffable experience.”

Some psychedelic substances, like psilocybin and LSD, can disable or weaken the default network, leading to a mental state similar to the meditative state, Piomelli explains, and a handful of studies suggest something similar may happen with cannabis.

“There is a little bit of plausibility, but plausibility doesn’t necessarily mean reality,” Piomelli says. For now, “there’s no scientific evidence that cannabis can help in meditation.” It’s possible that weed may even interfere with the ability to reach a meditative state. Until scientists run an appropriately-done study, we just don’t know.

Such a study would involve assigning at least around 10 to 15 participants to take either a placebo or cannabis, and neither they nor the researchers would know which, in order to minimize bias, Piomelli explains. Participants would meditate, then respond to questions about, for instance, how long it took for them to achieve an ideal meditative state and how fulfilled meditating made them feel. Imaging their brains could further minimize bias.

I ask Piomelli whether studies on cannabis and anxiety could point to the substance’s ability to facilitate mediation, in the absence of the type of study he described. Although this research stretches back decades, it has yet to yield a definitive answer, he says. Most studies have been small, for instance; we don’t have the gold standard, placebo-controlled, phase 3 trials yet. There’s “a little more evidence” of CBD having an anxiety-reducing effect than THC, and a still-evolving body of research suggests that combining CBD with THC softens some of the edge of THC alone.

You might want to start with a very low dose of THC, or around three milligrams — enough to make you giddy and a little high, which may lower anxiety.

“I think that one of the problems you see with all the cannabis research is that it’s very poorly designed,” says Lewis Nelson, professor and chair of the department of emergency medicine and chief of the division of medical toxicology at Rutgers New Jersey Medical School. This stems partly from the limitations of doing research on cannabis, such as its illegality at the federal level. Scientists are also typically required to study cannabis only in people who already use it — “who liked the effects of cannabis, so you’re studying a very biased population.”

Nelson notes that adding psychoactive substances like cannabis to meditation could cause the latter to lose most of its health benefits, which may include decreasing stress, as well as anxiety and depression symptoms, according to Mayo Clinic.

If you want to try meditating with weed despite the caveats experts describe, “it’s very reasonable to assume that high doses of cannabis would not be good for meditation,” Piomelli says. You might want to start with a very low dose of THC, or around three milligrams — enough to make you giddy and a little high, which may lower anxiety. But 15 of 20 milligrams, especially if you’re not an expert user, could cause a panic attack.

Piomelli’s warning brings to mind the time I got way too stoned before a cannabis yoga class and wished I could spend the next hour riding out the ensuing dread in child’s pose. My recent attempt at meditation went more smoothly, although I didn’t reach that ineffable meditative state. Still, I felt relaxed, even if I’m not exactly sure why. At the very least, learning that cannabis might not make meditation easier only deepens my respect for it as a practice.

More like this
How to stay sober when everyone's desperate to party
By Tracey Anne Duncan
Wanting to start a family motivated us to pay off $126K in a year
By Marianne Eloise
Can't bear to be in a relationship right now? Blame de-cuffing season
By Suzannah Weiss
Stay up to date