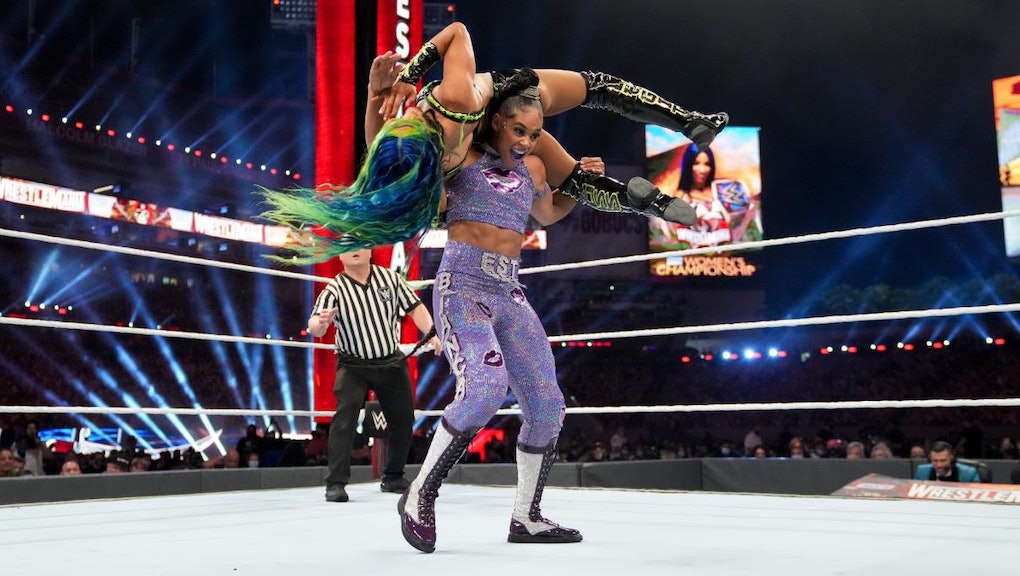 The old adage “every match tells a story” has been hip-tossed around performative fighting circles since pro wrasslin began. As much as the WWE loves to hammer home the notion that something historic happens in every match, it’s usually just ridiculous self-aggrandizement fit for a company of larger-than-life personas. However, the stellar championship match at Wrestlemania 37 last Saturday between the defending Smackdown Women’s Champion Sasha Banks and the Royal Rumble-winning powerhouse Bianca Belair did feel like a tectonic shift in the moment. But Wrestlemania is all about moments; not necessarily evolution. Despite that, the match was simultaneously a metanarrative on workplace conditions at the WWE, as well as an expansion on the ideas presented in a singular match between two exceptionally talented Black women.

The narrative they told included subplots representing common workplace dramas between the historically marginalized old guard — Banks aka “The Legit Boss” — and the new generation trying to make a name for themselves in Belair. It stood as a picture-perfect rendering of the tension between tokenized members of any corporation and gestured toward the respectability politics that has meant erasure for Black women. The only difference here? The new girl can actually lay her paws on her superiors and prove herself worthy of respect in one fell swoop.

When the bell rang, the two superstars stared down one another: Banks in full Boss-mode, with a glib and confident smirk, and Belair damn near brought to tears as the enormity of the moment set in. While 2016’s Wrestlemania 32 was the first to feature women as main eventers — a triple threat match between Charlotte Flair, Becky Lynch, and Banks for the Women’s title — Banks and Belair were able to tell a different story, one about the challenges they’ve experienced due to their race and gender identities. And they delivered at every turn.

While watching the match it’s hard not to get sucked into its subtleties. Banks, the experienced champion sporting an electric green and blue wig, took on the role of a cerebral bully, using her opponent’s most iconic, distinctive feature — Belair’s hair — to beat the brakes off her. In one instance, Banks wrapped the unbreakable braid around Belair’s shoulder as Banks attempted her finishing move, as if to remix the idea that Black hair is not just a distraction but a hindrance to one’s ascension in the workplace. Belair, for her part, displayed the ways that raw power and innovation can, at times, simply be undeniable. At one point, she lifted Banks in an impressive over-the-head press while walking up the stairs leading to the ring, before tossing her in. So much truth lived in the ring that night, it almost belied the WWE’s larger truth: not too long ago Banks was seen as a locker room cancer, and representative of the company’s historic undervaluation of Black women.

Back in 2018, the rumor in the women’s locker room was that Banks had an attitude problem. Perhaps that was because of the large white shadow she had to live and work within while the company pushed 2nd-generation superstar Charlotte Flair to the high heavens. While Flair would be touted as a big stage performer, winning almost all of her championship matches at Pay-Per-View events, Banks became known as a wrestler who almost always lost her Women’s Title when the lights were brightest. Earlier this year, on WWE legend Stone Cold Steve Austin’s podcast, she described the women’s locker room during those years as a “shark tank” that she would only survive with the counsel and support of other Black women like former Women’s Champion (and winner of the inaugural Women’s Royal Rumble) Naomi, and the historically underutilized second-generation star Tamina: “they took me under their wing and guided me so much. They made sure I was safe in the locker room, that I was protected always, after my matches and backstage, and they were the best.”

Banks’ stardom, of course, is at least partially owed to the inroads created by Black women wrestling like Ethel Johnson (the first Black woman to lace up the boots), WWE Hall of Famer Ms. Jackie (Jacqueline Moore), and the hardcore firecracker Jazz (Carlene Moore-Begnaud). Those women’s careers never reached the Banks or Belair’s Wrestlemania height, but they represent a cross generational cohort that exposed the WWE to Black athletics and aesthetics. That Tamina, Naomi, and Sasha have each other’s back in the locker room continues the legacy of sister circles that sustain Black women’s lives.

That solidarity not only kept Banks in the fold — though she did take a long hiatus in 2019 while she battled depression and considered her place at the company — but it shed light on the WWE’s larger truth: a match’s predetermination could signal how Vince MacMahon and the top brass actually felt about certain performers behind the scenes. So, the Wrestlemania match between these two uber talented women should mean that WWE values what they bring to the ring on a nightly basis. However, the metanarrative that WWE looked to tell doesn’t quite match up with the reality. Not just with the Black female talent, but across the company.

Late last year, the UK tabloid The Mirror revealed a list of pay rates for WWE’s top talent. At the top of the list was Brock Lesnar, who at the time was the company’s biggest male star and WWE Universal Champion, earning $12.5 million in base salary, followed by John Cena and Roman Reigns, at $8.5 and $5 million, respectively.The numbers in the women’s division were significantly lower, raising questions about pay equity across both racial and gender lines. Former UFC champion Ronda Rousey, who was a newbie to pro wrestling at the time, beat out every other woman at the promotion earning $1.5 million in base salary. She was followed by the Irish Lass Kicker, Becky Lynch at $1 million, and Charlotte Flair at $550,000. At the bottom of that list sat Sasha Banks and Japanese superstar Asuka, each earning $250,000, despite having a higher profile than many of the other women on the list. When it dropped, there was some uproar about pay equity but it died down as WWE basically ignored the report altogether.

Last September, as wrestlers — like the rest of us — were struggling with both boredom and income loss, conversations about the WWE as a workplace came up again, after Vince MacMahon sent a letter to his talent effectively banning them from using Twitch as a side hustle, writing that “some of [them] are engaged with outside third parties using [their] name[s] and likeness in ways that are detrimental to [the] company.” In response, superstars would play on their actual names so as to avoid any contractual obligation but WWE continued to push them away from the service. The organization even went so far as to fire Puerto Rican superstar Zelina Vega who, after refusing to hand over her Twitch account information and took it a step further by starting an OnlyFans account to interact with supporters alongside her husband and fellow WWE wrestler Tom “Aleister Black” Budgeon. Interestingly, Budgeon, a white man, would remain at the company despite Vega’s departure.

But what does this all mean for the WWE as a workplace? It’s hard to tell. We might not be seeing blackface, Samboism in wrestling gear, or the ugly stereotyping of marginalized communities of WWE’s past, but will the celebration of this historic moment improve the lives of WWE’s employees in a meaningful way? Only time will tell, but if history is any indication, the first Black, or first female, to do whatever in the WWE hasn’t necessarily led to material changes for those superstars.

Tuesday, Bianca Belair’s reign as the women’s champion began. There will most likely be a long monologue given by a celebratory Belair that expresses the magnitude of the Wrestlemania match and its symbolic step forward for Black women in the wrestling business. The writers, through Belair, will, undoubtedly, use race and gender as scaffolding for WWE’s “progress” as a company both in and outside the ring. But that narrative, if it’s worth its salt, must confirm the reality, and so far, whether it's WWE’s long-held resistance to unionization or demanding the end of viewing superstars as independent contractors, the WWE has yet to make that connection. There’s only so far one match’s story will take us, no matter how brilliantly it’s told. At some point the truth has to affirm the fantasy.

More like this
Elon Musk's first foray into comedy was a strange, satirical website called Thud
By Amanda Silberling
Netflix’s ‘Yasuke’ is more evidence that the future of anime is Black
By Terrence Sage
Watch GOP Gov. Jim Justice fully combust when asked why he signed a transphobic bill
By Rafi Schwartz
Stay up to date