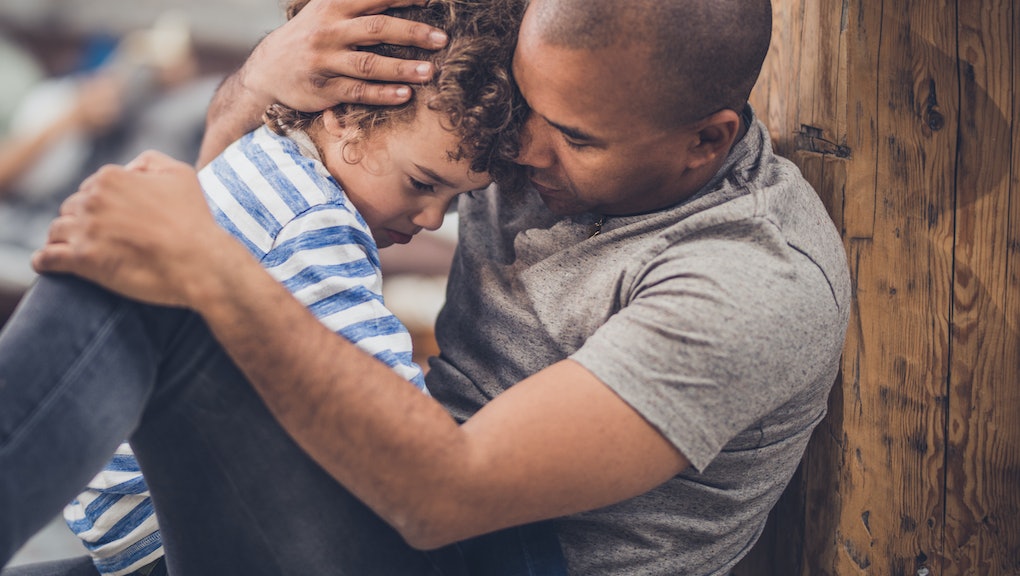 Can you inherit anxiety or depression?

"You were careful," Mom recalls of my infant self. "You always tested the waters." Before easing into any new situation, she says, I needed to know exactly what was happening. Over time, that caution evolved into a constant anticipation of the worst. In adulthood, anxiety wrenched my stomach, drove me to drink to excess, and disrupted my sleep and ability to be still, period. My anxiety probably didn’t materialize out of nowhere, though. Several of my family members show similar tendencies, and my mom says depression runs in her family, too. As I’ve traced the thread of mental illness through my lineage, I’ve wondered: Can you inherit anxiety and depression?

As with most things mental health-related, the answer isn’t cut and dried. Yes, anxiety and depression are heritable, according to the psychiatrists I interviewed. But environmental factors, like early childhood experiences, also play a role, interacting with your genes to influence whether you actually develop these disorders.

Let’s start with anxiety. To be clear, by “anxiety,” we mean anxiety disorders, like generalized anxiety disorder (GAD, which I manage with therapy and medication) and panic disorder, rather than stress in response to, say, a looming work deadline. Anxiety does run in families, which raises the question of whether they do so because of shared environment and culture, or genetics, says James Potash, a professor of psychiatry and behavioral sciences at Johns Hopkins Medicine.

That said, anxiety disorders, like depression and other psychiatric disorders, probably result not from a single gene but a combination of many, many genes, explains Petros Levounis, professor and chair of the department of psychiatry at Rutgers New Jersey Medical School. Each likely exerts a small effect, Potash says, and interacts with others to influence the risk of developing a certain psychiatric disorder. Scientists are working on summing up genetic variants — in some cases, on the order of 100,000 — and creating a score of a person’s overall genetic risk of developing anxiety disorders or depression. “Those scores have some predictive value, but they’re not as precise as we’d ideally want them to be,” Potash says.

To understand how genetics can influence the development of anxiety disorders, it’s helpful to visualize what’s known as the Yerkes-Dodson curve, shaped like an inverted U, Potash says. The x-axis measures stimulation, while the y-axis measures performance. As the amount of stimulation increases, so does performance. (That’s why you often see sports teams hyping themselves up before game time.) At some point, though, performance peaks, as represented by the top of the inverted U, and “when stimulation increases beyond that, it becomes stress,” Potash explains. “Then performance starts decreasing…. That’s clearly one of the biggest elements of anxiety. It’s stimulation in excess of what you can process and respond to.”

For people with anxiety disorders, the Yerkes-Dodson curve peaks toward the left side of the x-axis, meaning even low levels of stimulation trigger stress. Your genetics can influence where this curve peaks for you — your stress resilience, in other words. It’s possible, then, that my genetics might have nudged the peak of this curve to the left, which could partly explain why even minor incidents, like something awkward I might’ve said days ago, stress me out.

Early childhood experiences can also help shape your stress resilience in adulthood, Potash says. “The brain is constantly changing through childhood and part of that change involves shaping itself to be as responsive as it can be to the environment,” so that you worry and relax at the appropriate times. Left unmanaged, GAD makes me worry almost constantly, even on weekends and other times when I’m technically supposed to chill.

Adverse childhood experiences can actually add a certain chemical group to specific regions of your genome, Potash says. These so-called epigenetic changes “can change the functioning of your genes throughout your lifetime,” which, in turn, help determine where that Yerkes-Dodson curve peaks. Although the epigenetic effects of physical and sexual abuse are the most heavily studied, other negative childhood experiences might also affect your stress resilience.

I’ve hypothesized that to some extent, I “learned” anxiety from my parents. When they immigrated to the U.S., they lived in utter uncertainty, and many of their choices carried immense risk. My dad, who narrowly escaped deportation, avoided deliverymen, security guards, and anyone in uniform, fearing they might be immigration officers. He and my mom seemed to instill in me their perception of the world as a treacherous place, forbidding sleepovers and not encouraging me to learn to drive in high school, because who knew what might happen?

Genetics can affect whether you develop depression, too. “There’s no question depression has a genetic component,” Levounis says. Twin studies, similar to those that have looked at anxiety, have revealed a genetic basis for depression. Potash adds that the research on genetics in depression is further along than it is in anxiety disorder, citing a study of more than two million people, published last year, that identified roughly 100 genes implicated in depression.

The heritability of depression isn’t straightforward, though. If your sibling or parent has depression, you have a two- to three-fold higher risk than the general population of developing it, per the National Institutes of Health — yet many whose family members have depression don’t develop it, while others develop depression in the absence of a family history of it. “Depression is probably 35% or 40% genetic,” Potash says.

As with anxiety, environmental factors matter, too. For starters, you can have a familial predisposition for depression, which refers to the effects of growing up in a family where people live with the disorder, Levounis says. That can look like a mother whose depression makes her unavailable for bonding, affection, and everything else essential to raising a happy, well-adjusted kid. As a result, “the kid will have an increased risk of depression and anxiety due not only to the genetics of the mother, but because the upbringing within a depressed family gives you an increased risk.” The women on my mom’s side tend to suffer from postpartum depression, and I wonder whether that could explain the prevalence of anxiety and depression in my family.

Also similar to anxiety, “it is very, very clear” that people who experience multiple stressful life events have a heightened risk of depression, Potash says. Those who develop the disorder “typically have some increased genetic susceptibility to it and that, in combination with stressful life events, leads to depression.” Those who endure incredibly stressful experiences but don’t develop depression likely benefit from their genetics, which may make them less susceptible.

My conversations with Potash and Levounis were validating, bolstering the hunches I’ve had throughout my life with evidence. At the same time, I gained an appreciation of the complexities of anxiety and depression — the dynamic interplay between the genetic and environmental factors that underlie them, and all the questions about them we still have yet to answer.