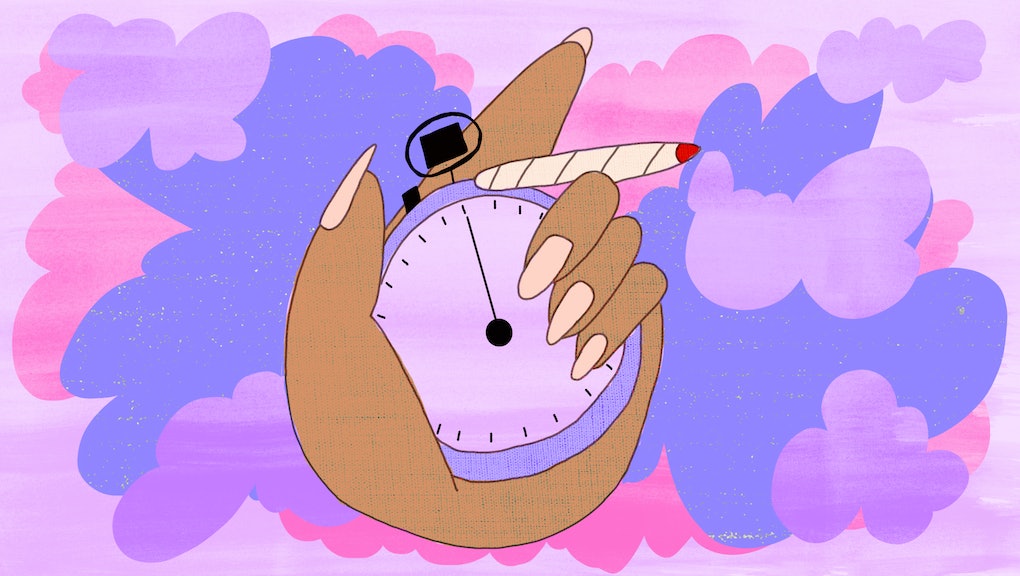 Can you sober up from weed fast? An expert explains

It happens to the best of us: You’re chilling on the sofa, waiting for the edible you took to work its magic — but when it finally hits, so does the awful realization that you are way too effing high. Dread sets in as you question whether your brain will ever return to its previous state. Maybe you need to attend a family hang later, or just don’t feel like being stoned anymore, which doesn’t exactly help your anxiety. You wonder: Is there any way to come down from a high, faster?

Of course, the Internet abounds with questionable suggestions, such as chewing lemon rinds or peppercorns, taking a cold shower, and consuming cannabidiol (CBD), a non-inebriating compound in cannabis that purportedly calms you down. I remain skeptical.

To help me figure out whether it's possible to hit fast-foward on sobering up, I turned to Lewis Nelson, chair of the department of emergency medicine and chief of the division of medical toxicology at Rutgers New Jersey Medical School. It turns out that you can actually bring yourself down — but maybe not in the way you'd assume.

First, let’s consider what it tends to looks like to directly reverse the effects of a psychoactive substance. Naloxone does this with opioids, Nelson says. Used to treat opioid overdoses, it works by binding to the same receptors as opioids do, counteracting and blocking their effects. It’s what we’d call a pharmacological antidote to opioids, Nelson explains.

He cites a 2011 paper claiming that the aromatic compounds known as terpenes found in black pepper, lemon, and other plants act as pharmacological antidotes to tetrahydrocannabinol (THC) — the compound in weed that gets you high — binding to the same cannabinoid receptors and reversing its effects. But he notes that it’s hard to translate the findings in mice and lab-grown neurons that it describes to humans; our systems are quite different.

"There’s no clear and convincing evidence that any of these food substances or herbals... have chemicals that truly reverse the high,” he tells me. In fact, he notes, there don’t seem to be any pharmacological antidotes to weed.

That said, the terpenes in black pepper and lemon might act like physiological antidotes to weed, Nelson explains, similar to how coffee is a physiological antidote to alcohol, snapping you into alertness when you’re drunk. While coffee doesn’t block the effect of alcohol on your neurons, it does stimulate them, he says. “It alters your physiology and wakes you up.”

Likewise, the tartness of lemon and the bite of black pepper can rouse you from your weed stupor. “Whether that counts as being less high, I’m not sure,” Nelson says, “but you can argue that it could have a little bit of a physiological antidote-like effect to sort of reverse the effects of the primary drug.” Taking a cold shower probably works the same way, akin to how rolling down your windows to let in a brisk breeze can help you perk up when you’re feeling drowsy behind the wheel, he adds.

Besides the possibility that it stimulates them physiologically, the placebo effect might also explain why Redditors and others swear by chewing on peppercorns or biting into a lemon to come down from a high. In other words, they might feel sober when they try these remedies because they expect them to be sobering, Nelson says. Plus, biting a peppercorn and sucking on a lemon can be "pretty stimulating and pretty noxious,” which might also make them seem effective.

Nelson says CBD could help bring you back to Earth — but again, if it does, it may be because of the placebo effect or some other psychological phenomenon resulting from knowing that you’re doing something to your body, as opposed to anything the compound is doing on a pharmacological level. The thing is, the sedating, mellowing effects of CBD are marginal, he points out. But if you think it sobers you up, then he doesn’t see a problem with taking it, especially since it doesn’t have a ton of adverse effects.

That’s the general rule of thumb for these remedies to help you come down from your high. “I’m not I’m not even saying they don’t work,” Nelson says. “I think they do work. I think that the question is, do they work because they do something to you, or do they work because you think they do something to you?” Basically do what makes you feel better, as long as it’s not reckless — “don’t put 50 peppercorns in your mouth." Nelson also warns against overdoing it with lemon, which can damage your teeth.

If you want to avoid getting too stoned in the first place, he suggests treading lightly when it comes to edibles. While you can feel the weed within a minute or so of smoking it, you might not feel it for 20 minutes or even longer when you take it in edible form, he notes. Wax, hash, and vape solutions can also have high concentrations of THC, he adds, meaning that even tiny amounts of them can get you high. (The physicians I previously interviewed for Mic still strongly discourage vaping, citing concerns about lung injury and long-term effects that have yet to unfold.)

But especially given that weed contains more THC than it used to, “getting over-high is not uncommon,” Nelson says. The good news is, “most of the time, it just passes.” If you don’t want to simply wait it out, though, cautiously taking something that stimulates and grounds you can help you feel a little more like your usual self.

This article was originally published on June 30, 2021