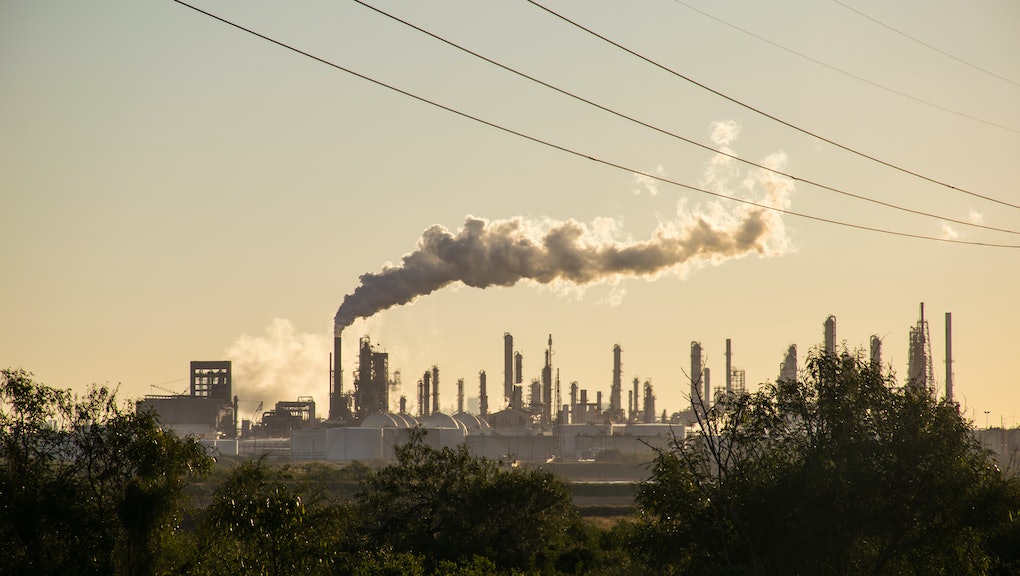 The report, shared by meteorologist and Grist author Eric Holthaus, came out over the weekend, marking CO2 concentrations that have continued to skyrocket over the last 800,000 years.

"This is the first time in human history our planet's atmosphere has had more than 415ppm CO2," Holthaus wrote on Twitter. "Not just in recorded history, not just since the invention of agriculture 10,000 years ago. Since before modern humans existed millions of years ago."

Why is this concerning? CO2 is a type of gas that scientists blame for much of the global climate change Earth is experiencing. Burning fossil fuels, including oil and gas, releases CO2 into the atmosphere. It's referred to as a "greenhouse gas" because of its ability to trap heat. There are actually five greenhouse gases: water vapor, methane, ozone, nitrous oxide, chlorofluorocarbons, and carbon dioxide. All of them can contribute to the Greenhouse Effect, or the process that occurs when the gases in Earth's atmosphere trap the heat from the Sun.

Over time, this trapped heat makes Earth much hotter than it would otherwise be. The effect is needed to keep the planet reasonably warm, but an excess of gases end up with global warming effects, which spells out obvious bad news for our planet. The Earth is said to have warmed about 1.8° F since 1750, and is projected to continue to rise by a startling three degrees, according to the Paris Climate Agreement. The environmental treaty adopted in 2015 by most nations, is meant to help address the negative impact of climate change by calling on the countries with major emissions to cut down the pollution they create in order to reduce greenhouse gases. Under said agreement, it's possible that we could as a species keep global warming within only two degrees. Scientists have reported, however, that there's only around a 5% chance of actually meeting this goal as things stand currently.

Climate scientist Peter Gleick weighed in on the new record levels of CO2 as well, noting that the "last time humans experienced levels this high was...never."

Gleick's tweet was accompanied by a graph he plotted himself, demonstrating that CO2 levels thousands of years ago were indeed as high as some of the levels humans have encountered, but never as ridiculously high as what we're seeing today. "Humans didn't exist," Gleick added. In fact, in the 800,000 years before the Industrial Revolution occurred, CO2 levels never rose over 300 ppm. That certainly isn't the case now.

These dangerously high CO2 levels are in line with numbers reported in a study authored by Benjamin Santer of the Lawrence Livermore National Laboratory in Livermore, California, which offered a 99.9999% chance that humans are the cause of global warming. While these levels are still critical, the future isn't particularly bright for Earth's CO2 emissions. Another study noted that CO2 levels could potentially soar ahead to levels unseen in 56 million years by as early as the middle of next century.

Overall, the worst effects likely won't be seen during the lifetimes of those currently alive, but there's still hope that changing the way we live now can have a huge impact on future warming. The future of the planet is at stake – and we certainly don't want to deal with another similar milestone in the future.