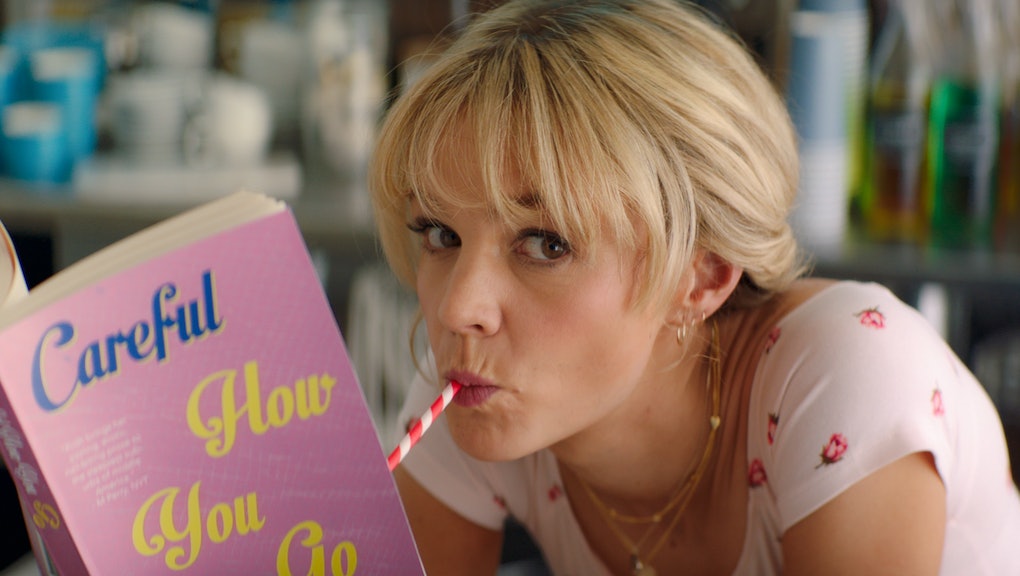 Imagine being actress Carey Mulligan and having some man opine that while you’re talented, he’d rather watch Margot Robbie seduce and shame would-be rapists in your latest film. The darkly comedic revenge movie Promising Young Woman stars Mulligan as Cassie, a woman who fools men into thinking she’s too drunk to give consent for sex, then confronts them when they unfailingly try to take advantage of her. But a Variety film critic didn’t buy it, evidently, and he used his platform to nitpick a woman’s appearance instead of absorbing the larger message of director Emerald Fennell’s brilliant and resonant film.

A whole year ago at the Sundance Film Festival, Dennis Harvey penned a review of Promising Young Woman for Variety that took issue with its casting: “Mulligan, a fine actress, seems a bit of an odd choice as this admittedly many-layered apparent femme fatale — Margot Robbie is a producer here, and one can (perhaps too easily) imagine the role might once have been intended for her. Whereas with this star, Cassie wears her pickup-bait gear like bad drag; even her long blonde hair seems a put-on,” he wrote.

Yikes. Lobbing this sort of superficial critique at Promising Young Woman entirely misses the point and says far more about Harvey than it does about the film. Fennell weaves a sticky and ruthless #MeToo parable with her often-uncomfortable storytelling. She turns her lens on male predation, filling the screen with dudes who swan around purporting to be “nice guys,” then don’t hesitate to take advantage when they think they can get away with it. The film confronts the still-prevalent notion that when a woman winds up in a vulnerable state, she’s somehow “asking for it.” For a male critic to watch this particular movie and then dial in on whether Mulligan is sufficiently attractive for the role is both telling and bizarre. It's also an insight into the ways misogynistic perspectives can pervade the highest strata of media and criticism.

Harvey’s bad take went mostly unnoticed — until last month, when Mulligan started doing press for Promising Young Woman’s wide release. She told The New York Times that the Variety review really bothered her: “It felt like it was basically saying that I wasn’t hot enough to pull off this kind of ruse."

She continued: "It wasn’t some sort of ego-wounding thing — like, I fully can see that Margot Robbie is a goddess." But she expected smarter criticism from an industry thought leader like Variety. “It drove me so crazy. I was like, ‘Really? For this film, you’re going to write something that is so transparent? Now? In 2020?’ I just couldn’t believe it,” she said.

I mean, she’s absolutely right. Writers, particularly critics, are entitled to their (sometimes unpopular) opinions. But Variety’s decision to publish such an out-of-touch critique ironically proves some of the very points Fennell is making with her film, which examines society’s expectations about how women are supposed to look and behave.

“We don’t allow women to look normal anymore, or like a real person,” Mulligan told the Times. “Why does every woman who’s ever onscreen have to look like a supermodel? That has shifted into something where the expectation of beauty and perfection onscreen has gotten completely out of control.”

In the wake of all this, Variety took the unusual step of walking back the review and apologized to Mulligan for the "insensitive language and insinuation in our review of Promising Young Woman that minimized her daring performance."

The actress Zendaya asked her about the whole saga during their conversation for Variety’s “Actors on Actors” series, and Mulligan explained why she spoke up: “I certainly didn’t want to [...] rock the boat with a big publication. But at the same time, you’ve got to stand up for these things. Otherwise, it continues and then you’re essentially part of it,” she said.

“It stuck with me, because I think it’s these kind of everyday moments that add up — that mean that we start to edit the way that women appear on screen, and we want them to look a certain way," she noted. "I think we need to see real women portrayed onscreen and in all of their complexity. So I felt that it was one small thing to point out that could be helpful.”