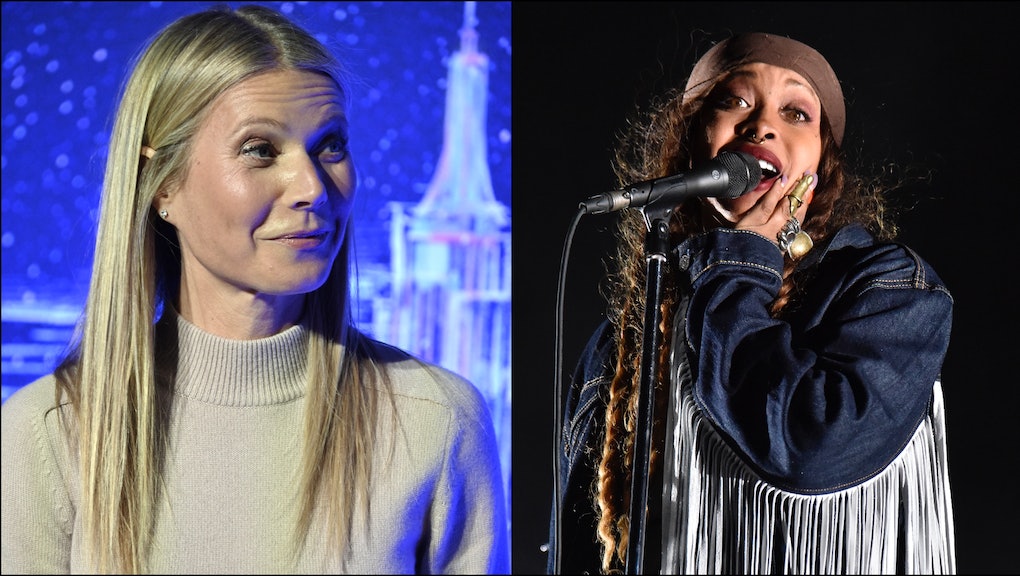 Celebrities are cashing in on our obsession with candles

Gwyneth Paltrow started the year off on a spicy note by hawking (and selling out of) a candle called “This Smells Like My Vagina” on her “lifestyle brand” Goop’s website. Okay, the candle doesn’t literally smell like the actress’ nether-regions. It’s a “funny, gorgeous, sexy” mix of geranium, bergamot, cedar and rose, according to Goop’s product description.

But it still threw the media into a tizzy. “Well, that’s something the press has really jumped on — this idea that the scent is the fragrance of Gwyneth’s vagina. That’s not the case. It’s called ‘This Smells Like My Vagina’ meaning the person that’s holding it. It’s speculative and fun,” the man behind the candle, Douglas Little, helpfully clarified to The Cut.

Yesterday, Erykah Badu caused a stir by announcing her own pussy-scented product: the four-time Grammy winner told 10 Magazine she’ll be selling incense that smells like her vagina — yes, literally — on her soon-to-launch ecommerce platform, Badu World Market. “I took lots of pairs of my panties, cut them up into little pieces and burned them,” she said. “Even the ash is part of it.”

The incense, simply named “Badu’s Pussy,” is an olfactory ode to what the singer calls her “superpower.” “There’s an urban legend that my pussy changes men,” Badu said. “The men that I fall in love with, and fall in love with me, change jobs and lives.” When 10 Magazine asked Badu why she went to such lengths to distribute such potent magic to fans, the singer declared, “The people deserve it!”

The celebrity candle craze extends well beyond those two eccentric examples. A few years ago, savvy Etsy sellers began photoshopping famous faces onto prayer candles, historically a staple of Catholicism meant to invoke the spirit of whatever saint was pictured on the votive. Kim Kardashian caught flack in 2017 for selling a prayer candle with an image of herself as the Virgin Mary on it. Vox connected the trend to the decline of religion among young people but the steady rise of spirituality. In other words, asking for guidance from a long-dead saint may not resonate much anymore, but asking what Cardi B would do in your situation could offer a weird sense of calm.

Honestly, the simple act of lighting candles is a soothing ritual for tons of people. You don’t have to look farther than the retail numbers for proof: the candle industry rakes in around $3.14 billion annually, which isn’t that hard to believe when retailers like Diptyque and, yes, Goop sell the hunks of scented wax for $75 apiece. Celebrities are hip to the trend and are cashing in on the market for bougie bougie parfumée.

Country star Kacey Musgraves just announced a candle collab with indie scent maker Boy Smells. The scented candle, called “Slow Burn” after the opening track of her fourth album, was inspired by a sunset, which sounds cozy as heck. "In my mind, it's in the summer, I'm on my porch in Nashville. I was having a drink, and I was thinking about strangers on the other side of the globe, waking up and doing their thing as the sun had just gone down," Musgraves told Allure. She said she also vaguely remembers smelling a bonfire, and “Slow Burn” is a smoky yet summery combo of incense, raspberry, and black pepper.

Tons of other stars have released candles in the past: Kim Kardashian, queen of these things, recently announced she’d be selling one scented like her Crystal Gardenia perfume. "I always have so many candles around my home and having a scent that illuminates the room makes me feel so good," she tweeted promoting the candle. Tattoo artist and beauty mogul Kat Von D released her “Saint and Sinner” candle collection last year.

Heck, back in 2006, Elton John teamed up with Bath and Body Works on a line of candles inspired by the musician’s country estate in England. (Ten percent of proceeds went to the Elton John AIDS Foundation.) “He has a passion for candles. He is my kind of guy,” a Bath and Body Works executive said at the time.