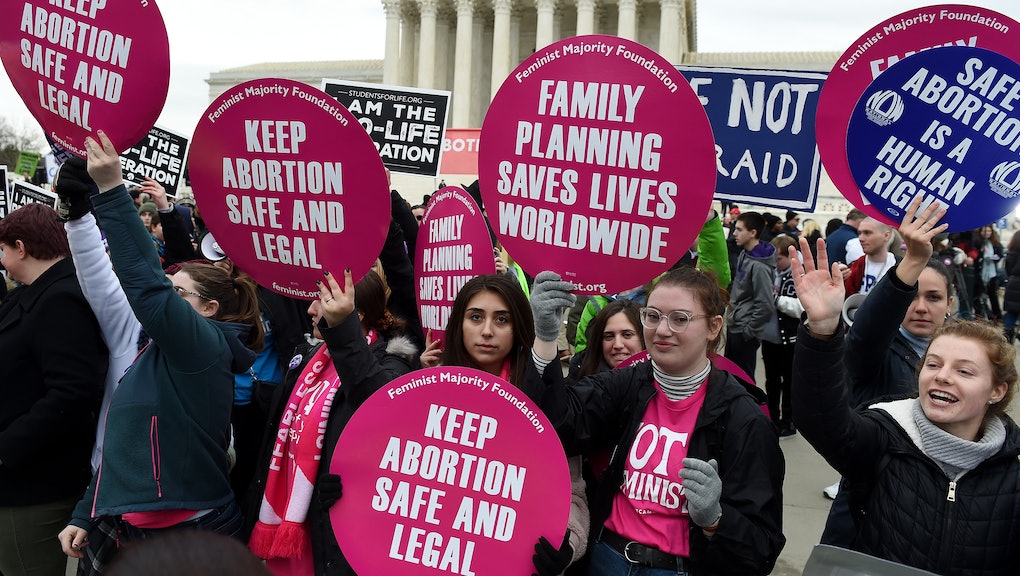 On Wednesday, March 4, the Supreme Court of the United States will hear oral arguments in the case of June Medical Services v. Russo. What's the catch? The nine justices have heard the arguments before.

The June case centers around a Louisiana law that mandates that abortion providers have admitting privileges at a nearby hospital. The 2016 case of Whole Woman's Health v. Hellerstedt challenged a Texas law similar to Louisiana's; in fact, the language of the two pieces of legislation isn't just similar, but rather the bills are virtually mirror images of each other. The question at hand is whether an abortion provider needs to have admitting privileges to a nearby hospital. The stipulation greatly reduces access to abortion by adding legal hurdles to the procedure, and there's no medical basis for it; it's effect is mostly to shutter clinics and make it more difficult for patients to access abortion care.

In 2016, the Supreme Court ruled that the Texas law posed an undue burden to patients seeking abortion care, and abortion advocates are hoping that the Justices come to the same conclusion in June Medical Services v. Russo. That's what the Creative Council of the Center for Reproductive Rights, which will be arguing the case, wants you to know.

The legal advocacy organization released a star-studded video Friday emphasizing that the Supreme Court has already essentially ruled on June, in an effort to draw attention to the high-stakes case — especially if the now conservative-leaning bench goes the other way this time. Creative Council board members including Busy Phillips, Aja Naomi King, and Adam Scott take turns explaining in the video why the pending court case is so important.

In the video, members of the Creative Council say, "Louisiana lawmakers are trying to deny women their rights. They can’t defeat Roe lawfully. So they’re doing their damnedest to block access to abortion care by fighting tooth and nail to defend this deceptive law that they know is medically unnecessary and unconstitutional."

In a press release, Nancy Northup, president and CEO of the Center for Reproductive Rights, explained the stakes like this: "We're also fighting to protect the integrity of the Court from politicians who ignore legal precedent and disregard the facts. The Center is grateful to these artists and creatives for using their voices and platforms to make sure Americans know the facts about abortion rights."

If the Louisiana law is upheld, the Center for Reproductive Rights notes, the state would only have one clinic to service its 1 million patients of reproductive age.

More like this
Vaccines are good. Threatening to evict someone over them is not
By Rafi Schwartz
Of course Amy Coney Barrett claimed SCOTUS isn't partisan
By Rafi Schwartz
I never want Tucker Carlson to stop talking about Nicki Minaj's cousin's friend's enormous balls
By Rafi Schwartz
Stay up to date