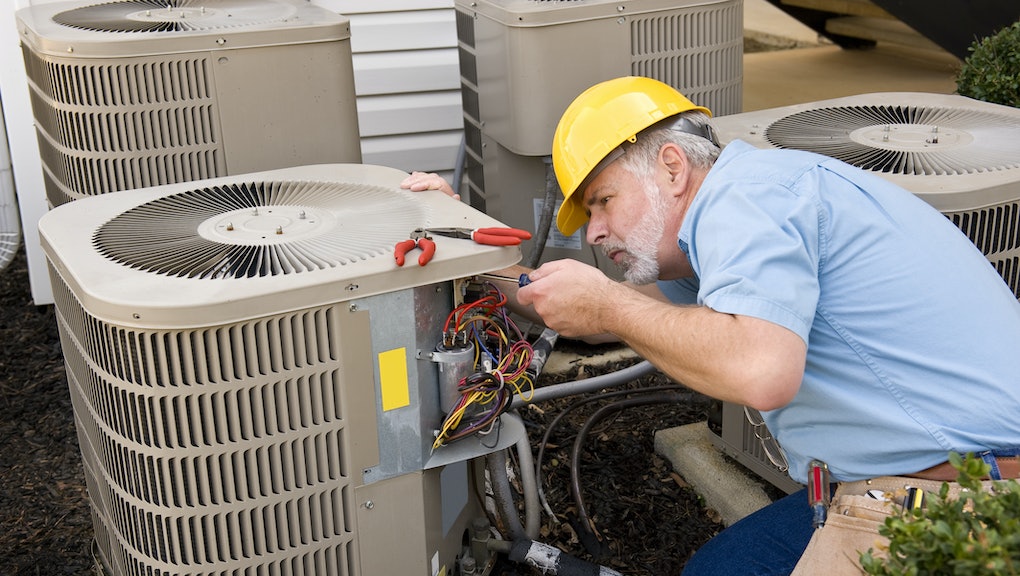 CFCs contributed to one-third of the rise in Earth's temperature between 1955 and 2005, new study reports

Between 1955 and 2005, while people around the world were cooling their homes they were also heating the planet. A study published in Nature Climate Change this week found that for half a century, our refrigerators and air conditioners pumped harmful chemicals into the atmosphere that managed to tear a hole in the ozone layer. The result of the five decades of pollution is to blame for as much as one-third of the rise in the planet's temperature during that period, the study reports.

At the center of the issue that plagued the back half of the 20th century were substances like chlorofluorocarbons and hydrochlorofluorocarbons, (which you may have heard of more commonly referred to as "CFCs") both used as refrigerants in household appliances. In the 50 years following the introduction of those chemicals as cooling options, researchers found that the global temperature increased by about 1.1 degrees Fahrenheit. Using modeling techniques, the scientists re-ran the numbers to find out what would have happened if we immediately recognized the threat of those substances and avoided using them so liberally. They found that, under such a scenario, the Earth would have experienced a temperature rise of 0.7 degrees Fahrenheit — about one-third as much as actually took place.

The effects were particularly felt in the Arctic, which saw a 2.9 degree Fahrenheit rise in its average temperature as a result of these chemicals cutting a hole in the ozone layer. Had it not been for those carbon substances being spewed into the atmosphere, the Arctic would have seen a 1.4 degree Fahrenheit increase in temperature. That is still an unfortunate level of warming, but still limited enough that we wouldn't have seen nearly the amount of ice losses in the region. Researchers believe that that the substances from our cooling systems can be blamed for about half of the loss of sea ice over the course of that 50 year window.

The appeal of using chemicals like CFCs, particularly back in the 1950s, is easy to understand if you completely ignore what we know now. They are nontoxic, nonflammable chemicals and are relatively cheap to produce. Prior to their adoption, cooling systems like refrigerators relied on toxic gases like ammonia, methyl chloride, and sulfur dioxide to preserve the cold temperatures required — but a series of fatal accidents made it clear that those options were not viable. Frigidaire, General Motors and Du Pont set out to find a safer alternative and by 1928, they found chlorofluorocarbons. They were quickly put to use and were suddenly the primary cooling source in millions of fridges and air conditioning systems across the United States over the course of the next few decades. But refrigerants weren't the only sector that started to use these chemicals; they also were put to use in the manufacturing process of aerosol sprays, foams and packing materials, styrofoam, solvents and other goods.

It wasn't until 1985 when scientists discovered that while CFCs are harmless for use in the lower atmosphere, they do quite a bit of damage once they reach the stratosphere. As it turned out, the chemicals that many were counting on to keep them cool were responsible for chipping away at the ozone layer — a region of the stratosphere that absorbs ultraviolet radiation from the Sun and does the essential work of protecting us from harmful wavelengths. When chlorofluorocarbons float up toward the stratosphere, they get broken up by the sun's radiation. When that happens, there is a release of chlorine atoms that occurs. Those little atoms damage ozone molecules. Do too much damage to that layer, as we managed to do with all of the chlorofluorocarbons we were releasing over the course of the late 21st century, and it cannot regenerate fast enough and you end up with a hole in the ozone. That causes an increasingly warmer planet, which would necessitate more cooling — which releases the chemicals that put us in the predicament to begin with. It would become a vicious cycle.

Luckily, shortly after it was discovered that chlorofluorocarbons were the cause for the damage to the ozone, there was a movement to phase out the substances. In 1987, 46 nations came together to create the Montreal Protocol on Substances that Deplete the Ozone Layer — an international agreement to stop relying on the chemicals that are destroying the essential layer protecting the planet. The agreement included a required significant reduction in the use of chlorofluorocarbons and similar chemicals, and since its introduction has reached 197 signatories and added several amendments when necessary to address chemicals discovered to damage the ozone. By basically all accounts, the Montreal Protocol was a complete success in what it set out to accomplish. Every developing country that signed on to the agreement achieved a 100 percent phase out of CFCs by 2010. In 2018, the United Nations projected that because of the agreement, the hole in the ozone layer is actually projected to heal up, returning to 1980 levels of health by sometime between 2045 and 2060.

That is all good news, particularly considering the damage that chlorofluorocarbons did to the environment, but we aren't in the clear yet. While India and China have both reported to having eliminated chlorofluorocarbons in 2017, a new study found that the countries were actually seeing significant increases in releases of the chemicals over the last few years, driven largely by the same cooling products that caused this problem in the first place — air conditioners and refrigerators. These findings are not the first instance that suggests China has not been as forthright in its elimination of these chemicals as the country has suggested. In 2018, a sudden rise in the presence of chlorofluorocarbons was identified by scientists and eventually linked the rogue release of chemicals to China. The latest study suggests that not only has the country failed to address this unfortunate rise, but has actually allowed the problem to get worse, once again putting our ozone at risk. International agreements like the Montreal Protocol — or, more recently, the Paris Climate Agreement — require participation from all parties in order to be successful. When one country decides to skirt the rules or back out entirely, it risks undermining any gains that agreement was responsible for. Protecting the ozone and addressing climate change is an international issue — all countries share responsibility for addressing it, just as all countries will eventually be affected by the results of inaction. Cheating on these agreements is easy enough and might provide some short-term benefits, but there is little point to those momentary conveniences if the end result is chipping away at the overall health of the planet.