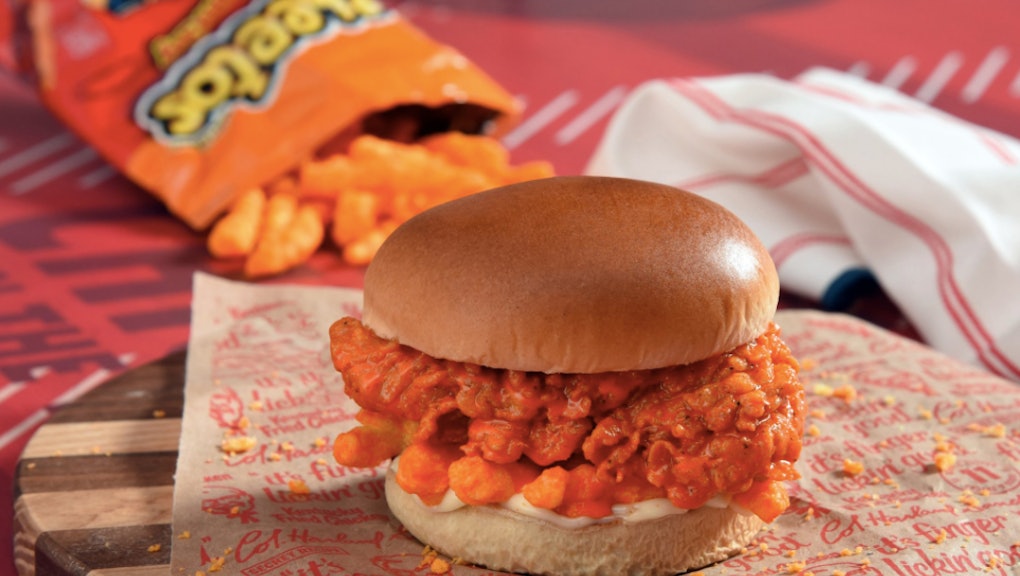 Cheetos and KFC's new chicken sandwich is the ungodly, possibly delicious collab of the summer

Colonel Sanders and Chester Cheetah have teamed up for the junk food collaboration of the summer. A KFC Cheetos chicken sandwich is hitting KFC's menus this July, and it's being promoted as the "sandwich of your dreams" (or nightmares, depending on your taste). The limited-edition meal will feature KFC's hand-breaded extra crispy chicken fillet with special Cheetos-infused sauce, layered on a toasted bun with crunchy Cheetos and mayo. Calorie information and nutritional facts have yet to be released, but you can assume that this sandwich is... a lot.

The two brands' collaboration was first teased earlier this year, when KFC tested the special menu item in select restaurants in North Carolina, Virginia and Georgia. However, July 1 marks the first time the cheesy sandwich will be available nationwide, and you won't want to miss out, as it'll only be listed on KFC's menus for four weeks.

To celebrate the new, limited edition menu item, KFC and Cheetos will be hosting a free pop-up party in New York City on Thursday, June 27, between 4 p.m. and 8 p.m. Host Chester Cheetah will welcome guests with additional collaborative items like KFC hot wings dipped in Cheetos sauce and sprinkled with Cheetos dust, Cheetos-loaded fries with a three-cheese blend and bacon pits, and a KFC mac and Cheetos bowl, topped with popcorn chicken and tons of Cheetos flavor. Guests can RSVP online for access.

Naturally, the brands' decision to team up is getting plenty of attention, but it's not the first time either company has introduced an eyebrow-raising new item or idea. Back in 2017, Cheetos opened a pop-up restaurant, The Spotted Cheetah, in Manhattan, with a subsequent Flamin' Hot Cheetos pop-up arriving in Los Angeles a year later. Last summer, Cheetos partnered with Krispy Kreme in South Korea to produce Cheetos-flavored doughnut holes. And just recently , the brand unleashed a collection of Flamin' Hot Cheetos apparel along with Forever 21, so fans of the spicy cheese snack can head to the beach in a Chester Cheetah adorned one-piece or tube top, if they wish.

KFC's product stunts, meanwhile, have ranged from a capsule collection of apparel with Human Made to hype-worthy sneaker drops to gravy-scented candles to fried chicken scented fire logs to a robocop employed to protect the top secret recipe. Clearly, "low key" isn't in either KFC nor Cheetos' vocabularies.

But why should it be, when so many customers, especially Instagram-loving Millennials, are drawn to wild-sounding items and exciting "experiences" from brands? More and more fast food companies, in particular, are hunting for new ways to lure in consumers (take Taco Bell's Palm Springs upcoming pop-up hotel as an example), and it's working; stunts like these are typically cheap, accessible, and memorable, efficiently seducing the attention of trend-seeking fast food lovers. The purpose of a menu item like the KFC Cheetos Chicken Sandwich isn't necessarily to provide the best taste or the best value, but to create an experience worth posting about and sharing with your friends. And hey, if it happens to be delicious, that never hurts.

More like this
What is sploshing, the food fetish that's taking over TikTok?
By Melissa Pandika
An anti-vaxxer decided to come to work in blackface, comparing her "plight" to that of Rosa Parks
By Melissa Pandika
Uncontrollable, weed-induced vomiting is on the rise, according to new research
By Tracey Anne Duncan
Stay up to date