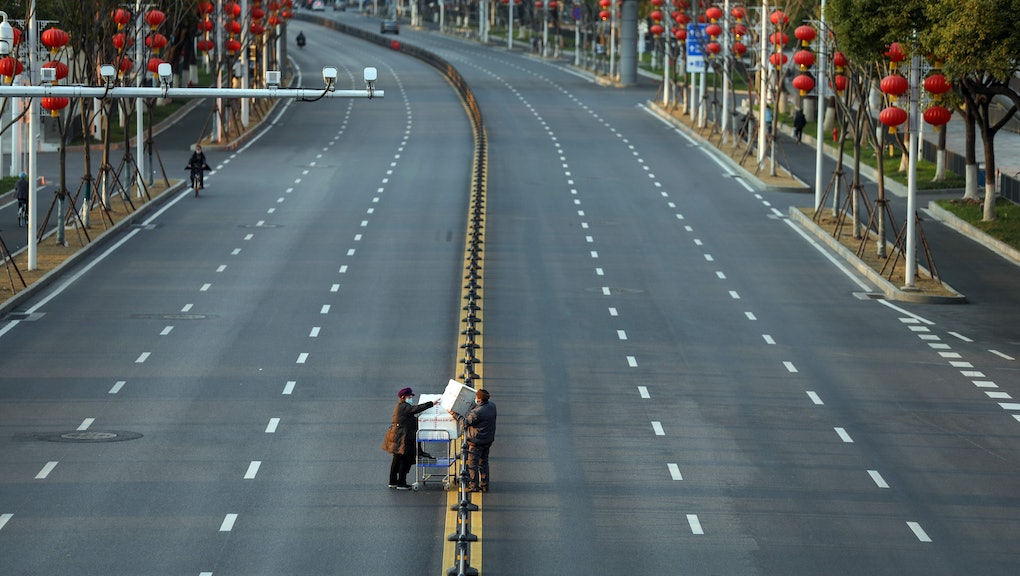 In today's 'news that gives you mixed emotions' comes a report showing that China's carbon emissions have dropped by about 100 million metric tons over the past two weeks. This amounts to nearly six percent of all global emissions produced in 2019 and approximately a quarter or more of China's typical CO2 emissions produced around this time of year. It's a big feat for a country considered the biggest consumer of fossil fuels. But, unfortunately, the news isn't something for the environmentally conscious to celebrate.

Not when the drop in emissions is due to the coronavirus (COVID-19) outbreak.

The coronavirus, officially called COVID-19, is a highly contagious virus that has spread throughout China and other countries. At this time, there are approximately 75,781 coronavirus cases known throughout the world. About 2,130 people have died from the disease, and 16,917 people have reportedly recovered from it. Analysts have estimated that these numbers could actually be higher, given the evidence that the Chinese government has tried to hide the number of infections by silencing healthcare workers.

A study by researchers from the Centre for Research on Energy and Clean Air (CREA) in Finland has found that the factory and production plant shutdowns in China have slowed down the carbon emissions rate for these key industries. Around this time of year, after the Lunar New Year, industries usually ramp up with activity after the holidays. Since the government has extended the holidays and encouraged people to stay home to avoid the virus, industrial activity has come to a crawl.

CREA took the rate of carbon emissions from many locations in China and compared them to previous records. In places like Qinhuangdao, a city that's considered the "main coal port," the number of emissions have fallen to all-time lows during the past 14 days. The number of domestic flights in China have also dropped by a whopping 60-70 percent, which was also included in the study. "Taken together," wrote Lauri Myllyvirta, an analyst at CREA, "the reductions in coal and crude oil use indicate a reduction in CO2 emissions of 25% or more[.]"

But the lowered rate, the analysts warned, is only temporary. China is no stranger to week-long shutdowns, and many industries make up for the lack of production by ramping up activity right after a pause. It wouldn't take long for the country to bring the numbers back up to the usual.

"China also has very substantial overcapacity in all of the major CO2-emitting industries," CREA reported, "meaning production volumes — and emissions — can catch up rapidly after a shutdown, if the demand is there." The only true way for China to ensure long-term reduction in carbon emissions is by reducing the demand for fossil fuels.

Li Shuo, policy adviser for Greenpeace China, seemed to agree in a comment to Science Alert. "After the coronavirus calms down, it is quite likely we will observe a round of so-called 'retaliatory pollutions' — factories maximizing production to compensate for their losses during the shutdown period," he said. "This is a tested and proven pattern."

However, the research team noted that the effects of the production slowdowns could be extended depending on the continued response to the outbreak. An example would be if workers continued to go unpaid due to the lack of revenue from businesses. If there's no money to go around, the demand for products and fossil fuels could remain low, which would prevent these industries from recovering back to previous levels. Businesses have also remained closed despite Chairman Xi's recommendations to reopen and get the economy moving again, CREA observed. Citizens have been restricted or too afraid to move around. New construction projects could slow down or halt.

"If financial distress results in disruption to operations, the [reduction in carbon emissions] could be more profound and sustained," wrote Myllyvirta.

But that might not be the best news to hear for the people who have to struggle with both a virus and their lowered finances.

More like this
Texas officials responded to the winter storm with propaganda they got from a pro-fossil fuel think tank
By AJ Dellinger
Biden's American Jobs Plan throws $2 trillion at America's crumbling infrastructure
By AJ Dellinger
The ocean is about to swallow a climate research facility, which feels fitting
By AJ Dellinger
Stay up to date