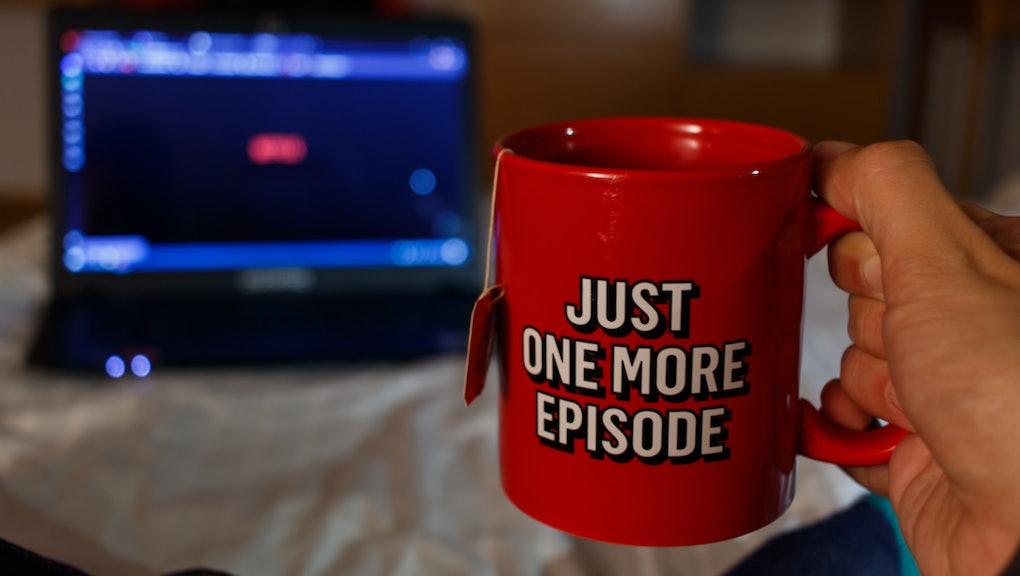 We've all been there. How many times have you been sitting at work, scrolling through endless Reddit threads or mindlessly browsing Twitter, waiting for the workday to end? It's difficult to disguise those sites if you're trying to avoid getting caught. But it's even more difficult to hide your favorite streaming service if you're bold enough to take it even further and watch Stranger Things at work. That's where Chrome extension Netflix Hangouts comes in.

It's a new Chrome extension that you can add to your browser with a few clicks, The Verge reports. After you've installed it, all you have to do is log into your Netflix account (or your friend's, if you happen to be sharing) and click the extension's icon in your Chrome taskbar. Instantly, your screen will be transformed into a four-person conference call. You'll be "chatting" with three other coworkers while you enjoy your favorite Netflix series on the down-low. Sneaky, right?

To the untrained eye, it'll look like you're simply being super productive, lost in conversation with your colleagues who appear to be super into everything you're saying. But for anyone who looks a little closer, they'll see the Netflix show of your choice in the bottom right of the screen. To turn it off, or when the coast is clear, just click the same extension toggle button again and your four-way conversation will come to a swift end, leaving no one but you and the Hawkins, Indiana kids or the folks at Dunder-Mifflin. Easy enough, right?

This is all the ingenious work of Mschf Internet Studios, the same creator responsible for the virtual pet app Tabagotchi, an online pet that inches closer to death the more tabs you currently have open. Mschf is no stranger to creating intriguing projects, and people have been trying to hide their online slack-off times for years. Just look at this extension that transforms Reddit into Outlook and Twitter into Slack. These are all convincing...if no one looks too closely at your screen, anyway.

Credit definitely has to be given to those who lent their likenesses to the fake Hangouts video loops, which are quite convincing if you're only glancing briefly at your employee's computer. Wonder what kind of conversation they're having? And if you're pretending to be on a call, shouldn't you be occasionally speaking to your screen and your imaginary coworkers as well? If you're going to work this complicated ruse, better do it right and make sure you're wearing a headset at the very least.

Now, in no way are we endorsing slacking on the job or getting paid to binge-watch Glow. But this is a fairly cool overlay on its own — it doesn't have to include getting one over on your bosses so you can kick back and watch TV. It's certainly a fun surprise to to pull out from time to time, though. Ah, the lengths we'll go to in order to catch up on our favorite shows, right? At least this way you'll avoid spoilers from your coworkers.