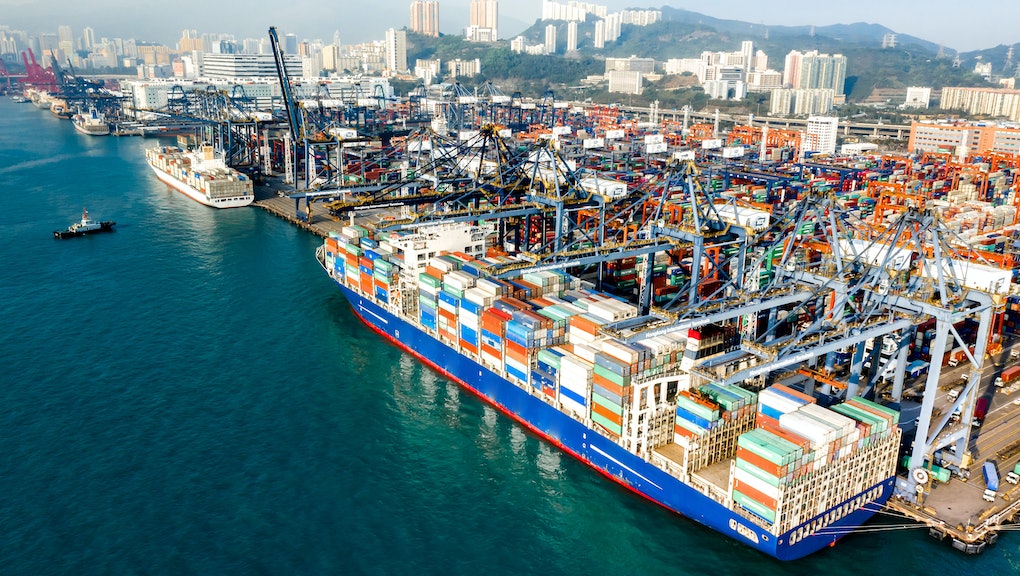 The fossil fuel industry holds a significant share of the burden when it comes to climate change, but it isn't alone. Big businesses, particularly international conglomerates that ship products all over the world and burn oil and coal along the way, have done their share of damage to the planet as well, all in the name of profit. Now, it's that same motivation — the bottom line — that has those corporations trying to go green, as they are worried that the effects of climate change may end up costing them money in the long run.

Over the last year or so, the realization that climate change will interfere with business-as-usual operations has started to hit home for corporations. According to the New York Times, risks associated with climate change and a warming planet have started to make their way into disclosures provided to shareholders. This follows a number of studies highlighting the risks that await businesses in the coming years as the planet continues to warm. With the risk of infrastructure being destroyed, millions of people being displaced, and the supply chain of businesses being interrupted, research suggests there's a very real chance that businesses will start to feel the pain of climate change in their bottom line, to the tune of trillions of dollars lost. That's enough to get the attention of the executive suite and finally make some changes — if not for fear of destroying the planet, then for fear of losing out on some of that money.

This marks a significant change from how corporations had previously approached the looming threat of climate change. A study published in the journal Nature Climate Change examined more than 1,600 corporate adaptation strategies and documents provided to shareholders. It found that the vast majority of corporations significantly downplay the potential effects of climate change. Researchers examining the document found that companies reported an aggregated risk in the tens of billions when expert projections place the figure well into the trillions. Researchers chalked the discrepancy up to the fact that many companies simply don't report the potential financial risks that climate change presents, while others are actively underestimating them.

Attitudes of these corporations have been changing, though. According to Quartz, more businesses have started to recognize that climate change will effect their business. In 2011, just 34 percent of corporations acknowledged that climate-related risks are "more likely than not" or "virtually certain." That figure climbed to 50 percent in 2013 and jumped to just over two-thirds of all companies in 2016. Similarly, CDP Global — a United Kingdom-based environmental risk assessment firm — found that 72 percent of companies now integrate climate-related risks into their business strategy (though American companies still lag behind the curve, with 65 percent of companies based in the U.S. accounting for climate change). Larry Fink, the CEO of global investment firm BlackRock, warned his investors in his annual letter sent out earlier this week that "Climate change has become a defining factor in companies’ long-term prospects,” though he said, perhaps more optimistically, that "awareness is rapidly changing, and I believe we are on the edge of a fundamental reshaping of finance.”

With profits at risk, companies are finally paying attention

That is likely because the threat posed by climate change is becoming more imminent, and corporations are starting to scramble to figure out how to either preserve their bottom line or adjust expectations of share holders so the company value doesn't tank when its operations are disrupted by a major weather event. Instances of this have already happened, and it has caught companies entirely by surprise. El Pollo Loco, a popular food company with nearly 500 locations across the United States, saw its stock tumble because of weather conditions in California making it harder for customers to make their way to the restaurants. In Asia, people are starting to migrate away from coastal cities in preparation for rising tides and other extreme weather events that can devastate the areas. That has resulted in companies across the region taking a hit to their bottom line as they shift operations inland and try to account for the changing shape of land and shifting populations. A report published by S&P Global Ratings in 2018 found that 15 percent of S&P 500 companies — the 500 largest companies listed on stock exchanges in the US — have already suffered noteworthy losses due to weather events.

This is only likely to get worse. The operations of many businesses are a global endeavor, with different parts of supply chains located all over the world. According to the United Nations' Global Compact, about 80 percent of all trade is embedded into international supply chains. CDP Global research found that 76 percent of suppliers have identified climate change as a risk to their operations and could disrupt their business. Even a small disturbance could lead to major losses, not just for regions directly affected by the weather event, but for businesses and individuals around the world who will lose access to goods, services, and income. Take the severe flooding that plagued Thailand in 2011. As rain hit the nation, suppliers that operate out of Thailand were cut off from the rest of the world. It left more than 14,500 companies that count on those suppliers without goods and they incurred losses of between $15 and $20 billion worldwide and resulted in at least 10,000 jobs lost.

Companies are turning over a new, green leaf

Luckily, businesses are finally starting to actively recognize the risk in front of them — even if the wake-up call required a threat to their bottom line. When business leaders gathered for the World Economic Forum (WEF) in Davos, Switzerland last year, the topic at the forefront of their collective mind was climate change. According to a survey of business leaders and experts in attendance, extreme weather, migration caused by climate change, and natural disasters topped the list of risks that companies will face going forward. Similarly, the World Economic Forum recently noted in a report that climate resilience will play a major role for companies going forward, and more businesses are taking the approach of becoming more sustainable in order to steel themselves against climate-related impacts to their supply chain and operations. Corporations like Nestlé, one of the biggest food companies in the world, are investing billions into attempts to reduce plastic consumption and improve recycling programs. Unilever, another massive consumer goods maker, has promised to operate entirely on renewable energy by 2030, and more than 20 multinational corporations have promised the United Nations that they will commit to ditching fossil fuel for renewable over the course of the next decade.

These actions may be viewed as coming too late in the game — an effort by these corporations to save their own asses from extinction by way of tanking stock value and shrinking revenue. It certainly shouldn't be forgotten that many of the corporations now committing to going green are the same ones who are largely responsible for the massive amount of greenhouse gas emissions that fuel human-caused climate change and have raised the temperature of the planet to a point that we are experiencing increased extreme weather events. Their actions in the past are in part the reason that they face climate-related threats to their operations now and in the future.

And it's impossible to ignore the fact that there is profit motive in going green, too. Not only will it potentially preserve their supply chains and profits, but there is also money to be made in addressing climate change — CDP Global suggests that there is about $2.1 trillion in climate-related business opportunities. But the outcome here is mostly a favorable one for humanity. It is great for individuals to cut back on their carbon footprint and try to limit their amount of emissions, but it is largely corporations who are responsible for those emissions and it should largely be their responsibility to fix things — even if the thing motivating them to do so is still money.

More like this
Amid daily reports of catastrophe, Americans are finally starting to realize climate change is bad
By AJ Dellinger
Plastic Free July is the perfect opportunity to kick our pandemic habits
By AJ Dellinger
Bernie Sanders simply does not care about your archaic Senate rules
By AJ Dellinger
Stay up to date