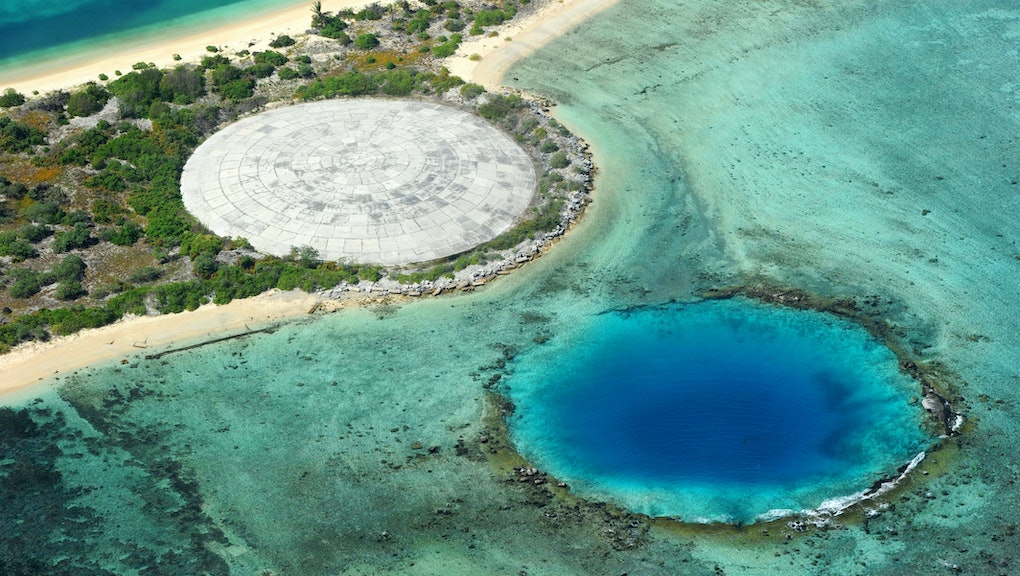 Climate change is collapsing the U.S.'s nuclear waste tomb in the Marshall Islands

Ask people to think of a nuclear disaster and they'll probably come back with the name Chernobyl. The 1986 explosion of a Soviet Union reactor that resulted in the immediate death of at least 50 people has cemented itself in modern memory, but there's another disaster building. In the Marshall Islands, climate change is collapsing a nuclear tomb, and the United States is the one who put it there.

Between 1946 and 1958, the United States conducted 67 nuclear tests in the Marshall Islands, which is a collection of 29 coral atolls across 1,156 islands. Of course, the U.S. didn't end with nuclear weapons. The Pentagon also dropped biological weapons on the islands.

When the U.S. was finished, it took all the waste from the islands, along with contaminated soil from a Nevada testing site, dumped it into the Runit Dome, a crater left from a nuclear detonation, and covered all of that with concrete.

Referred to as locals by "The Tomb", the site holds more than 3.1 million cubic feet of U.S.-produced radioactive soil and debris. That includes lethal amounts of plutonium. According to The Los Angeles Times, that amount is enough to fill 35 Olympic sized swimming pools.

Now, rising sea levels and temperatures have begun to crack open the dome. As that happens, plutonium is being dumped into the Pacific. And despite being the ones who put the nuclear waste there, the United States says it's the responsibility of Marshall Island officials to handle the fallout.

“I’m like, how can [the dome] be ours?” Hilda Heine, the president of the Republic of the Marshall Islands, told The Los Angeles Times. “We don’t want it. We didn’t build it. The garbage inside is not ours. It’s theirs.”

Last month, the Marshall Islands declared a national climate crisis. In a tweet, Heine wrote, "As one of only four low-lying coral atoll nations in the world, the failure of the international community to adequately respond to the global climate crisis of its own making holds particularly grave consequences."

When it began conducting tests on the islands, the United States was not honest with the Marshallese who lived there. In March 1954, the U.S. conducted its largest nuclear detonation ever, Castle Bravo, at Bikini Atoll. According to the Atomic Heritage Foundation, Bravo was over than 1,000 times more powerful than Little Boy, the atomic bomb that decimated Hiroshima.

The 167 people living on the island were relocated. The Atomic Heritage Foundation reported that Navy Commodore Ben Wyatt told them it was "for the good of mankind" and they were a chosen people. But, relocation didn't spare the Marshallese from dealing with nuclear fallout.

"Approximately five hours after detonation, it began to rain radioactive fallout at Rongelap. Within hours, the atoll was covered with a fine, white, powdered-like substance. No one knew it was radioactive fallout. (…) The children played in the snow. They ate it," Senator of the Marshall Islands Parliament, Jeton Anjain, said.

A Marshall Islands woman would later tell diplomats that, "It was only a matter of two or three years before women on the island started to give birth to things less than human." Vice reported that birth defects are so common on the islands that there's a number of words used locally to describe them.

For the Marshallese, the U.S.'s testing and the Runit Dome have always been a nuclear disaster, even if it doesn't gain the recognition of other ones. In July, Columbia University found that radiation in parts of the islands is higher than Chernobyl and Fukushima. But as climate change collapses the tomb, it brings attention once again to how smaller nations are facing disproportionate consequences for a climate crisis that they are not responsible for.