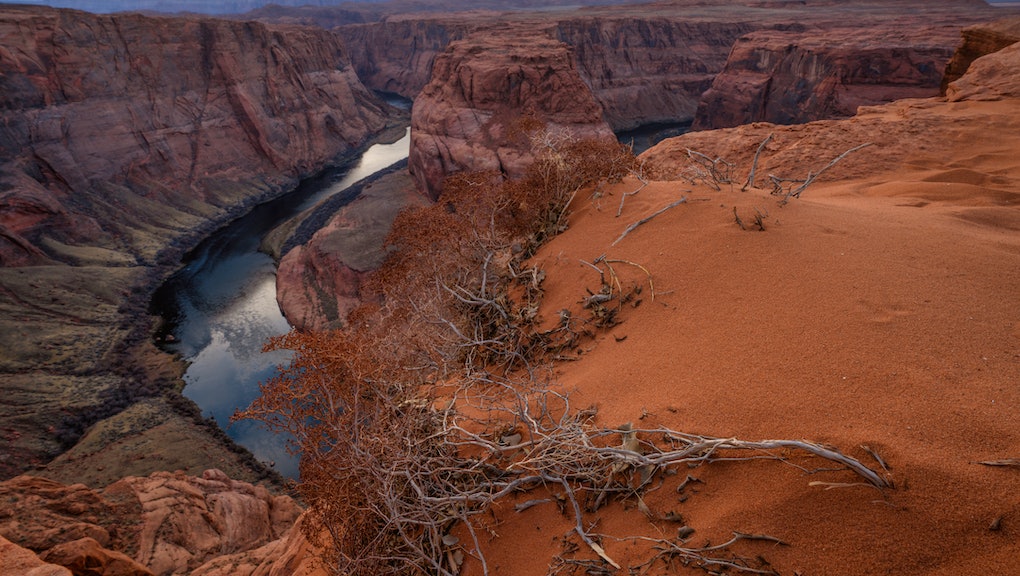 Climate change is starting to dry up the Colorado River

Despite its name, the Colorado River touches much more than just its namesake state. The 1,450-miles-long waterway stretches and winds through seven states in the United States and two more in Mexico. Its seemingly ubiquitous presence throughout the American Southwest and northern Mexico has made it an essential source of water for more than 40 million people, according to the University of Colorado's Western Water Assessment report. And now, thanks to climate change, the Colorado River is starting to run dry — running the risk of permanently changing the region and leaving millions without reliable access to water.

New research published this week in Science took a look at the Colorado River's dwindling water supply and found the primary culprit to be human-caused climate change. Specifically, because of a global rise in temperature related to greenhouse gas emissions, the Colorado River has become burdened with more water evaporation and fewer consistent sources to replenish its supply. According to researchers, hotter temperatures are resulting in less snow and ice during winter months — which would typically feed into the waterway. That replenishing process isn't happening with the same frequency that it once did. Add to that the fact that the temperature rise has forced the Colorado River to absorb more of the sun's energy, resulting in more water evaporation, and you're left with a water source that is rapidly running dry. Scientists warn that the Colorado River is likely to lose as much as 9.3 percent of its water for each degree Celsius temperature rise. Given that we are currently on track to experience a global temperature rise of as much as 4.1 degrees Celsius by 2100, the Colorado River could lose as much as 40 percent of its current water reserves by the end of this century.

The fallout from such an occurrence would be particularly devastating to much of the Southwest region of the country. The Colorado River feeds into Lake Powell, located between Utah and Arizona, and Lake Mead, which borders Arizona and Nevada — the two largest water reserves in the United States. Lake Mead alone provides the city of Las Vegas with nearly half of its entire water supply. But it's not just people in the region that rely on the water that flows through the Colorado River — the rest of the country counts on it, too. Water from the massive waterway irrigates about 15 percent of all agricultural products in the U.S., and helps to supply about 90 percent of all U.S.-grown winter vegetables. The river is a source of livelihood not just by providing an essential resource, but by providing jobs as well. It supports about $1.4 trillion in annual economic activity, according to The Nature Conservancy, and is responsible for supporting about 16 million jobs across California, Arizona, Nevada, Utah, Colorado, New Mexico, and Wyoming.

As the Colorado River continues to lose its water sources, those jobs and the goods that are created from it will start to evaporate as well — and that process is already underway. According to researchers at the University of Colorado, the river is already about 130 feet lower than it was as recently as 2000. That trend is expected to continue. Experts warn that the flow of the Colorado River is expected to decrease by between five and 20 percent over the next 40 years. The effects are already starting to manifest: according to The Guardian, Lake Mead has already dropped to levels that haven't been seen since the 1960s.

If these trends continue — and it likely will, as humans still struggle to make the changes necessary to curb carbon emissions and prevent the ongoing global temperature rise that results from climate change — the Southwest could experience a significant water crisis. Rationing may have to take place — an event that other nations have already struggled with as major water reserves begin to run dry.

Day Zero events — occurrences where water sources run completely dry — are encroaching across the world. Australia is staring down a massive water crisis as extreme heat and droughts continue to strike across the country. Cape Town, South Africa came within three months of a Day Zero event in 2018, and Sao Paulo, Brazil was just 20 days away running out of water in 2015. Scientists have warned that Day Zero looms for about one-quarter of the world, and the World Resources Institute estimates that as many as 255 million people currently live in cities that run the risk of experiencing a water crisis. If the Colorado River continues to lose water, Day Zero may come sooner than expected for much of the Southwest U.S. and northern Mexico.

More like this
Amid daily reports of catastrophe, Americans are finally starting to realize climate change is bad
By AJ Dellinger
Much of the American West is on fire. Again
By Vanessa Taylor
Death Valley set a new record-high temperature. But the daily lows are more concerning
By AJ Dellinger
Stay up to date