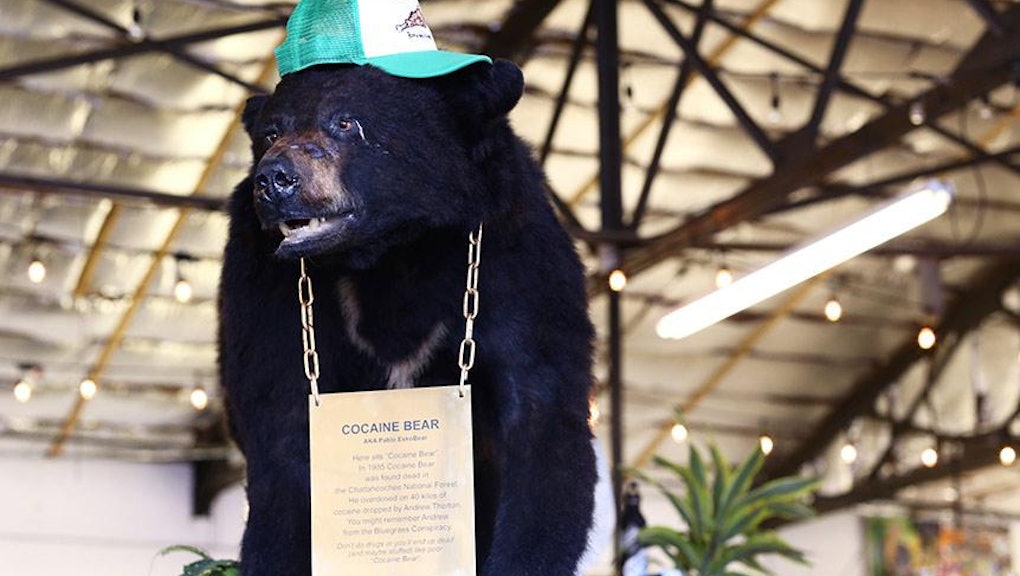 'Cocaine Bear' is the movie we didn't know we desperately needed

If an elevator pitch is good enough, two words are all you need. Cocaine bear? Cocaine bear! Sold. It might have taken a bit more to get this one across the finish line at Universal, but the movie is in fact happening. As The Hollywood Reporter notes, Elizabeth Banks has signed on to direct a film simply called Cocaine Bear, with Phil Lord and Chris Miller (21 Jump Street, The Lego Movie), onboard to produce.

You’d be forgiven for having some questions at this point. Does the bear do cocaine? Live-action or CGI? Paddington or no Paddington? How could this be based on a true story? Astonishingly: yes, live-action, sadly no Paddington, and it’s a wild world out there. Cocaine Bear takes its inspiration from a 1985 drug smuggling job, in which a duffle bag fell from a plane, and the titular 175-pound black bear encountered said bag, guzzling down its 70 pounds of cocaine, and dying. Here’s the original New York Times story, in its regrettably short entirety:

“A 175-pound black bear apparently died of an overdose of cocaine after discovering a batch of the drug, the Georgia Bureau of Investigation said today. The cocaine was apparently dropped from a plane piloted by Andrew Thornton, a convicted drug smuggler who died Sept. 11 in Knoxville, Tenn., because he was carrying too heavy a load while parachuting. The bureau said the bear was found Friday in northern Georgia among 40 opened plastic containers with traces of cocaine.”

The big guy’s become an object of Kentucky lore, given Thornton’s ties to Lexington and the bear’s tourism value in the afterlife. As the Lexington Herald Leader points out, “Cocaine Bear” a.k.a. “Pablo EskoBear” was preserved through taxidermy and acquired by the Lexington-based clothing shop Kentucky for Kentucky. Before the film, he also inspired commemorative mugs and a recent TV ad.

Details are scant on what Banks, Lord, and Miller have in mind thus far, but it sure is fun to fill in the blanks. The film’s being described as a character-driven thriller — ostensibly focused on Thornton and the smugglers as much as the bear — but with the involvement of Lord and Miller, you can imagine something a bit looser. Jason Isbell’s calling for John C. Reilly to voice cocaine bear, which feels right, but anything with an anthropomorphic approach — think Disney’s The Country Bears — is on the right track. Since Banks’s previous work as a feature-length director is limited to Pitch Perfect 2 and the recent Charlie’s Angels reboot, it certainly stands to be a delirious departure for her behind the camera.

More like this
Here's how scientists plan to create a less addictive opioid
By Aaron W. Harrison
Dua Lipa has officially distanced herself from DaBaby
By Kara Weisenstein
8 shows like 'Ted Lasso' to watch if you need more feel-good TV
By Brandon Yu
Stay up to date