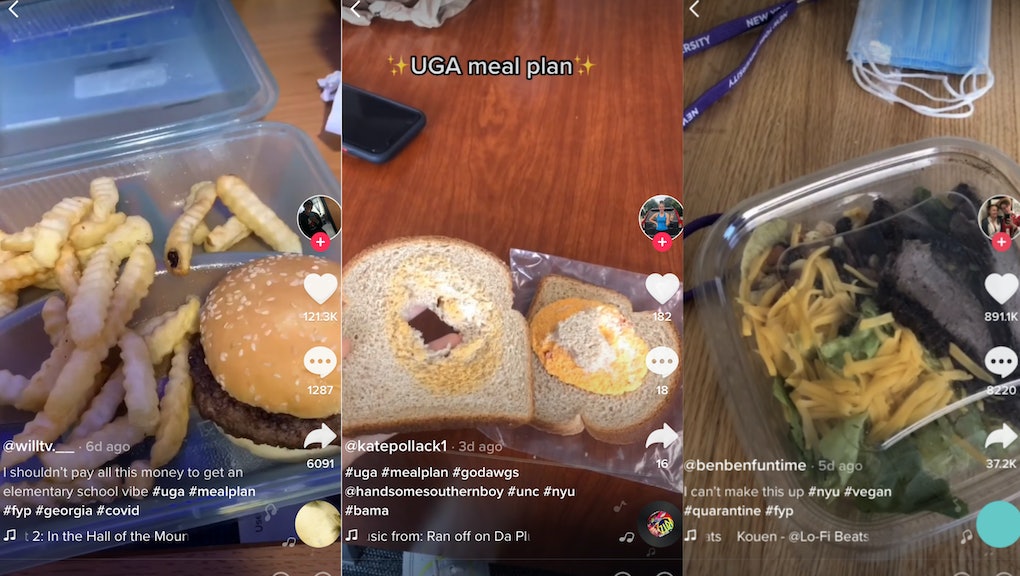 In their first days back to campus dorms, students across the country have shared their terrible quarantine meals on TikTok, from NYU to the University of Georgia. Over the past few months, the game plan for major universities became distressingly clear: send thousands of kids back to campus, where they’ll certainly be in close contact, go to parties, foster a petri dish for COVID-19, and then blame the students for being undisciplined. However, schools welcoming students who pay upwards of $60,000 a year to gross looking boxed meals and watermelon chicken salads was definitely a surprise.

Despite having the entire summer to prepare, Universities still seem to have no coherent plan for in-person schooling. UNC’s The Daily Tar Heel correctly identified this as a “clusterfuck,” just as an outbreak emerged on campus. The school would abruptly call off in-person classes for the fall soon after the editorial was published. On Monday, the University of Alabama reported 531 total cases, less than a week after students returned to campus. With thousands of students arriving from dozens of states, the possibility for transmission is drastically increased, so some of the more diligent schools are offering free meal delivery to students’ rooms. The thinking goes: drop meals off right at the dorms to keep kids quarantined in the early weeks, even if the food seems inedible.

For NYU, these deliveries immediately went south. Students documented their boxed lunch horrors on TikTok, which looked uniformly terrible if they even arrived at all. Some kids received all three meals together at 6:00 p.m.; others came on time, but in the form of cereal and warm orange juice, vegan salads complete with steak, and wet bags that appear to be reused.

“College Students Are Sharing Fyre Fest–Like Meals In Quarantine While Some Say They're Not Even Getting Them,” read the Buzzfeed headline about NYU’s rocky start to quarantine meals. These college freshmen bring more levity to the ordeal than the horrified influencers and rich weirdos who were met with FEMA tents and cheese sandwiches at Fyre Festival, but there’s no fun schadenfreude in any of this. It’s nothing more than kids getting fed through the meat grinder in the spirit of robust university profits.

Last week, NYU spokesman John Beckman apologized to students for the ugly meals, pinning a share of the blame on food vendor Chartwells in a statement to Mashable:

“We are aware of the students' complaints, which are valid. This is a never-before-tried operation for us and our food vendor, Chartwells...But it is vital to get it right, and we are disappointed in Chartwells' management of the quarantine meals process.”

The University of Georgia faced similar dining blowback, but for meals students had to get for themselves from the dining hall. A number of TikToks showed long lines snaking through the hall, only for them to receive burger and salad scraps for the full price of their meal plan. Some burgers were missing meat, some sandwiches were missing chunks of bread, and none of it looked particularly appetizing.

Over at the University of Iowa, administration faced heavy criticism for the same kind of spotty quarantine meal delivery. One student told Iowa Public Radio that meals were “inconsistent,” and said the school failed to deliver one to him and a neighbor. Another student detailed a slightly more harrowing experience quarantining in a dirty, unprepared room after testing positive for COVID-19 and receiving minimal communication from the school once she first experienced symptoms.

Absent a coherent federal leadership plan, nearly every American institution that’s tried to resume business as usual during the pandemic has floundered immensely. Colleges aren’t lending regular students the same level of resources as professional athletes in the bubble — or even college athletes whose conferences are moving forward with the season — so this bedlam is expected. While it’s hard to imagine how any school could resume in-person courses while keeping the case count low, you can be certain that we’ll find out about every new speed bump on TikTok.

More like this
March Madness might be over, but the fight for gender justice continues
By Lindsey Darvin, Anita M. Moorman and Ann Pegoraro
Want to study cannabis chemistry? This Michigan university is now offering a scholarship
By Melissa Pandika
An ode to quarantine meals that got us through the pandemic
By Melissa Pandika
Stay up to date