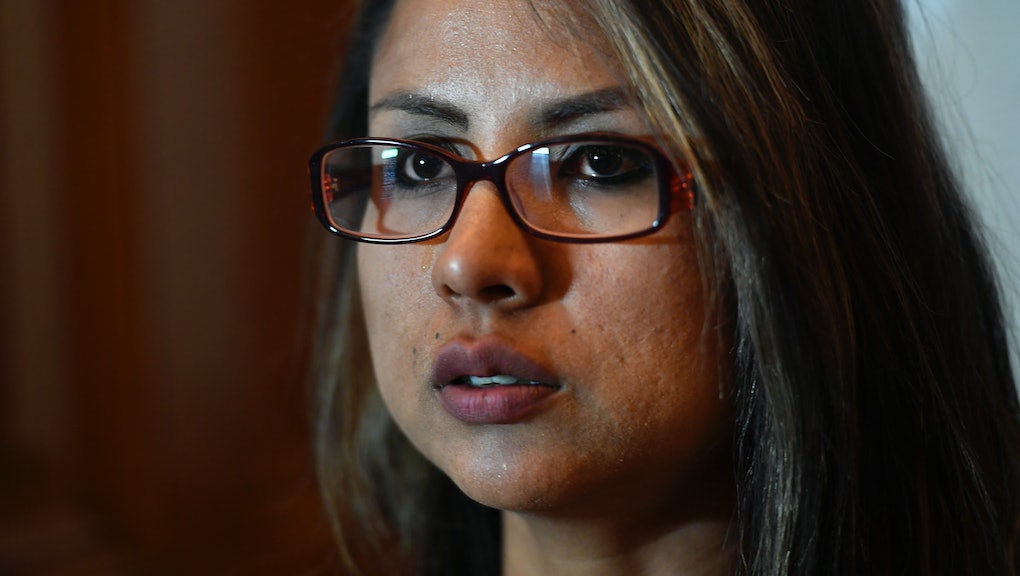 Colorado Gov. Jared Polis pardoned Ingrid Encalada LaTorre, a Peruvian woman who has been living in various churches for years to avoid deportation.

Polis pardoned Encalada LaTorre and four other people on Monday, according to The Colorado Sun. Encalada LaTorre came to the United States from Peru when she was 17 years old. In 2010, she was convicted of felony impersonation for using a stolen social security number to get a job at an assisted living facility, per CNN. Her lawyer convinced her to plead guilty to avoid jail time and she paid $12,000 in back taxes. However, the conviction meant she was prioritized for deportation.

“Since your conviction, you completed your probation and paid restitution and back taxes,” Polis wrote in a letter to Encalada LaTorre. “You are a dedicated and caring mother to your three children. You are working to educate others on legal ways to obtain employment and the consequences of using false documents.”

Polis’ decision won’t affect Encalada LaTorre’s immigration status but it will make be easier for the mother-of-three to establish legal residency in the United States. She has claimed sanctuary in various churches to avoid deportation since 2016.

In 2017, a judge denied an appeal to overturn her conviction and former Gov. John Hickenlooper refused to pardon her.

“The crime that Ms. Encalada LaTorre committed was not victimless,” Hickenlooper said at the time. He also argued the pardon would be “a step backward in the fight for smart, compassionate, and comprehensive immigration reform.”

Encalada LaTorre currently resides in the Unitarian Universalist Church of Boulder and plans to remain there until she gets her immigration status secured, reports KDVR.

“I want to get all my t’s crossed and m i’s dotted and make sure that I follow the process correctly,” she said during a press conference on Monday afternoon.

She hopes for a life most Americans take for granted.

“To be free, to have my resident card, to have a normal life — which is really everything that I’ve been wanting and hoping for,” Encalada LaTorre said. “And I really think this is going to open more doors for me.”

More like this
Biden has hit his 100th day in office. So what's next?
By Rafi Schwartz
Caitlyn Jenner's campaign is off to a great start!
By Rafi Schwartz
Texts from Matt Gaetz's "wingman" allege that the congressman paid for sex with a 17-year-old
By Rafi Schwartz
Stay up to date