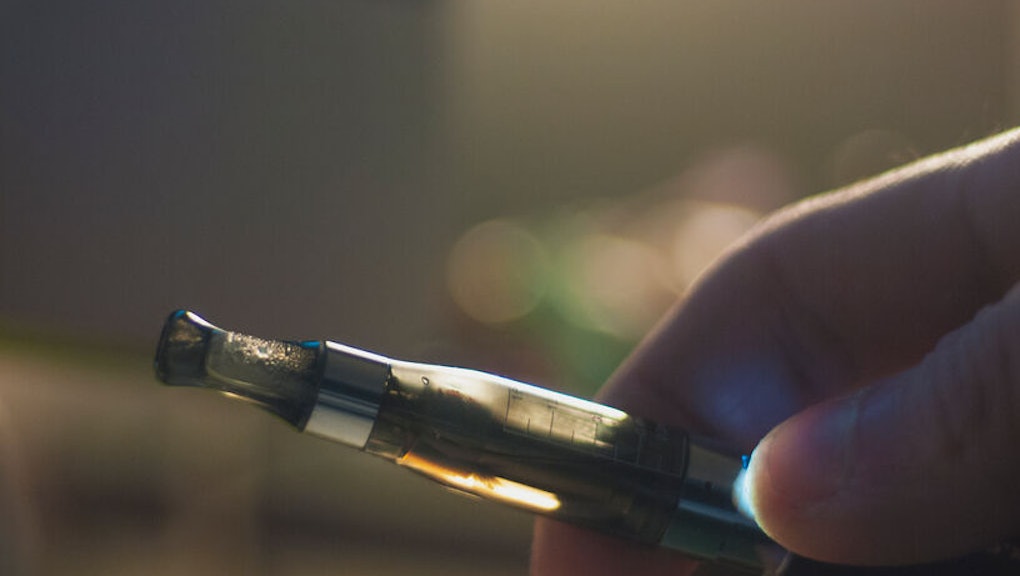 An outbreak of severe lung illness associated with vaping — which has afflicted 1,479 people and killed 33, per the latest Centers for Disease Control statistics — has triggered widespread hysteria. Some states have rushed to ban flavored vapes, and others, to impose a blanket ban on all vapes, flavored or not. In contrast, one state has taken a measured approach, one that actually might be the most effective; Colorado aims to ban vaping additives that are likely harming people, most commonly found in black market products, according to the Colorado Springs Independent.

Colorado’s Marijuana Enforcement Division has proposed finalized rules that include banning polyethylene glycol (PEG), medium chain triglycerides (MCT oil), and vitamin E acetate from cannabis vapes, the Denver Post reports. Some of these substances are fine to be around or even consume, but they may not safe to "smoke."

Studies show PEG forms carcinogens when vaped, while vitamin E acetate has turned up time and again in samples of cannabis products used by those sickened by the apparently vape-related lung illness, per the Washington Post. Adding PEG, MCT oil, and vitamin E acetate helps thin out THC oil, which is otherwise too viscous to be vaporized. (THC stands for tetrahydrocannabinol, the compound in weed that gets you high.) If approved, which seems likely, the rule will go into effect on January 1, 2020.

Colorado’s proposed rule zeroes in on black market THC vapes, which the CDC has linked to most of the lung illness cases and suspects to “play a major role in the outbreak.” Studies have also flagged chemicals found in unauthorized vapes. Aaron Riley, president of cannabis testing lab CannaSafe, told Mic in a story published earlier this month that based on his lab’s analyses, people are likely getting sick specifically from vapes bought from unlicensed dispensaries and delivery services. Indeed, CannaSafe has detected vitamin E acetate, one of the additives included in Colorado’s proposed ban, in 80% of the unauthorized vapes it tested recently.

This focus on regulating specific additives stands in sharp contrast to the so far largely reactive responses to the vaping crisis. The CDC recommends setting aside vapes altogether until investigators get to the bottom of what’s making people sick, while the Trump administration has announced plans to ban sales of flavored vapes, thought to appeal to youth. Some states, such as Michigan, Rhode Island, and Washington State, have already banned flavored vapes, while Massachusetts has banned sales of all vapes entirely, according to Esquire.

But, as VICE points out, such extreme measures can backfire. If the War on Drugs taught us anything, it’s that people will find a way around the law, leading to the emergence of a completely unregulated black market that will only further endanger health. Experts told VICE that vape bans may just encourage the DIY experimentation that got us into this mess; a “gray market” of online sellers who don’t validate IDs already allows youth to easily and affordably buy and mix vape juice ingredients. Colorado’s levelheaded response to the vaping crisis suggests its lawmakers have learned from the mistakes of prohibition policies and don’t intend to repeat them.

More like this
This anti-vaxx doctor is seriously telling lawmakers vaccinated people are "magnetized"
By Tracey Anne Duncan
The benefits of liquid chlorophyll, explained
By Melissa Pandika
COVID-19 antiviral pills could be our reality by the end of this year
By Tracey Anne Duncan
Stay up to date