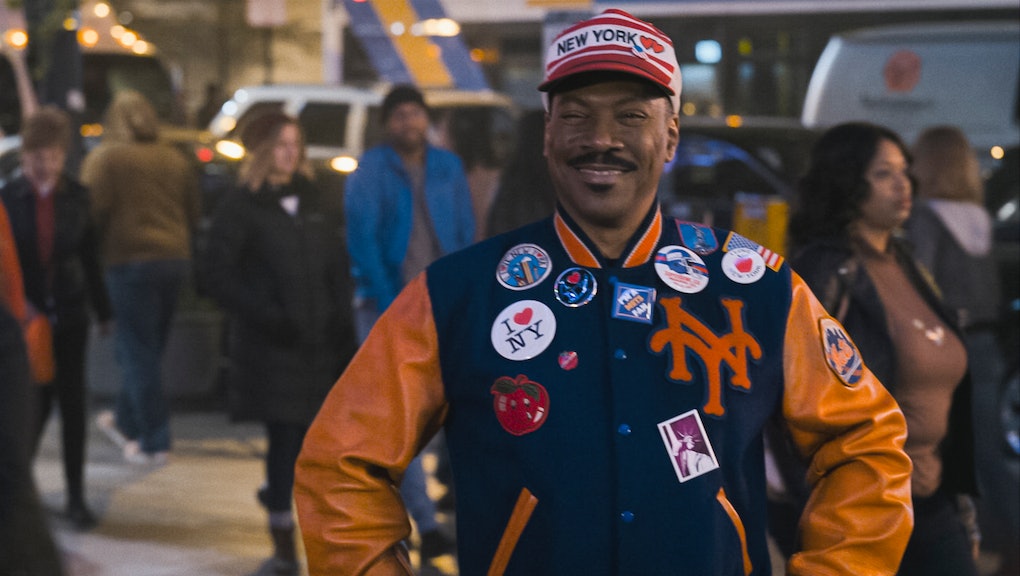 ‘Coming 2 America’ is a dated, unfunny ode to Black Excellence™

Filmed in Rick Ross’s mansion, Coming 2 America is a convoluted cash grab that I don’t believe anyone could relate to on any level. The script is a fusion of woke orthodoxies and raunchy ’80s humor, surrounded by the patina of Black Excellence™. In the original 1988 film, Eddie Murphy plays Prince Akeem — the ruler of the fictional African country of Zamunda — who travels to the United States in order to find a woman who would marry him for his personality as opposed to his prodigious wealth. This leads him to Queens, which in turn leads him to Lisa McDowell (Shari Headley), the enterprising daughter of small-business owner Cleo McDowell (John Amos). In the sequel, we find that Murphy has a son in New York, Lavelle Junson (Jermaine Fowler). This is good news for Murphy because, due to the patriarchal rules of the kingdom of Zamunda, the three daughters he had with Headley aren’t allowed to inherit the throne.

Coming to America told a classic story of American immigration. Whatever status the immigrant held previous to their arrival in the US, once they enter their new country’s borders they join the precarious labor force that holds their society together. Eddie Murphy goes from the ruling class to the working class when he becomes a worker at McDowell’s, an egregious McDonald’s knockoff which forces its employees into tartan getups and whose signature burger is “The Big Mick.”

Though one can easily imagine Murphy spitballing when he came up with the story, the movie hangs together on this savvy reversal of fortune. My family, who came to the United States from Ghana six years after this movie premiered, certainly saw much they could relate to. Every Thanksgiving we would all watch it, and, perhaps, due to my parents and their siblings’ own experiences of displacement, they connected with the absurdities of Murphy’s daily life. The scenes where Murphy found himself struggling to fit in would leave them in stitches. Oddly enough, by parodying their very real struggle, Murphy created an empathetic depiction of their lives.

As Africans and immigrants, they found themselves the butt of jokes due to their accents and their limited access to capital; to have one of America's biggest stars pretend to be one of them entertained them to no end. In the movie, Murphy goes above and beyond the tasks required of him as a minimum-wage worker — at one point confronting a shotgun-wielding robber played by then-unknown Samuel L. Jackson — all the while wearing a shit-eating grin on his face. It’s a look of disbelief: is this really what America is supposed to be? His bemused visage somehow allows him to stay above the myriad indignities he encounters as an immigrant; he’s robbed as soon as he arrives, his apartment is falling apart, and he’s paid pennies for a job that requires him to act as a security guard and bartender as well as janitor. When Murphy views advertisements for Soul-Glo (a Jerri Curl cream), it’s clear that in this new country, it’s not enough that he is on the lowest rung; he has to hate who he is as well. Soul-Glo is mocked by Murphy’s barber, and he remarks to Murphy that it’s best for him to keep his natural hair because it belongs to him.

Although the original film heaped praise on Black entrepreneurship, it was willing to show us Amos’s McDowell, a Black man, exploiting Murphy, another Black man, because he’s a recent immigrant. The conflict at the heart of that film was whether Murphy could elevate himself to Headley’s Lisa when he was simply a poor African immigrant in her eyes. By transforming Zamunda into Wakanda, however, the sequel ditches this inquiry into the complexities of racial solidarity and class. Whether it was intentional or not, the original film managed to ask questions about what people mean when they ask for emancipation through entrepreneurship. Questions like: If the owner of the business selling low-quality food in your city is Black, does that really represent improvement? Coming 2 America’s pageant show of Black talent implicitly says that the only important Black people are those who are attractive or wealthy. Coming to America was very upfront about the deceptions that America sold to Black people, and what made the film relatable was its fixation on the working-class lived experience.

This obsession with putting Black Faces in High Places is probably why 'Coming 2 America' is little more than a succession of cameos by famous and rich Black people.

Coming 2 America jettisons this social commentary, preferring instead to traffic in stories about the glory of wealth creation. When Coming to America was made, its fantasy of a never-colonized Afrocentric kingdom was a revelatory utopia compared to the recession-hit America it accurately portrays. Coming 2 America “updates” this fantasy by arguing that now it’s time for women to run the show. This comes in two forms: in the first instance, Murphy’s eldest Meeka (played by Kiki Layne) is denied the throne because she is a woman; in the second instance, Lavelle’s hairdresser Mirembe (Nomzamo Mbatha) wants to go to America so she can run her own business. Self-advancement is the highest achievement in this film. Therefore, we’re told to ignore the fact that monarchy is by its very nature a deeply unequal system of power regardless if succession is matrilineal or patrilineal. Also, we are supposed to understand Lavelle’s exasperation with his potential arranged bride comes from her disinterest in starting her own business, rather than her not having any interests at all. Coming 2 America seems to believe that empowerment only comes from the individual, not the group.

This unwieldy ideology is what makes the experience of watching the film so odd. This obsession with putting Black Faces in High Places is probably why the film itself is little more than a succession of cameos by famous and rich Black people. Its belief that the world would be a better place if those in power simply had the same skin color as those they rule makes the film feel more dated than the ’80s original. By the end of the film, I half-expected to see a cameo from Kamala Harris. What made the original unique was that for all the expensive costuming and set design, the film was carried by the funny performances of Murphy and Arsenio Hall. In his performance as Semmi, Hall’s disgust at being thrown to the bottom rung of the ladder in a hyper-capitalist America comes through in his haughty demeanor. Yet, in this film both performers are relegated to the background, reduced to objects of mockery.

If the world of Coming to America felt “real” whereas the world of Coming 2 America feels “false,” that feeling likely comes from the latter film’s completely non-adversarial relationship to the powers that be. One can argue that in the 1980s, making a studio film with an all-Black cast that told a story about a working-class immigrant (even a pretend one) was at the very least a challenge to the period’s dominant culture. Making a movie that features many Black superstars doesn’t seem to say much besides that Amazon could afford to pay quite a bit of money to a large group of people. I won’t argue that Coming to America was revolutionary, but I think Coming 2 America removes all of the bite from the original. What Coming 2 America shows is that even if you are a famous celebrity in your native country, you will be forced to do almost anything for a dollar.