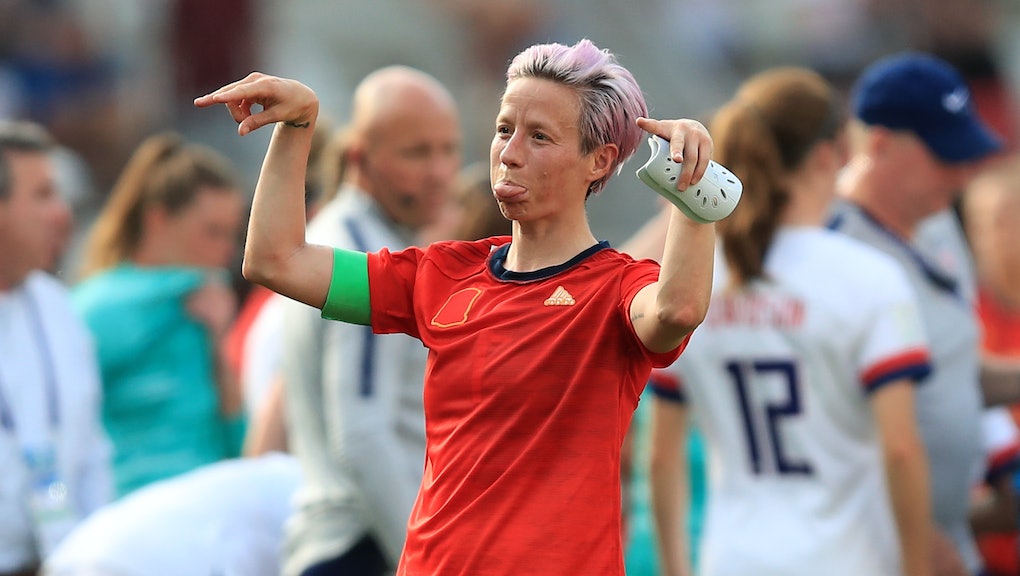 Conservatives are getting super bent out of shape over the fact that Victoria's Secret hired Megan Rapinoe to sell bras to women who aren't supermodels, and it's pretty funny to witness. "What PR agency suggested this garbage? Women want to look like the angels. No one wants to look like Megan Rapinoe," tweeted Jessica O’Donnell, social media editor of The Blaze, a website for "people who love America." To which legions of women pointed out that the pink-haired soccer star and gender equity trailblazer is, uh, objectively smokin' hot. Journalist Jelisa Castrodale fired back with, "The fuuuuck? If I thought Victoria’s Secret would make me look like Megan Rapinoe, I’d be on the way to the mall with a sledgehammer and night vision goggles, and leaving with all the merch I could carry."

Let's back up a bit, shall we? Victoria's Secret, the pink-striped staple of shopping malls everywhere, belatedly realized its longstanding "sexy" image, which equated femininity with Barbie doll proportions and playboy fantasy, was out-of-step with modern values and the #MeToo movement. The brand cancelled its infamous fashion show in 2019, retiring the fluffy, sparkly wings and gem-encrusted lingerie that the scantily-clad supermodels wore to traipse down the runway. Victoria's Secret went through an internal overhaul as well, after revelations that its founder, billionaire Leslie H. Wexner, had ties to Jeffrey Epstein. Not surprisingly, the company was also a toxic, misogynistic work environment.

Victoria's Secret has a comprehensive, multi-part plan to overhaul its image. They're redesigning stores and debuting functional undergarments for nursing mothers and women who've had mastectomies, for example. But the buzziest announcement — and the one that's causing pro-patriarchy types to lose their shit — is the replacement of the Angels with a group of seven women who are known for their extraordinary accomplishments rather than their measurements.

Along with 35-year-old Rapinoe, the VS Collective includes Eileen Gu, the 17-year-old freestyle skier and soon-to-be Olympian, and Priyanka Chopra Jonas, the 38-year-old actor and investor. There's 29-year-old model Paloma Elsesser, who sees partnering with the lingerie brand as an opportunity to "make radical change" and plans to lobby for extended sizing up to XXXXXL. The group also boasts Brazilian trans model Valentina Sampaio, model and South Sudanese refugee Adut Akech, and photographer Amanda de Cadenet, founder of the #Girlgaze platform.

Obviously, most of the people feeling outraged about the demise of the Angels aren't the ones buying bras — they're the ones who celebrated the Victoria's Secret fashion show like a horny holiday. This is the company's own dang fault: it was founded in 1977 as a place where men could feel comfortable shopping for lingerie. Victoria's Secret has a long, uphill battle to wage if it wants to convince real women it's committed to making underwear geared towards their needs instead. With this context, it's pretty hilarious to watch certain men accuse the brand of pandering to the "ugly commie demographic" and tastelessly joke that Victoria's Secret will start selling jockstraps next.

Rapinoe, bless her, doesn't seem phased by the vitriol and is using her platform to ensure that men aren't the sole arbiters of sexiness: "As a gay woman, I think a lot about what we think is sexy, and we are afforded the ability to do that, because I don’t have to wear the traditional sexy thing to be sexy and I don’t think the traditional thing is sexy when it comes to my partner or people I’ve dated," she told The New York Times. "I think functionality is probably the sexiest thing we could possibly achieve in life. Sometimes just cool is sexy, too."