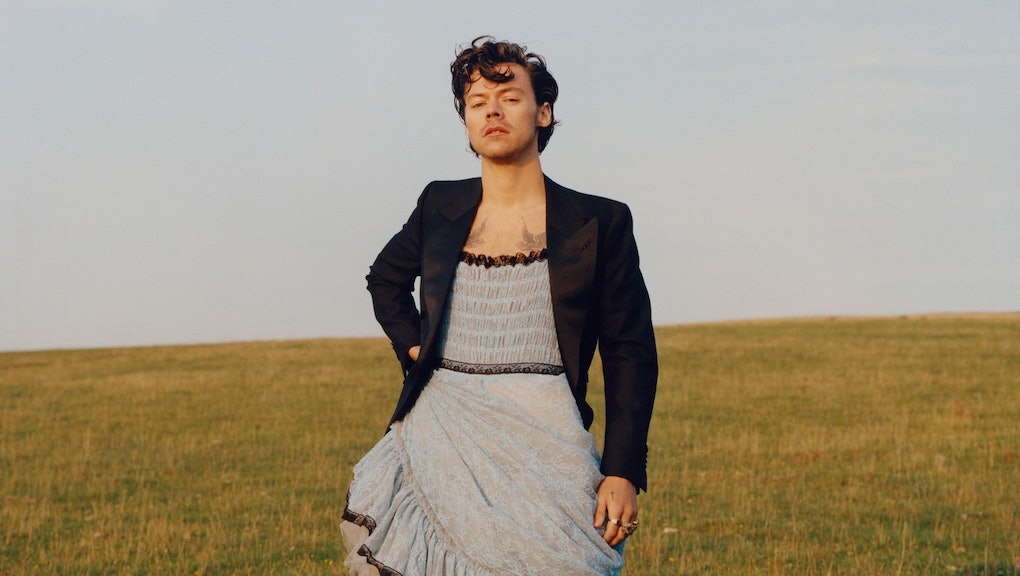 Conservatives are so mad Harry Styles wore a dress in 'Vogue'

You, um, might not be shocked to learn that a couple of people who often profess to be outraged about non-issues are displeased with Mr. Styles and do not find his Vogue photos to be glamorous and alluring. Candace Owens, conservative talking head, accused him of undermining the patriarchy or some shit. To which we say… right on, Harry?

Here’s what Owens spouted on Twitter in response to the musician’s photo shoot: “There is no society that can survive without strong men. The East knows this. In the west, the steady feminization of our men at the same time that Marxism is being taught to our children is not a coincidence. It is an outright attack. Bring back manly men.” I mean, you just have to laugh.

Ugh, and then The Daily Wire founder Ben Shapiro joined the parade of bad takes by retweeting Owens and adding: “Anyone who pretends that it is not a referendum on masculinity for men to don floofy dresses is treating you as a full-on idiot.” Sir, I need to know: what’s your damage?

While some conservatives are getting worked up about Styles destroying masculinity, there’s another extremely valid debate to be had about Vogue’s decision to center a white cis male celebrity as the face of gender neutral fashion. (Harry is the first non-woman to appear solo on the cover of American Vogue, so this is a trailblazing moment.)

Author and performer Alok V. Menon framed the discussion quite thoughtfully on Instagram recently: “Am I happy to see Harry be celebrated for openly flouting gendered fashion norms? Yes. Do trans femmes of color receive praise for doing the same thing every day? No,” they wrote. “It’s a curious thing this: holding space for joy, while also insisting on a more expansive form of freedom.”

Now, I believe that at the heart of Styles’s desire to preen in a breathtaking gown is his deep-seated wish to be David Bowie, reincarnate. He’s professed this desire quite frequently. But, humorously, it’s making conservatives feel rather insecure about their own conceptions of gender and masculinity. But ask any straight woman who’s binged Outlander and lusted after that hunky redheaded fellow: men in skirts can be hot.

Obviously, Styles stans came to their king's defense and roasted Owens and Shapiro mercilessly on social media. The most high-profile own we've seen thus far was delivered by Olivia Wilde, who replied to Owens with a simple: "You're pathetic." Truth hurts, sorry we're not sorry about it.

More like this
The reason Simone Biles quit was more heartbreaking than we could've ever imagined
By Brandon Yu
Colin Kaepernick's new Netflix documentary highlights the man behind the icon
By Keith Nelson Jr.
What's next for the #FreeBritney movement's most devoted supporters?
By Jamie Lee Curtis Taete
Stay up to date