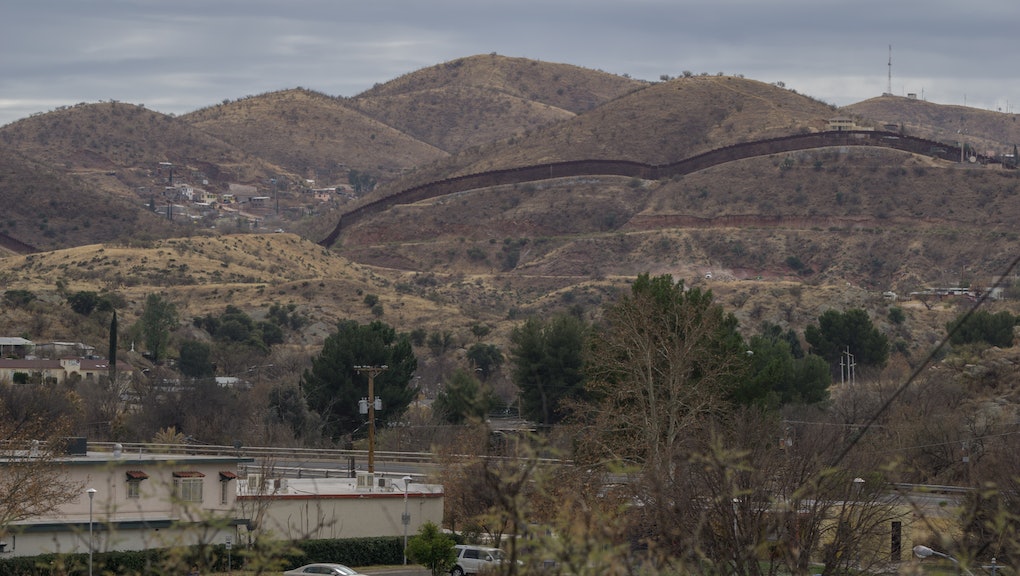 Contractors are still blowing up mountains for Trump's border wall

Joe Biden is now president, but the damages of the Trump administration are still growing. Despite Biden taking the oath of office Wednesday and quickly signing an executive order ending construction of former President Donald Trump's border wall, contractors in Arizona have continued to use explosives to destroy land that is meant to house the now-defunct barrier. They will have seven days to stop the destruction.

The use of explosives in Guadalupe Canyon, located in Arizona's Peloncillo Mountains, was captured by photojournalist John Darwin Kurc. According to Kurc, the dynamiting blasts took place around 11:30 a.m. local time, which would have been 1:30 p.m. in Washington, D.C. Biden was sworn in shortly before noon in D.C., so the blasts occurred about an hour and a half into his presidency.

It's worth noting that President Biden had not yet signed the executive order halting construction on the border wall (which functioned by terminating the national emergency declaration that Trump had declared in order to fund the project). That order, along with a slew of others aimed at undoing the damages of the Trump presidency, was issued several hours after the explosions took place.

But even with Biden's signature on the page putting an end to further destruction or construction at the southern border, the types of explosions documented Wednesday could continue for another week. While Biden's proclamation calls for work to stop "as soon as possible," it grants contractors up to seven days to cease operations. The order also technically does not fully end construction of the border wall, but instead orders a review of all contracts related to the project — though it is expected that Biden will make good on his campaign promise to not build even "another foot of wall."

Any construction at this point is essentially futile, but worse than that, it is doing unnecessary environmental damage. According to the Los Angeles Times, the Trump administration rushed to complete as much construction of the wall as they possibly could before Biden took office, but they largely just left a destroyed landscape that will forever alter the natural terrain. Centuries-old saguaro cactuses have been displaced, ponds containing endangered fish have shrunk, and the San Pedro River, the last undammed river in the American Southwest, was sealed off. The presence of the wall has interrupted the movement and migratory patterns of many species in the region, and wildlife experts have reported seeing a 90% decrease in activity from animals that normally roam without restriction. The wall and the construction that goes along with it threaten the very existence of species like the jaguar, which experts warn could be pushed toward extinction by the project.

And then there's the actual issue of border security. If the wall is truly essential to the safety of the country, as Trump has always claimed, then it would be prudent to stop blowing up the mountain ranges immediately. A report from Business Insider earlier this year noted that the half-finished construction along Arizona's southern border would actually make the area easier for migrants to cross. By destroying the natural landscape — blowing up mountains and other treacherous terrains with the intention of installing a wall — the contractors have actually made an area that was previously unnavigable into something resembling a pathway into the U.S.

Given that the area of Arizona where the construction is taking place is remote and was covered by a naturally challenging landscape, it's not clear that the area needed a border wall to begin with. A report from the Arizona Daily Star found that the region of the state where the explosions were recently documented was previously not a significant path for border crossings, and arrests in that sector were at a three-year low last April.

Whether the explosions in the region continue will seemingly be up to the companies contracted to build the wall. They'll have one week to continue their pointless destruction before it is halted for good. If they continue, they'll likely make the border more porous, all in the name of symbolic "security." That's a fitting end for Trump’s border wall.

More like this
Biden's pledges aren't enough to avoid the worst effects of climate change, new study says
By AJ Dellinger
Eating meat is killing people, but not in the way you think
By AJ Dellinger
Chicago is releasing feral cats to deal with its rat problem
By AJ Dellinger
Stay up to date