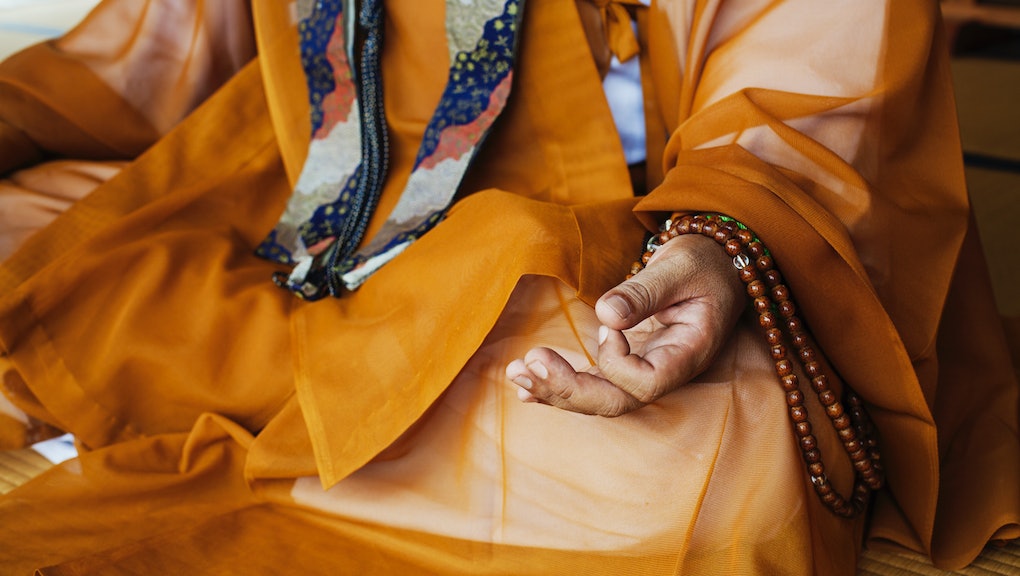 Coronavirus anxiety is inevitable. These Buddhist teachings might help

Buddhist meditation centers and temples in coronavirus-hit countries around the world have been closed to the public in order to comply with social distancing measures.

But Buddhist teachers are offering their teachings from a distance in order to remind their communities about key elements of the practice.

Buddhist leaders argue that their teachings can help confront the uncertainty, fear, and anxiety that has accompanied the spread of COVID-19.

This is not the first time Buddhists have offered their teachings to provide relief during a crisis. As a scholar of Buddhism, I have studied the ways in which Buddhist teachings are interpreted to address social problems.

He later ordained a group of friends and students into this way of practice.

In recent years many Buddhists have been actively involved in political and social issues throughout much of Asia as well as parts of the western world. The following five teachings can help people in current times of fear, anxiety and isolation.

Buddhist teachings state that suffering, illness and death are to be expected, understood and acknowledged. The nature of reality is affirmed in a short chant: “I am subject to aging … subject to illness … subject to death.”

This chant serves to remind people that fear and uncertainty are natural to ordinary life. Part of making peace with our reality, no matter what, is expecting impermanence, lack of control and unpredictability.

Thinking that things should be otherwise, from a Buddhist perspective, adds unnecessary suffering.

Instead of reacting with fear, Buddhist teachers advise working with fear. As Theravada Buddhist monk Ajahn Brahm explains, when “we fight the world, we have what is called suffering,” but “the more we accept the world, the more we can actually enjoy the world.”

Mindfulness and meditation are key Buddhist teachings. Mindfulness practices aim to curb impulsive behaviors with awareness of the body.

For example, most people react impulsively to scratch an itch. With the practice of mindfulness, individuals can train their minds to watch the arising and passing away of the itch without any physical intervention.

With the practice of mindfulness, one could become more aware and avoid touching the face and washing hands.

Meditation, as compared to mindfulness, is a longer, more inward practice than the moment-to-moment mindful awareness practice. For Buddhists, time alone with one’s mind are normally part of a meditation retreat. Isolation and quarantine can mirror the conditions necessary for a meditation retreat.

Yongey Mingyur Rinpoche, a Tibetan Buddhist monk, advises watching the sensations of anxiety in the body and seeing them as clouds coming and going.

Regular meditation can allow one to acknowledge fear, anger and uncertainty. Such acknowledgment can make it easier to recognize these feelings as simply passing reactions to an impermanent situation.

When emotions around fear or anxiety become too strong, Buddhist teachers say one should recall examples of compassion, kindness and empathy. The pattern of fearful and despairing thoughts can be stopped by bringing oneself back to the feeling of caring for others.

Compassion is important even as we maintain distance. Brother Phap Linh, another Buddhist teacher, advises that this could be a time for all to take care of their relationships.Dealing with isolation.

This could be done through conversations with our loved ones but also through meditation practice. As meditators breathe in, they should acknowledge the suffering and anxiety everyone feels, and while breathing out, wish everyone peace and well-being.

Buddhist doctrines recognize an interconnection between everything. The pandemic is a moment to see this more clearly. With every action someone takes for self-care, such as washing one’s hands, they are also helping to protect others.

The dualistic thinking of separateness between self and other, self and society, breaks down when viewed from the perspective of interconnection.

Our survival depends on one another, and when we feel a sense of responsibility toward everyone, we understand the concept of interconnection as a wise truth.

5. Use this time to reflect

Times of uncertainty, Buddhist teachers argue, can be good opportunities for putting these teachings into practice.

Individuals can transform disappointment with the current moment into motivation to change one’s life and perspective on the world. If one reframes obstacles as part of the spiritual path, one can use difficult times to make a commitment to living a more spiritual life.

Isolation in the home is an opportunity to reflect, enjoy the small things and just be.

This article was originally published on The Conversation by Brooke Schedneck. Read the original article here.

More like this
These landmarks' racist names are finally being changed to honor Indigenous people
By Sarah Dees
The "male" or "female" brain thing is not real after all
By Lise Eliot
To legalize weed successfully, we need to draw inspiration from Canada
By Michael J. Armstrong and Paul Seaborn
Stay up to date