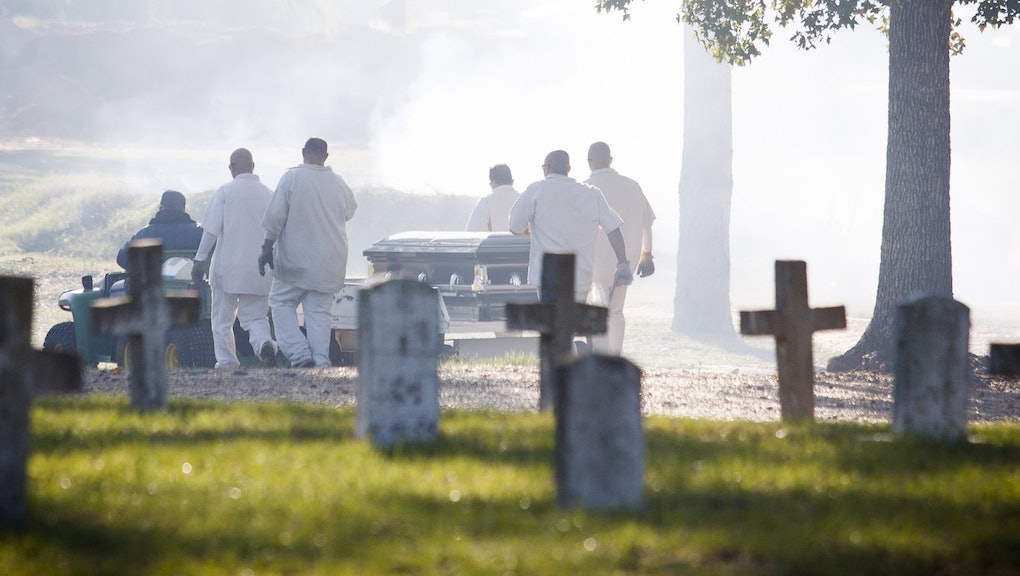 Coronavirus is keeping prison families from saying their last goodbyes

By Maurice Chammah and Nicole Lewis
May 9, 2020

Last month, María Felícitas Infante Zamora and her siblings heard from Texas prison officials that their father, Bartolo Infante, had died. Infante, 72, had been in prison since 2000 for a sexual assault.

The family did not learn the cause of death directly from officials: They only learned that he had tested positive for COVID-19 from a news article they came across on Facebook days later.

Then came another blow. Infante’s relatives could not afford to hold their own funeral, so the Texas Department of Criminal Justice said it would bury him at a prison cemetery. But the family would not be able to attend the burial because gatherings put people at increased risk of contracting or spreading the virus.

“They said, ‘We’re just going to give you a picture of him and that’s it,’” Zamora said. The picture would be of her father’s body at his funeral.

Infante was incarcerated in the Telford Unit, near the Arkansas border, but will be buried at a prison cemetery in Huntsville, roughly 150 miles from Lockhart, where Zamora and her mother live.

A TDCJ spokesman, Jeremy Desel, said he had no specific information about why the family was told they could not attend, but pointed out that outside of prisons, many funerals have been postponed as state and local governments ban public gatherings to halt virus transmission.

At least 63 people in state and federal custody have died from the coronavirus, according to data collected by The Marshall Project. We reached eight families who lost someone to the pandemic. Some are still wrangling with prison officials to even obtain the bodies of their loved ones and to learn basic information about their final days. And their grief is compounded by the fact they’ll have to mourn at a safe distance from their families as coronavirus puts large gatherings on hold.

Given the massive number of elderly prisoners around the country, deaths are hardly rare in federal and state prisons, as well as jails. Every state and county has its own protocol for what it will pay for and what happens when family members either cannot be found or are unable or unwilling to handle the remains and arrangements.

In New York, the unclaimed are buried in mass graves on Hart Island in the Bronx. In Illinois, where several people incarcerated at Stateville prison have died from coronavirus, the decision to bury or cremate the unclaimed dead is left up to each warden. Officials in New Jersey cover the cost of cremation for any unclaimed person.

When Frank McCoy, who was incarcerated at FCI-Elkton, a federal prison in rural Lisbon, Ohio, died on April 2, officials tried to reach his son Jason McCoy. McCoy says the first call came around 1:30 a.m. He didn’t pick up, so officials left a voicemail urging him to call back. When they didn’t hear from him after several days, the Bureau of Prisons sent a local police officer to his job to break the news.

“The last time I talked to [my father] was to tell him that mom died.”

McCoy’s mother had also recently passed away after a long battle with dementia. “I lost both of my parents in a short time period,” McCoy said. “The last time I talked to [my father] was to tell him that mom died.”

Because McCoy has no remaining family, he opted to have his father cremated and sent home in an urn. He says the bureau is paying for everything.

The average funeral can cost nearly $8,000, according to the National Funeral Directors Association. A spokesperson for the prison bureau said they pay for “preparation of the deceased inmate’s body, the casket, and transporting of the body to the family’s funeral home” in some circumstances. But due to the “high volume of inquiries,” they are “unable to address specific inmates’ cases.”

After years of frustration over dealing with prison officials, some families have declined the bureau’s offer. The mother of Patrick Jones, the first federal prisoner to die from COVID-19 complications, decided she would pay for all the death arrangements herself, according to Jones’s stepdaughter, Lateasha Crumpton-Scurry. “She just wanted to have closure and see her son,” Crumpton-Scurry said.

Many of the first victims of coronavirus in prison died in nearby hospitals. Across the country, hospital staff have built makeshift morgues as people die in record numbers. As the bodies pile up, officials in some cities have shortened the window of time people have to claim their family members.

In Texas, state prisoners bury their peers in a state-run cemetery. Families, if they don’t handle the body themselves, are usually allowed to attend. But the Infante family’s experience suggests that the coronavirus may continue to upend policies. The family of Joe Kearney, the first Michigan state prisoner whose death is linked to COVID-19, also said they were not allowed to see his body.

Little is currently known about how COVID-19 spreads from the recently deceased to the living. The World Health Organization has said that cadavers are “generally not infectious,” although researchers recently reported one case of a medical examiner contracting the virus from a dead body in Thailand.

Under normal circumstances, the death of an incarcerated family member is often shrouded in secrecy. When a prisoner is hospitalized, state and federal prison officials sometimes inform their relatives. But several families said officials would not provide hospital information, so they could not directly ask about the course of treatment or prognosis. Officials have also been criticized for exacerbating the trauma of families by leaving voicemails informing them of their relatives’ death.

A lack of information has frustrated Kathy Wilson, the wife of James Wilson, who died on March 29 at the federal prison in Oakdale, Louisiana, after testing positive for COVID-19 and suffering respiratory failure. Wilson said her husband “seemed fine” when they spoke a few days before his death. She is furious that she was never informed that he was severely ill. “A wife should know that their husband is in a hospital with a virus,” she said. “Somebody there could have taken five minutes to call and tell me.”

When someone dies in prison, even without a pandemic, some families struggle for years to gain insight into their final days. Coronavirus has erected more barriers in their search for answers. Testing is limited in many facilities, and many family members say officials have not done enough to prevent the virus from spreading behind bars.

Eddie James may never find out if coronavirus killed his son. Ricky James died at Mid-State Correctional Facility in Fort Dix, New Jersey, on April 3. James says the week before his son died, he had called his girlfriend several times to say he was sick and worried that his incessant coughing and chills were symptoms of coronavirus.

But according to James, the prison refused to test Ricky — even after he died. He says officials told the family that the medical examiner determined that his son died from heart disease. But James is skeptical. He’s 64 years old, and has been living with heart disease for several years. His son was 36 when he died.

James looked into having an independent autopsy to determine the cause of death, but it proved too expensive: It would have cost $5,600 on top of the $12,000 he spent to bury his son.

Nineteen guards and five prisoners at the New Jersey facility where James died have tested positive for coronavirus as of April 15, according to an online dashboard posted by the New Jersey Department of Corrections.

The first guards tested positive on April 1, according to a spokesperson for the department. The spokesperson would not confirm whether James was tested for coronavirus, saying that “an incarcerated person’s medical record is confidential, even in death.”

James is making the funeral arrangements from his home in California. But he won’t be able to attend the service. Flying into New Jersey, where more than 2,800 people have died from coronavirus, is too risky. But he hopes the funeral home will stream the service so he can watch online.

With so little information from prison officials, some families have gleaned details from other sources. Crumpton-Scurry, the stepdaughter of Patrick Jones, said her family happened to know a corrections officer, who told them about the Louisiana prison’s failures to prevent the spread of infection.

Olivia Garcia first heard that her father was sick from a family member of Jeffrey Riviera, who was incarcerated with her father, Margarito Garcia-Fragoso, at Elkton-FCI in Ohio. Garcia-Fragoso died on April 2. In a press release, officials said the 65-year-old had “long-term, pre-existing medical conditions,” which put him at a higher risk of complications from the virus.

“Ever since my father’s passing the phone just rings and rings.”

Garcia says their description doesn’t match how she remembers her dad. She says her father stayed healthy and active while in prison, and that he never mentioned any medical conditions. As she makes arrangements to bury him, she is working to get access to her father’s medical records.

But she says she can no longer reach officials at Elkton. “Ever since my father’s passing the phone just rings and rings,” she said. Other families expressed similar frustrations.

Like many families whose relatives have died in federal custody, Garcia says the BOP offered to pay to prepare her father’s body and to send him home in a casket. On April 10, Garcia-Fragoso’s remains returned to Racine, Wisconsin.

With the help of Maresh-Meredith & Acklam Funeral Home, Garcia is planning a small private funeral and burial. But with the number of coronavirus cases steadily rising in the states, many family members won’t be able to say their goodbyes in person. Garcia says her family is spread across the country, with relatives in California, Chicago, and Texas. Her grandmother, Garcia-Fragoso’s mother, still lives in Mexico.

The funeral home will livestream the service and guests are invited to attend the procession and interment, but they must stay in or near their cars to prevent any potential transmission of the virus.

Being separated from her family while mourning her father is “the hardest part,” of the whole ordeal, Garcia said.

“His family is not going to have the closure that we all need,” she said. “We can’t even have a gathering here and support and hug one another because we have to be careful ourselves.”