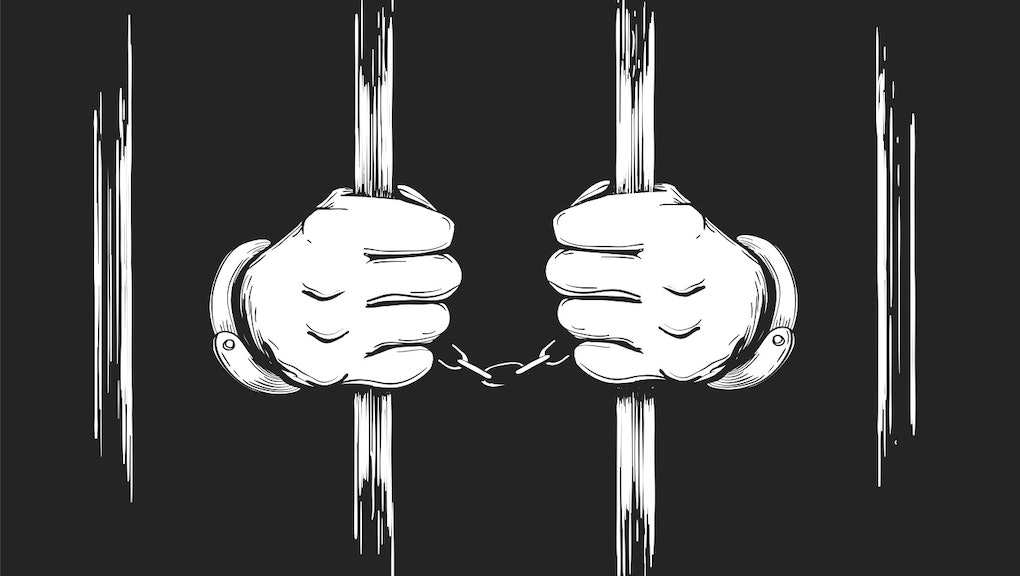 Curtis Holly broke into tears as the judge in Manhattan criminal court announced that he had to put up bail or sit in jail. Charged with choking his wife during a fight the night before, Holly declared through his lawyer that he was too poor to afford bail and too sick to go into the Rikers Island jail complex, where a COVID-19 outbreak is underway.

Holly says he has an immune disorder, asthma, and an infected gunshot wound to his leg. The prosecutor calmly detailed Holly’s several felony convictions, and said that while the victim didn’t want to press charges, the photographs of her injuries justified bail of $25,000. The judge reduced it to $5,000, but eight days after his court appearance Holly remained in jail.

With courts across the country largely closed by coronavirus, defendants recently charged with felonies can expect long waits for justice. Whether they spend that time in a possibly virus-infested jail cell or at home depends on where they get arrested.

California, striving to reduce the risk of infection in crowded jails, has ordered judges to free those accused of most lower-level felonies on $0 bail.

New York, in contrast, has suspended legal protections that limit jail time to six days for those who have not been indicted by a grand jury.

One of Curtis Holly’s defenders said locking up the sick and infirm amounted to “a death sentence.”

New York's jail population is at a 70-year low, thanks to a dramatic decline in arrests during the COVID-19 lockdown and some humanitarian releases of vulnerable inmates. But defense lawyers say those who remain behind bars in the city and many other jurisdictions have essentially lost their right to a speedy resolution.

"Even though we are in the midst of a pandemic, the most important state and federal constitutional protections are still in place," said Timothy W. Hoover, president of the New York State Association of Criminal Defense Lawyers. But now defendants “don’t get the hearing. They are held without the opportunity to challenge the evidence, and they are stuck in these jails.”

In a statement after his court appearance, one of Curtis Holly’s defenders said locking up the sick and infirm amounted to “a death sentence.”

In normal times, those accused of felonies are brought before a judge, who decides whether to impose bail. Then prosecutors present evidence to a grand jury, which votes whether to indict. If the district attorney fails to get an indictment before a deadline — six days in New York — the person can plead with a judge to go free.

Since the outbreak of coronavirus, some states, including New York, Florida, Iowa, and New Jersey, have suspended grand jury hearings altogether. While it is easy for a judge to work remotely — Curtis Holly faced the judge on a Skype video call — safely assembling a group of citizens for a grand jury is more difficult. New York court officials have deemed grand jury hearings as non-essential while the virus rages. New York Gov. Andrew Cuomo in his March 22 stay-at-home order also suspended the six-day deadline that allows a defendant to seek release.

Only about one in four people charged with a felony in New York State are indicted by a grand jury, state data shows. Prosecutors often drop cases within the six-day window if victims or witnesses refuse to cooperate, or if the case seems too weak to lead to a conviction.

“People who could have their cases resolved, they are now sitting in jail.”

With the suspension of grand juries, “people who could have their cases resolved, they are now sitting in jail,” said Stan German, executive director of New York County Defender Services.

There is no consensus, even within New York City, about how local courts and prosecutors should handle people arrested during the COVID-19 outbreak.

The governor and all five of the city’s district attorneys have focused on releasing the most medically vulnerable inmates, especially from Rikers, where hundreds of staffers and detainees have tested positive for the virus.

Brooklyn District Attorney Eric Gonzalez has taken the most liberal approach, ordering his prosecutors to roll back bail requests except for serious violent crimes.

“Incarceration for the sake of incarceration doesn’t make us safer,” Gonzalez told The Marshall Project. If bail is set in Brooklyn, prosecutors have to fill out a “COVID form” that details why they asked for bail and whether the suspected criminal has any health risks.

Then a “COVID Response Team,” which Gonzalez leads, digs deeper into the case. Prosecutors reach out to victims and witnesses to determine if they will cooperate with a grand jury once the courts reopen. “We are making sure that no one is being held,” Gonzales said, “without us having the ability to move forward.”

The Brooklyn D.A.’s office says only about 30 people arrested in its jurisdiction are being held in a city jail waiting for grand jury hearings to resume. Almost all are charged with murder, rape, and other serious violent crimes.

A spokesman for New York State’s court system said that because of the shutdown he could not fulfill a public records’ request for bail data.

Prosecutors’ demand for bail in Manhattan courts fell 38 percent in the last three weeks, according to a Marshall Project analysis of data from the district attorney’s office, but that may be due to the fact that citywide arrests have dropped by more than half as the city has shut down.

Over three weeks in April, The Marshall Project spent 14 hours at Manhattan criminal court watching the newly arrested face a judge on Skype. At first, only public defenders seemed concerned about the virus outbreak at Rikers. But by the month’s end, COVID-19 seemed to weigh on the minds of both judges and prosecutors.

During night court last month, in three cases that involved various felony assaults including a mother accused of beating her 11-year-old with a closed fist, prosecutors and the judge allowed people to stay out of jail while waiting for grand jury hearings to restart.

Many prosecutors across the country do take the threat of coronavirus into account when considering bail, said Lucy Lang, who spent a dozen years working in the Manhattan D.A.’s office and now heads up Institute for Innovation in Prosecution, a think-tank at John Jay College of Criminal Justice in Manhattan.

But with court systems closed, it’s harder for authorities to monitor the whereabouts of a recently arrested person, especially if they don’t have stable housing or steady work, she said, adding that prosecutors “are trying to reduce the number of jail admissions, but do it in the safest possible way for the community.”