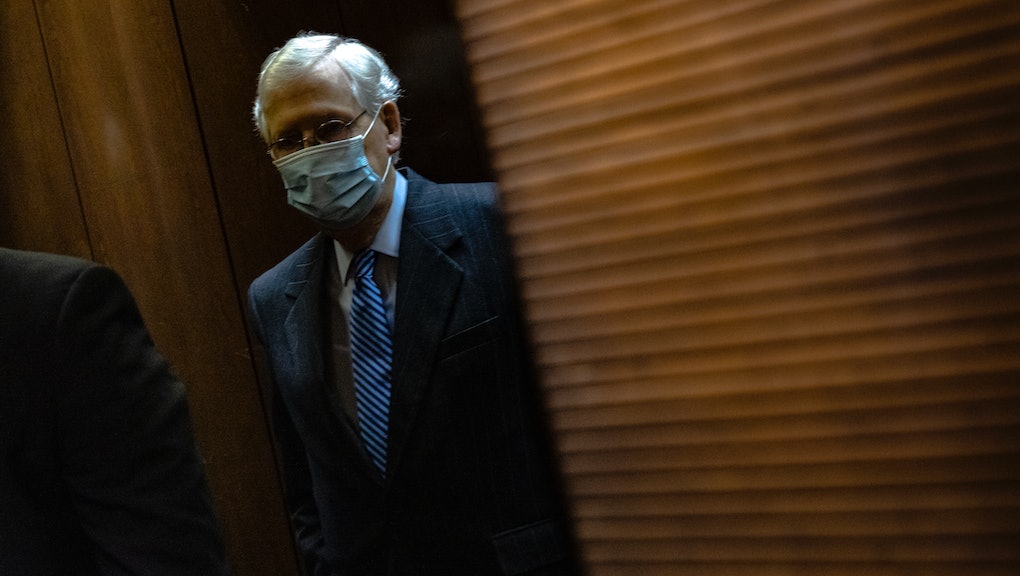 Despite the fact that ballots are still being counted in the presidential race, Senate Majority Leader Mitch McConnell is already planning his next move. According to The Hill, McConnell, who just won a seventh term in office, is planning on resuming coronavirus relief talks in the Senate on Monday when the upper chamber is back in session.

Congress has until Dec. 11 to pass a number of pieces of legislation — a resolution to keep the government funded after that date, a bill to put a Band-Aid on the economic havoc families in the U.S. have endured this year, and a series of judicial confirmations. Having already appointed about a quarter of all sitting federal judges, Trump still has some outstanding nominees — and it looks like McConnell might try to squeeze a few more in this term.

The Republican Senate will be able to confirm President Trump's judicial nominees easily. What's less certain is whether or not members of Congress will be able to come together on a coronavirus spending bill and relief package, given how far apart the parties have been thus far. The $2 trillion HEROES Act relief package was approved by Democrats in the House in May, but McConnell has refused to bring the bill up in the Senate.

Since then, House Speaker Nancy Pelosi has been engaged in relief talks with Treasury Secretary Steven Mnuchin. Mnuchin has reportedly been more willing to compromise with Democrats than the Republicans on Capitol Hill. But lawmakers have clashed on a number of items within the potential legislation itself, including whether to offer another round of direct stimulus payments to Americans and how much aid to give to businesses.

Given that Election Day saw the second-highest single-day reporting of coronavirus infections, it's clear that Americans still need coronavirus relief — and fast. For now, what that looks like is still up to McConnell and the Senate.