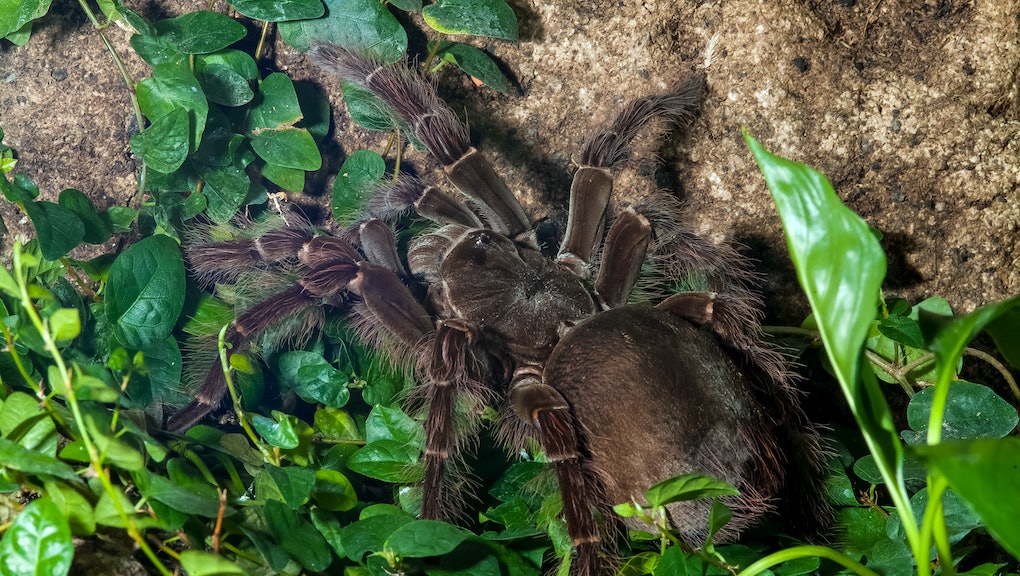 Could Irritable Bowel Syndrome relief come from this giant tarantula?

As someone who lives with it, I can assure you that irritable bowel syndrome (IBS) really does feel as crappy as it sounds. It hurts, for starters. Symptoms of the large intestine disorder include stomach pain, along with gas, bloating, diarrhea, and constipation. Since there are so many factors that can exacerbate it, doctors often recommend lifestyle changes and medication to treat it. I know it's 2020 and nothing surprises me anymore but this potential new form of relief is an eyebrow-raiser. Apparently, venom from a huge, bird-eating spider could help people with IBS, EurekAlert reported yesterday.

Researchers isolated two molecules from the venom of the Venezuelan Pinkfoot Goliath tarantula that show promise in relieving gut pain in people with IBS, based on experiments in mice bred to model the condition, per EurekAlert. They detailed their findings in a study published in the journal Pain last month.

To be clear, this research is still emerging, and only a double-blind, placebo-controlled, randomized clinical trial could definitively establish whether these molecules can treat IBS pain. Still, you have to admit, the findings are incredibly fascinating.

Chronic visceral pain, or pain of the internal organs — like the gut pain people with IBS experience — results from the dysfunction of voltage-gated ion channels in sensory neurons, which open and close in response to stimuli, per EurekAlert. Treatments for chronic visceral pain have remained largely elusive, though.

Spider venom contains a bunch of protein building blocks known as peptides that can block voltage-gated ion channels, preventing them from opening, Richard Lewis of the University of Queensland, who led the study alongside other researchers, told EurekAlert. The problem is, they can block voltage-gated ion channels that play a role not only in chronic visceral pain, but also in proper functioning of the heart and other organs.

Lewis and colleagues screened venoms from more than two dozen spiders, EurkAlert explains. They homed in on the most promising venom, from the Venezuelan Pinkfoot Goliath tarantula, a scary-yet-oddly-cute creature that can take down birds, and whose leg span can reach around a foot.

They then isolated two peptides from this venom, which turned out to be very selective, blocking the voltage-gated ion channels most implicated in pain. One of them even reduced the sensitivity of the colon and bladder’s sensory nerves, and nearly prevented chronic visceral pain in mice that modeled IBS.

These two tarantula venom peptides may be used to not only treat pain, but help scientists understand the pain underlying different diseases. On a Monday in 2020, this is the weird yet hopeful news all of us, especially IBS sufferers, need.

More like this
How scientists detect COVID-19 variants before they wreak havoc
By Darwin Bandoy and Bart C. Weimer
This new coronavirus-repelling mask has a shady chemical in it. Is it worth it?
By C. Michael White
Why this Miami private school doesn't want their teachers vaccinated
By Tracey Anne Duncan
Stay up to date