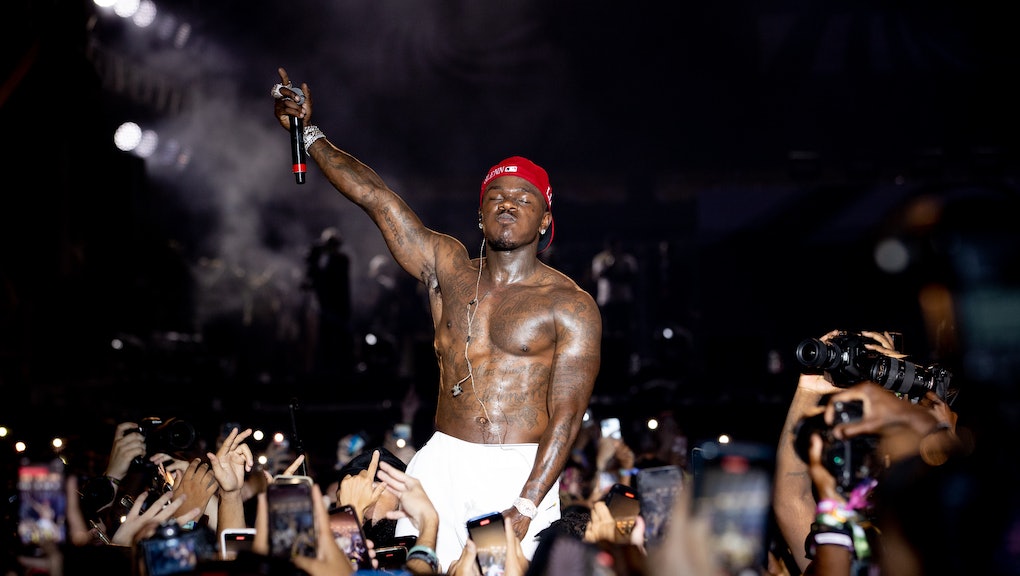 Let me preface this with one point: DaBaby has no idea what he's talking about. And if you have any common sense, your brain will be frustrated before you're done reading this article.

Last night, at Rolling Loud Miami, DaBaby turned a call for crowd participation into a homophobic diatribe that insulted fans and online viewers attending one of their first music festivals in more than a year.

During his performance last night, DaBaby asked for his fans to pierce the Miami night sky with cell phone lights, an act of live showmanship as old as the first iPhone. For an inexplicable reason, DaBaby decided to eschew the traditional asking for fans to raise their phone lights if they were his day one fans, happy to be alive or even simply if they just were ready for the show to continue. Instead, he chose this time to only want cell phone lights raised in the air from women with water-smelling vagina, fans who do not have HIV, AIDS, or any STD that "make you die in two or three weeks," and male fans who were not engaging in oral sex with other men in the parking lot.

Even if you wanted to give DaBaby the benefit of the doubt and chalk his irresponsible homophobia up to being in the heat of the moment of his first festival performance in over a year, he gave an explanation that was worse than the original offense. In a series of videos posted to his Instagram Stories the following day, the multi-platinum artist gave what can only be described as a comprehensive guide on what I call "boomerang deflection," where sending shots at detractors ends up missing their point and coming back to harm the person who volleyed them in the first place. Let's break it down section by section to truly elucidate how deeply warped DaBaby's view on homosexuality and homophobia is.

He starts off the series of videos by calling the uproar over his homophobic comments as nothing but "internet shit," while addressing it on the internet. Then, he explains how his gay and straight fans were enjoying the show, saying he was turning up with a male fan wearing a crop top, intimating he believes he was turning up with one of his gay fans simply based on the man's attire. He then broke down that he chose to ask for only people who don't have deadly STDs and weren't men engaging in oral sex in the parking lot with other men as simply "a call to action" to get into his next song which was his "For The Night" collaboration with Pop Smoke, a song that contains no lyrics that allude to anything in that "call to action." But, then he further justified his "call to action" by definitively stating none of his gay fans have AIDS or any deadly STDs because they take care of themselves and "ain't no nasty gay niggas." To conclude, he curiously placed some of the blame on Rolling Loud for streaming his rant, stating people who weren't at the show weren't supposed to see that portion of a performance that had been advertised as being live streamed for weeks.

In the matter of roughly 75 seconds, DaBaby didn't apologize for singling out people with STDs, generalized homosexuals who had STDs as "nasty gay niggas," assumed he knew the health status of every homosexual fan he has, and then placed the blame on the very festival for broadcasting a performance he was well aware was being broadcasted when he said what he said on stage. To make matters worse, the entire controversy occurred mere seconds after he not only "surprised" fans by bringing out alleged domestic abuser Tory Lanez to tepid fan reactions, but also after he performed his verse from "Cash Shit," a song from Lanez's alleged victim Megan Thee Stallion. And this is only weeks after Megan made her disdain for DaBaby's collaboration with Lanez publicly clear in a Twitter exchange with the North Carolina native. A man who was once one of the most beloved new artists in hip-hop is nearing a point of no return like a few of his hip-hop predecessors.

There's one thing you'll always see in hip-hop when a rapper says something objectively stupid or harmful: like-minded rappers asking for people to open their mind to new opinions. Earlier this morning, T.I. decided to post a comment on Instagram stating DaBaby and Lil Nas X are equally entitled to speak their truth. After that reach of false equivalency, he went on Instagram Live to say while he salutes Lil Nas X for living his truth, he doesn't want his children watching the imagery he puts out because "their minds haven't developed to a place where they can wrap their minds around those type of experiences and those type of visual presentations and know how to sort it out within their perception." He justified that stance by saying he also doesn't want his children watching Cardi B and Megan Thee Stallion's "W.A.P." video for the same reason. Yes, two women and an openly gay 22-year-old displaying a level of sexual content commonplace for a genre as raunchy as hip-hop is what makes a frequent purveyor of such salacious content want to protect his kids from it.

T.I. and DaBaby are clear examples of heterosexual males masking homophobia as simply different opinions spurred by a recent movement of homosexual visibility in popular culture. Beyond the fact T.I. literally once said in a 2011 VIBE Magazine interview people should be able to voice their opposition to homosexuality in peace and has used the term "faggot" multiple times in songs in his 15-plus year career, his hypocritical view of free speech is what makes his open-mindedness with homophobia tantamount to giving prisoners more space in a prison and calling it freedom. The same man who said everyone should be entitled to their opinion felt the exact opposite in 2016 when Lil Wayne claimed in a Nightline interview he had no connection to any of what Black Lives Matter represents.

T.I. was absolutely livid at his frequent collaborator's comments, and wrote a scathing Instagram caption calling Wayne's comments "completely unacceptable," and went as far as to say they were effectively "bringing shame on your family name & tarnishing your legacy." The source of his anger in Wayne's First Amendment-protected opinion was the fact Black people are oppressed and being slaughtered by racists in America. And that's why people like T.I. and DaBaby will denounce racially insensitive opinions while defending homophobic ones — because the plights of oppressed homosexuals has no tangible effect on their personal lives. Lil Wayne not identifying with Black Lives Matter is no more hurtful than DaBaby thinking all homosexuals with STDs are dirty and unsafe.

DaBaby and T.I. either don't know or don't care that LGBT people are four times as likely to experience violent crimes compared to non-LGBT people. The former he's beginning to reach a level of cultural ubiquity in his young career that T.I. once possessed, where they feel any opinion they have is not only warranted but above reproach. That point is almost surely followed by fans being more interested in controversy than in anything they put out musically. DaBaby can dress up his comments however he wants — he’ll have to wear his homophobia no matter what he says.