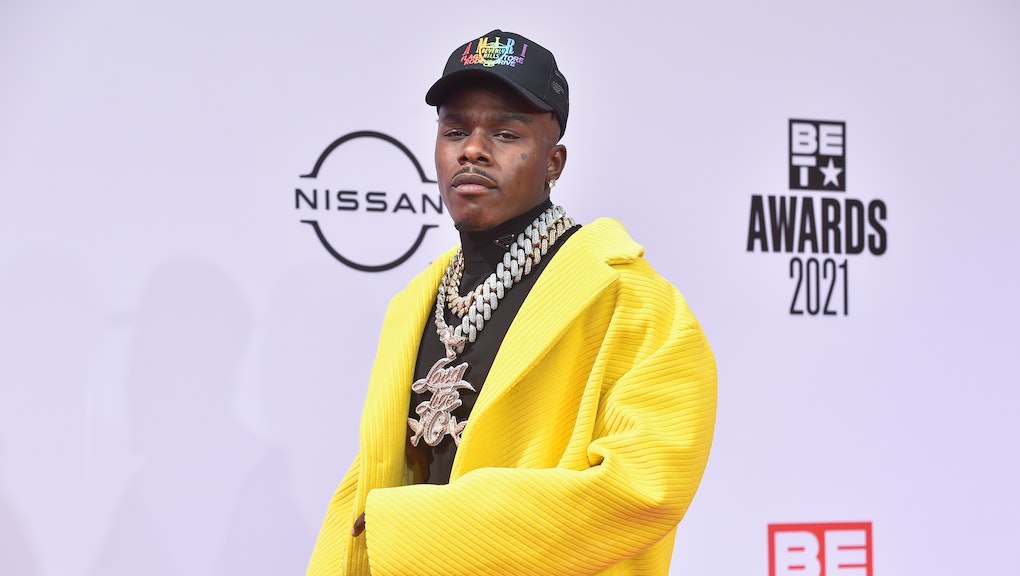 DaBaby isn't done being wrong — and it's costing him his career

DaBaby isn't done being wrong, and the world isn't done letting him know. A day after Questlove took to his personal Instagram page to denounce DaBaby's homophobic language, DaBaby responded by saying he had no idea who Questlove was, a lie so easily disproven it highlights the delusion necessary for a rapper to believe they've done nothing wrong when the world says otherwise. And within three days, he got a cold slap of reality as he was removed from the lineups of music festivals Lollapalooza, Governors Ball and Day N Vegas.

Weeks prior, in promotion for the revelatory documentary Summer of Soul, Questlove created a hypothetical festival lineup of artists he'd like to perform at a modern day Summer of Soul. DaBaby was one of those artists Questlove selected, an inclusion he rescinded in an Instagram post detailing how "morally wrong" DaBaby's homophobic comments were, paraphrasing Black Panther Party co-founder Huey P Newton's plea to Black people to not oppress others the way we had been for centuries. In his message, Questlove predicted DaBaby would categorize him "old hater," and the 29-year-old rapper proves him right.

DaBaby claiming he doesn't know Questlove is his way of devaluing the legendary drummer's importance, thus allowing DaBaby to justify why he generalizes Questlove as simply as another hater wishing to "play follow the leader," as he wrote in his Instagram story response. Defense mechanisms are usually reflexive, and as such aren't ruled by logical thinking. If a chair is thrown at your face, your reflexive defense would be to put your hands up to block, even if you're well aware it won't help. DaBaby claiming ignorance of Questlove's entire existence is proven an illogical lie by a simple Google search: he performed on The Tonight Show Starring Jimmy Fallon in October 2019 with The Roots as his backing band, and he was slated to rock at last year's The Roots Picnic music festival before it was canceled due to the pandemic.

Minimizing the severity of offensive comments by attributing the criticism to "haters" is the go-to excuse for rappers emboldened to say whatever they feel by the success they derive from doing just that on the mic. Earlier this year, Meek rapped on a leaked song, "I'm goin' out with my chopper, it be another Kobe," clearly referencing Kobe Bryant's death in a helicopter which crashed in January 2020. After Bryant's widowed wife Vanessa Bryant told the rapper in an Instagram story the lyric was "extremely insensitive and disrespectful" Meek let the public know he privately apologized to Mrs. Bryant. But, he made sure people didn't think he was being pressured into doing so by the public criticism he received, noting he wasn't going to respond to a "viral moment" and claiming "it becomes a trend to hate on me every once in a while." Similar to DaBaby reducing Questlove's articulately fair criticism to the ramblings of a stranger, Meek described the disgust people felt about him literally making a punchline out of Kobe Bryant's death as nothing more than another overblown overreaction by people on the internet with a conspiratorial vendetta to hate on all things Meek.

Deflection through minimization is only one trick rappers employ, but it's not their favorite. That distinction goes to inflating one's importance to a level that essentially makes it seem as if the backlash is simply beneath them. In a tweet responding to the controversy, DaBaby implies the deluge of personal attacks he's experiencing is a result of his divinely ordained elevation to becoming an icon. To DaBaby, he was "tryna be a rapper for like one more year," indicating he's now ascended beyond merely being someone who makes rap music into a realm of cultural ubiquity where any infraction ripples as far as your influence. This false sense of superiority is central to why DaBaby can't seem to just say he messed up without giving a pride-preserving excuse, and why so many rappers in the past felt they were above punishment.

By January 1991, Dr. Dre and N.W.A. were demigods on the West Coast for ushering in the region's first major hip-hop movement by popularizing gangster rap with their iconic album Straight Outta Compton. On January 27, Dre brutally assaulted female journalist Dee Barnes over her interview with former N.W.A. member-turned-rival Ice Cube on her Fox hip hop show Pump It Up!, on an episode that also featured the group's remaining members. Following the incident, Dre reductively described the gruesome ordeal to Rolling Stone: "no big thing, I just threw her through a door." Brutalizing a woman is only a minimal infraction to someone who feels they're bigger than it.

The organizers behind Lollapalooza and Governors Ball removed DaBaby from their lineups due to each festival being founded on embracing diversity and inclusivity. If he continues down this path, it may be the start of am ignominious decline no rapper deflection handbook can help.

DaBaby has posted an apology. Via Complex: