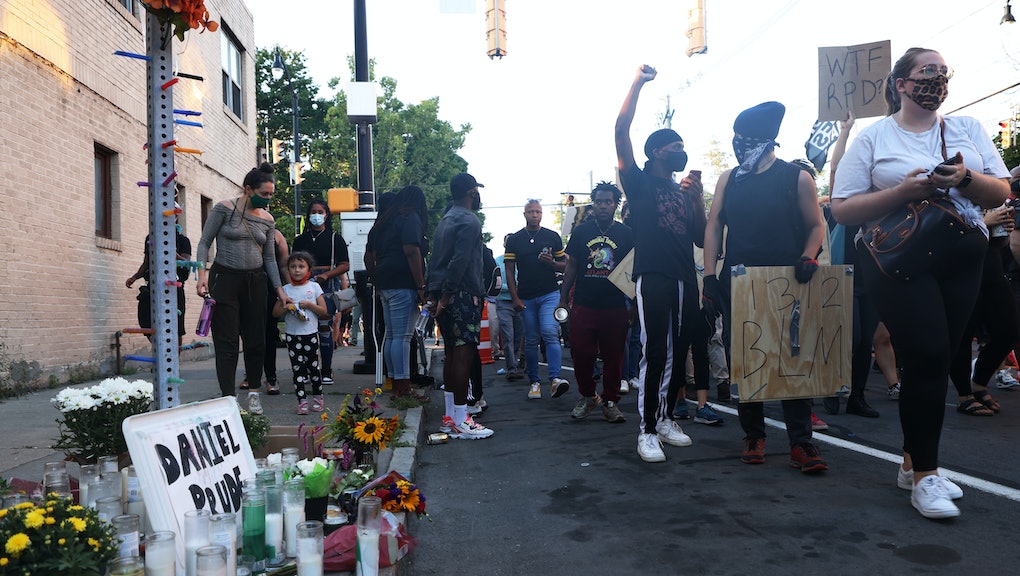 Nearly six months after Daniel Prude, a 41-year-old Black man visiting relatives in Rochester, New York, died in police custody, seven of the officers involved in Prude's death have been suspended. The action was announced by Rochester Mayor Lovely Warren (D) on Thursday.

According to Prude's family's attorney, police had initially been called by Prude's brother Joe, who described him as being in the midst of "an acute, manic, psychotic episode."

In just-released video of the incident, the officers found Prude naked and unarmed in the street, and proceeded to cover his head with a hood designed to prevent suspects from spitting on officers. They then are seen holding him down against the pavement for several minutes — during which time Prude allegedly stopped breathing. He died seven days later in the hospital. A toxicology report later found low levels of PCP in his system.

Prude's death, which took place nearly two months before the police killing of George Floyd in Minneapolis set off a wave of social justice protests across the country, was officially attributed to "complications of asphyxia in the setting of physical restraint." It went largely unreported at the time and has only recently gained national traction, following the release of police footage of the incident.

In a press conference this week, Warren claimed she was never initially informed of the circumstances surrounding Prude's arrest. She said she only learned about the fact that he had been hooded and restrained when she saw the video of his arrest in early August.

"When our officers responded on March 23, I was informed that day by [Rochester Police] Chief [La’Ron] Singletary that Mr. Prude had an apparent drug overdose while in custody,” Warren explained. “Chief Singletary never informed me of the actions of his officers to forcibly restrain Mr. Prude. I only learned of those officer’s actions on Aug. 4 when corporation counsel reviewed the video while fulfilling the FOIL request from Mr. Prude’s attorney. At no time, prior to Aug. 4, did Chief Singletary, or anyone, make me aware or show me the video of the actions of the RPD officers involved in Mr. Prude’s death."

"They treated my brother like a piece of garbage," Joe Prude said during a press conference earlier this week. "What do you do to garbage? You throw it out. So, that’s basically what they’ve done to my brother."

Speaking with reporters Thursday, Warren stressed that her decision to suspend the seven officers involved in Prude's death was done against the advice of city lawyers, saying that Prude "was failed by our police department, our mental health care system, our society, and he was failed by me."

"I understand that the union may sue the city for this," she added. "They shall feel free to do so."

According to Joe Prude, his brother Daniel was unambiguously "lynched."

"When I say get lynched, that was full fledged, murder, cold-blooded — nothing other than cold-blooded murder," he told WROC. "The man is defenseless, naked on the ground, cuffed up already. I mean come on, how many brothers got to die for society to understand that this needs to stop?"