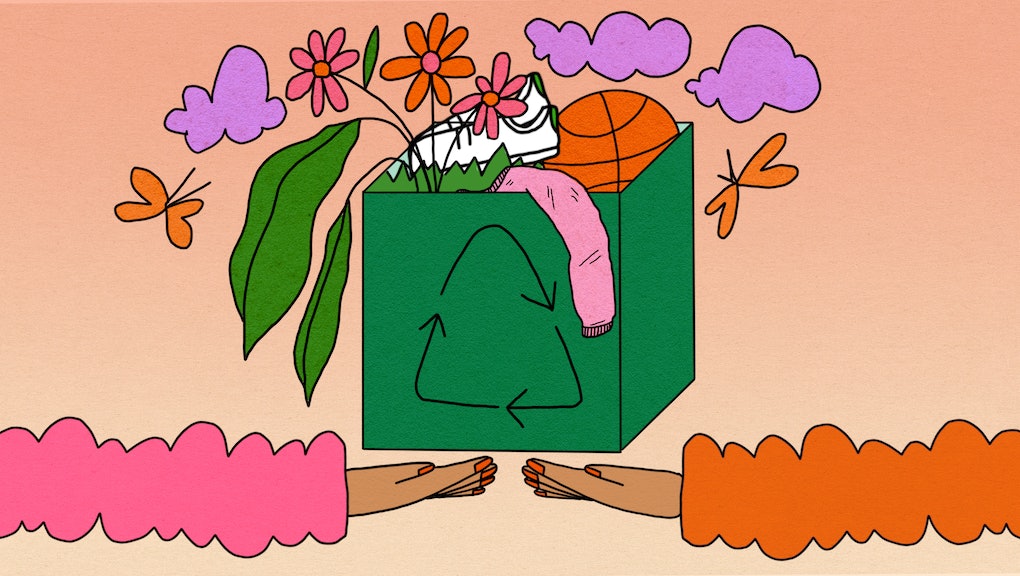 Decluttering is bad for the planet. Here’s how to do it sustainably

Picture your neighborhood garbage truck. Got it in your mind? Now picture 29,000 of them, lined up end to end, stretching from Sacramento to San Jose, California. Then, finally, picture all those trucks, brimming with trash and dumping it all in a landfill, every single day.

In the United States, that’s not hyperbole; it’s reality. Every year, we send nearly 150 million tons of waste to the landfill — an amount equal to roughly 2.5 pounds of trash per person, per day. In 2018, that included 9 million tons of clothing and shoes, 9.6 million tons of furniture, and 1.6 million tons of small appliances. That’s bad news for the planet, considering landfills account for 12% of global emissions of methane, a dangerous greenhouse gas responsible for at least a quarter of today's global warming.

If you’re thinking, “I don’t contribute to landfills! I donate my unwanted things!”, you should know that indiscriminate donating is sometimes the opposite of helpful. Thrift stores run by the National Council of the Society of St. Vincent de Paul, for example, are only able to sell or give away about half of what they receive, says CEO Dave Barringer. While the remainder is sold to secondary vendors, like online booksellers and overseas clothing markets (which, side note, can be problematic), roughly 5% of St. Vinnies’s donations still end up in landfills.

Though 5% might not sound like much, consider the fact that the four largest U.S. thrift chains — St. Vinnies, Goodwill, The Salvation Army, and Deseret Industries — receive approximately 4 billion pounds of clothing each year, according to Barringer. Clearly, being more thoughtful about what we donate — not to mention what we consume and recycle — could have a positive impact on the environment.

Sustainability expert Ashlee Piper, who wrote the book Give a Sh*t: Do Good. Live Better. Save the Planet., calls this concept “ethical offloading.” “It’s a completely different way of thinking about our stuff and our responsibility for the end-life of our stuff,” she tells Mic. Rather than pell-mell dumping everything into a donation box, in other words, Piper advises rehoming your unwanted things “with intention,” doing your best to ensure they'll be reused — or at least recycled. Here are six ways to declutter more responsibly.

If you A) have had zero luck selling your stuff on sites like Facebook Marketplace and Poshmark, or B) simply want to get rid of it fast, you might view the thrift store as your automatic next stop. But Piper suggests trying one more avenue first: the gift economy.

“I always recommend people look into their local free groups: Freecycle and Buy Nothing groups on Facebook, the free sections of Nextdoor, and Craigslist,” she says. “Those are really good options if you’re looking to just get the item out of your home and out of your life in a more responsible way.” By finding an eager new owner for each specific item, she says you’ll reduce its chances of ending up in a landfill.

Piper says Buy Nothing groups, which are part of the larger Buy Nothing Project, also provide an outlet for offloading goods that you can’t sell or donate, like opened food items or beauty products. Though every group has different rules, Piper has used hers to give away everything from vitamins to romaine lettuce.

“A lot of living more sustainably and frugally is about being creative and unashamed of reusing items in a way that you might not have imagined before.”

While it might be tempting to Marie Kondo your entire apartment and drop off every non-joy-sparking thing with a flourish at your local thrift store, Barringer says that’s not the most ethical choice. One reason? Most thrift stores don’t do cleaning or repairs. “There’s no magic that happens between the point of donation and when it shows up in the store,” he says. “If it didn’t work for you, it’s not going to work for us.”

Yes, that means thrift stores don’t want your stained clothing or broken electronics (but we'll review how to offload those later). When you’re deciding what to donate, Barringer offers the following rule of thumb: “If you wouldn’t give it to your grandmother, don’t give it to a charity.”

Beyond that, Barringer urges you to check with each individual store to learn what it does and doesn’t accept, as regulations vary by state and municipality. Donating unwanted items not only increases the likelihood your stuff will end up in a landfill; it also creates unnecessary expenses for the nonprofit, in terms of both labor and trash. “Every dollar a charity spends on dumping fees is a dollar we can’t put toward our mission,” Barringer says.

Take time to research the organization to which you’re donating, too. Specifically, Barringer warns against those ubiquitous parking lot donation boxes, as many are run by for-profit companies. And, as NBC 5 Chicago reported in 2019, some have little-to-no available information on who’s behind the bins and where exactly the items go.

“On the one hand, you could say it’s ethically responsible because they’re not putting it in a landfill,” Barringer says. “But you can multiply your value if you’re giving [your stuff] to a legitimate charity.” In that vein, attach a note to any valuable or unique items you donate — that way, the charity will know what they are and how to price them, thereby generating more money for the community.

Opt for repair or creative reuse

When you’re wondering what to do with an item that’s broken or torn, think about your grandma again: She probably would’ve found a way to repair or reuse it. “We have this mindset that if something is broken, and it might just need a small tweak, we have to trash it,” Piper says. “One of the parts of being a responsible owner of things is to embrace repair whenever possible.” Even if the cost of repair is comparable to replacement, you’ll be able to feel good knowing you not only saved one more thing from the trash, but also avoided further consumption.

Of course, if you truly don’t want or use the item anymore, you might not be willing to pay for a costly repair. In that case, Piper once again suggests listing the item in Buy Nothing or another community free group, as you may find a member who likes to tinker. If it’s a larger item, like an appliance, she advises checking with local waste management agencies and scrap metal dealers, who might recycle it for a nominal fee.

You can also get creative: Use holey socks as rags, dusters, or windshield defrosters (among countless other possibilities); and repurpose old T-shirts into doggy tug toys or stuffing for pet beds. (If you want to make the latter option super easy, the company Molly Mutt even sells dog bed covers you can fill with old clothes.) As Piper says, “A lot of living more sustainably and frugally is about being creative and unashamed of reusing items in a way that you might not have imagined before.”

If you can’t find any other use or home for your item, it might be time for the third “R”: recycle. Even materials that don’t qualify for the blue bin can be recycled through specialized programs. Search online for options in your city (ie: “mattress/textile/appliance recycling near me”) before mailing something out. By staying local, you’ll avoid the environmental impact of shipping, as well as keep any potential profits in your community.

That said, if you’re coming up empty-handed, here are some national options for offloading hard-to-place items:

You can also use the website Donation Town to find local charities that will accept donations of various specific items. And for many of these categories, as well as other discards you have lying around, Terracycle offers paid zero-waste recycling boxes for everything from action figures to eyewear. Dozens of major brands — including Burt’s Bees, Colgate, Gerber, Kroger, and Tom’s — also offer free recycling programs for their packaging through the company.

If you balk at the idea of paying to recycle, you may be learning an important lesson. “Not everything that’s going to be ethically offloaded is going to be free,” Piper says. “That’s something to consider when you’re buying a new piece of furniture or something large that might be difficult to offload at the end of its life.”

Exhausted? Then you’re doing things right. According to Piper, going through the time-intensive process of ethical offloading often causes people to think twice about future purchases, because they’ll need to do it all over again down the road. “The fewer things we have, the fewer things we have to worry about the end-life of,” she says.

To make life easier for future sustainable you, Piper suggests first limiting your consumption (which is crucial, considering capitalism is a major cause of the climate crisis) — and then when you do need to buy something, imagining how you’ll dispose of it. As a general rule, she recommends avoiding single-use items (looking at you, bagel slicer!) and instead prioritizing high-quality products that serve multiple purposes. She also encourages purchasing items secondhand, through local thrift stores or sites like ThredUp, Poshmark, and Mercari; or, if buying new, from companies dedicated to circular production, like Sabai and Emeco for furniture, Patagonia and Girlfriend Collective for clothing, and Thousand Fell for shoes.

The bottom line, as Piper says: “If you can keep an item in good condition, and having that function and that utility for years to come, you’re not contributing as much to what is a growing problem that we simply do not have the resources to handle.”