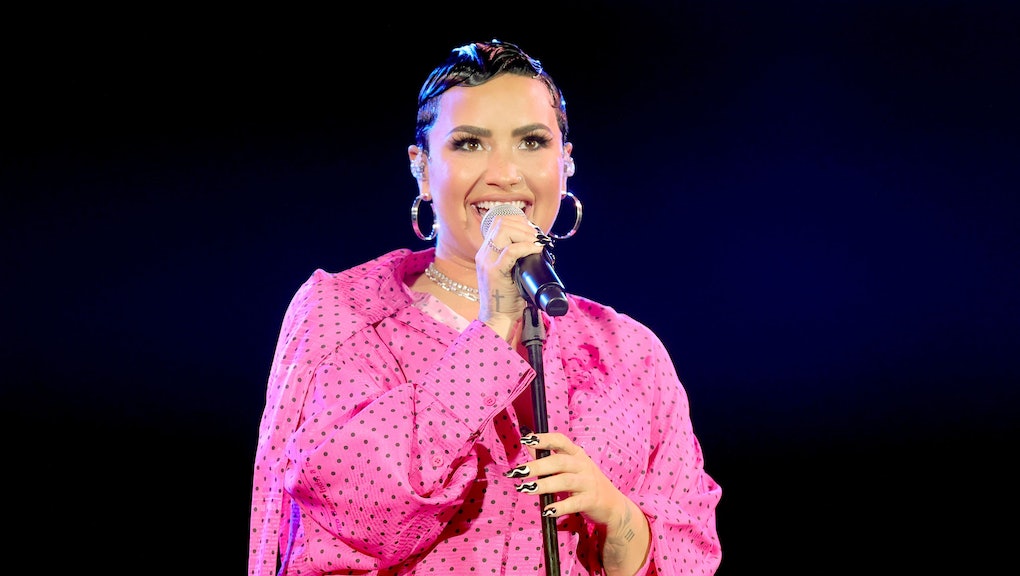 Demi Lovato and the quest for a triggerless world

An objectively miniscule incident was magnified over the weekend, because one of the parties involved is famous. Basically, Demi Lovato beefed with a frozen yogurt store, accusing them of pushing diet culture, which she found triggering. But what the drama actually exemplified is that we, as a society, are really bad at talking about the realities of eating disorder recovery.

Here’s the scoop: Lovato criticized The Bigg Chill in Los Angeles for selling “tons of sugar free cookies/other diet foods” and implored the shop to “do better please.” She appended #dietculturevultures to her Instagram Story, saying she’d use the hashtag to call out businesses "that perpetuate a society that not only enables but praises disordered eating."

The froyo shop defended itself, saying they carry a variety of treats for customers with dietary restrictions, like vegans, celiacs and diabetics. "We are not diet vultures," The Bigg Chill wrote. "We cater to all of our customers’ needs for the past 36 years. We are sorry you found this offensive." But Lovato doubled down, calling the whole thing “triggering and awful.” She chastised the business for not considering customers with eating disorders, too. “Don't make excuses, just do better,” the singer wrote.

Froyo fans then attacked Lovato, accusing her of canceling a small business. Piers Morgan whined that the pop star was trying to ruin his favorite “yoghurt” shop. So on Monday, she issued a half-hearted apology, explaining she wasn’t targeting a small business, just being vocal about her everyday struggles. Lovato said dealing with her drug addiction has been easier than her eating disorder, because she can walk away from drugs, but she has to eat.

Anyhow, I’m pretty self-conscious to have already spilled 200 words on a froyo fight, but the story sparked the question: is a triggerless world possible, and should we even try to create one? To understand a little more about eating disorder recovery and where Lovato was coming from, Mic talked to licensed clinical psychologist Aimee Daramus, Psy.D. She stressed that she can only comment in general, since she’s never met or assessed Lovato, but her insight was illuminating.

Mic: Did Demi overreact to sugar-free froyo? Is learning to live with triggers an important survival skill?

Aimee Daramus, Psy.D.: Triggers are automatic and irrational, and working on them is a long, complicated process. You can have them under control for a long time, and then if you’re tired or under a lot of stress, they can pop out all over again. This is especially true of eating disorders, because you can’t abstain from your triggers. You have to face food multiple times a day, and bad diet and exercise advice is all over the place even for those of us who don’t have a celebrity’s pressure to stay thin. At the same time, I can see where it was an abuse of power.

When is a trigger acceptable versus inconsiderate?

If you want to be supportive of someone with a mental illness, you have to be able to hold two different beliefs at once: that they will be triggered at times, and that it is OK to set boundaries around behavior when triggered. You can both call someone out on their behavior toward that business and show patience and support for recovery at the same time. You want to be able to set boundaries in a caring way, like, “We love you, but this is how you were out of line, and we need you to work on this.”

How does someone mindfully respond to triggers when they inevitably encounter them?

So ideally, the person would learn to respond to a trigger by taking ownership, like, “I know I’m triggered by this, and I can do my best with my coping skills.” People learn over time not to blame and how to cope, but it’s a tough journey and it’s normal to backslide sometimes, which is where you need others’ help with those firm, caring boundaries.

More like this
Caitlyn Jenner's campaign is off to a great start!
By Rafi Schwartz
The NFT gold rush, explained by the world's first meme manager
By Kara Weisenstein
How “stoopers” turned New York City sidewalks into trendy, sustainable thrift shops
By Jasmine Vojdani
Stay up to date