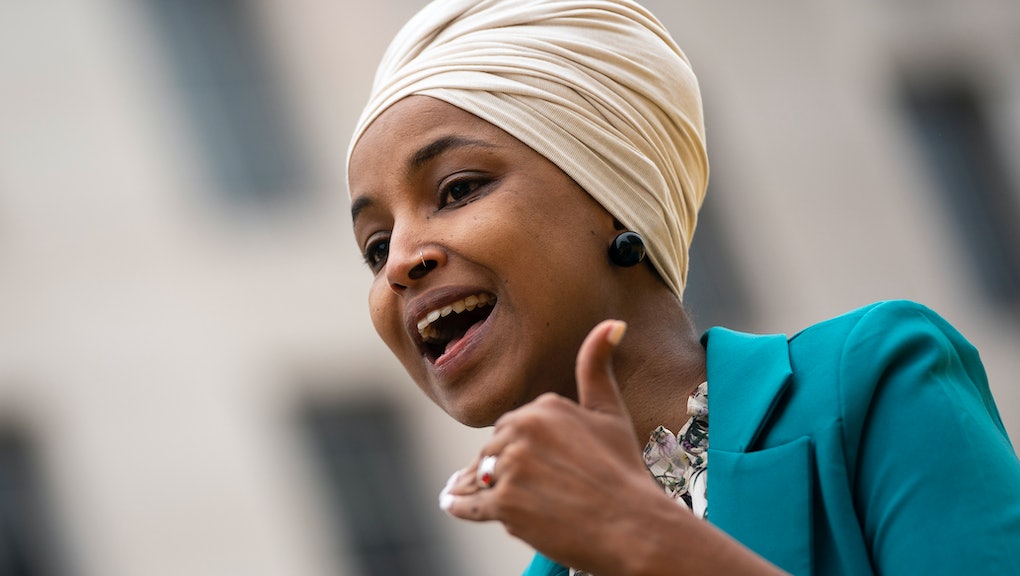 Democrats' attacks on Ilhan Omar are embarrassing for everyone

Minnesota Democratic Rep. Ilhan Omar issued a straightforward statement Thursday, pushing back on a bizarre effort by members of her own party to single her out for having the gall to ask where — if anywhere — victims of wartime atrocities can take their legal claims.

"On Monday, I asked Secretary of State Antony Blinken about an ongoing International Criminal Court investigation," Omar said. "To be clear: The conversation was about accountability for specific incidents regarding those ICC cases, not a moral comparison between Hamas and the Taliban and the U.S. and Israel."

Omar's statement followed several days of grotesque threats against her life, and the lives of her staffers, after she tweeted a clip of a congressional hearing with Blinken in which she pressed him on his recent opposition to the International Criminal Court.

For anyone with listening comprehension somewhere above a 4th grade level, Omar is clearly talking about judicial authority and the lack of legal outlets available to those whose victimhood cannot be addressed in domestic courts. But for those predisposed to attacking Omar for being an outspoken [Black woman/Muslim woman/immigrant — take your pick], her comments reignited the same bad faith allegations of antisemitism and anti-Americanism she's faced her whole career. In particular, critics leapt upon her for, they claimed, insinuating that both the United States and Israel have indeed committed war crimes, just as have non-governmental groups like the Taliban and Hamas.

That Omar was targeted for speaking out about issues in the Middle East — and in particular, between Israel and Palestine — is hardly a surprise, given her long history of being Republicans' favorite straw man for bad-faith allegations of antisemitism among Democrats. Her statement Thursday, however, was not a response to conservative attacks, but in fact to attacks from fellow Democrats, who alleged Omar's tweet about Blinken was "as offensive as it is misguided" and "at worst reflects deep-seated prejudice."

"As usual, the far-right is ginning up hate against Rep. Omar for a technical question about an ongoing investigation," Omar's communications director Jeremy Slevin said in a statement Thursday morning. "This has already led to an increase in death threats against her and our staff."

"And now," Slevin continued, "some of her own Democratic colleagues are ginning up the same Islamophobic hate against her, accusing her of giving 'cover to terrorist groups' simply for exercising oversight over a criminal investigation."

"It’s shameful for colleagues who call me when they need my support to now put out a statement asking for 'clarification' and not just call," Omar herself tweeted early Thursday morning. "The Islamophobic tropes in this statement are offensive. The constant harassment and silencing from the signers of this letter is unbearable."

According to Politico, Omar even tried reaching out to some of the Democratic signatories while their statement was still being drafted, but to no avail.

Even after Omar released her statement making the very basic point that she was discussing historical facts in the context of the International Criminal Court, and not equating the U.S. and Israel with terrorist institutions like Hamas and the Taliban, her colleagues continued their pile-on. A statement from House Democratic leadership decried a "false equivalency" that "foments prejudice" before saying they'd "welcome" a "clarification" from Omar, which she'd already released just hours earlier.

It's hard, then, to see just what House Speaker Nancy Pelosi and the rest of her leadership team were hoping to accomplish in their ex-post-facto criticism of Omar, beyond adding fuel to an already red-hot fire tinged with Islamophobia.

Which isn't to say Omar was left entirely out to dry by those she ostensibly considers colleagues. Fellow Minnesota congresswoman and longtime progressive critic of Israel and American military actions Betty McCollum responded to the uproar by lashing out at the "hypocrites at the [National Republican Congressional Committee]" and their "silence when the Trump administration sat down with the Taliban to negotiate a diplomatic agreement without the Afghan government while American service members and Afghan civilians were being attacked and killed."

Reps. Ayanna Pressley (D-Mass.) and Alexandria Ocasio-Cortez (D-N.Y.), Omar's fellow Squad members, also came to her defense, as did Rep. Cori Bush (D-Mo.). But whether the rest of the Democrats will take the hint, and stop feeding the organized campaign of bad faith attacks against one of the most high-profile members of their own party, remains to be seen.

More like this
"She's gonna disappear": A GOP congressional candidate threatened to sic Russian hitmen on his opponent
By Rafi Schwartz
At least Mitch McConnell is honest about being terrible
By Rafi Schwartz
Here's a chilling peek into just how close Trump got to running a police state
By Rafi Schwartz
Stay up to date