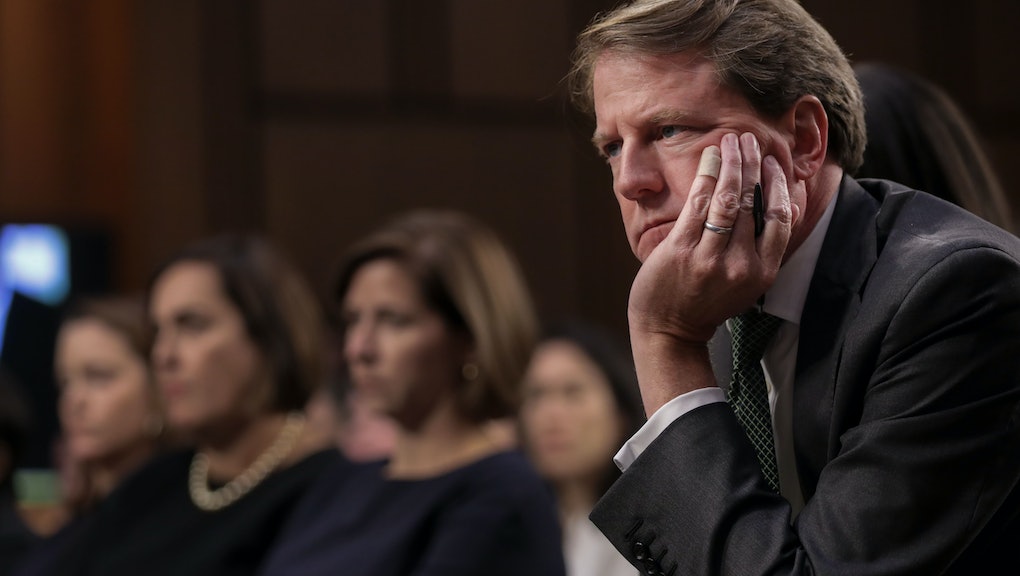 Democrats forge ahead on impeachment even as court enables more testimony

"[I]f a duly authorized committee of Congress issues a valid legislative subpoena to a current or former senior-level presidential aide, the law requires the aide to appear as directed, and assert executive privilege as appropriate," Jackson wrote. "Donald McGahn must appear before the Committee to provide testimony, and invoke executive privilege where appropriate."

The Trump administration has been predictably resistant to impeachment proceedings, repeatedly encouraging officials to refuse to comply. Justice Department lawyers have insisted members of Trump’s inner circle possess “absolute immunity,” in order to preserve the integrity of the president’s interactions with them, per Politico. Jackson’s ruling pokes holes in their reasoning; she deemed the argument “fiction.”

“DOJ promotes a conception of separation-of-powers principles that gets these constitutional commands exactly backwards,” Jackson asserted. “In reality, it is a core tenet of this nation’s founding that the powers of a monarch must be split between the branches of the government to prevent tyranny.”

Even though Jackson insisted McGahn and “other current and former senior-level White House officials” are bound to testify by law, the decision only covers McGahn’s testimony. Hearing from other officials is another battle altogether. John Bolton, Trump's former national security adviser, refuses to speak until a judge requires him to do so — and he specifically indicated that he wouldn't necessarily be swayed by a ruling about a separate official's testimony, though Jackson's ruling appears to have anticipated some of his counterarguments.

Regardless of the White House’s efforts to stall the investigation, Democrats plan to blaze ahead. CBS News reports that the House committees conducting the investigation plan to provide a report on their findings to the House Judiciary Committee soon after Thanksgiving. The House Judiciary Committee would be responsible for drafting any articles of impeachment against Trump.

In a letter to three House committees, House Intelligence Committee Chairman Adam Schiff (D-Calif.) detailed the White House’s "unprecedented campaign of obstruction." Schiff likened Trump’s behavior to that of President Richard Nixon during the Watergate scandal and said that the report to the Judiciary Committee would "catalog the instances of non-compliance with lawful subpoenas" so that that panel may determine "whether an article of impeachment based on obstruction of Congress is warranted along with an article or articles based on this underlying conduct or other presidential misconduct."

The fact that Schiff is moving the process forward even as Jackson's court ruling could open up the possibility for more witness testimony signals that Democrats apparently believe they have gathered enough evidence. But despite the salaciousness of the impeachment drama, public opinion on the matter has barely changed. A Politico/Morning Consult poll released Tuesday found the amount of people who support the proceedings hasn't changed, though the opposition has dropped by two points. The country remains divided, with 81% of Democrats favoring impeachment and the same amount of Republicans against it.

Either way, Schiff insists Democrats "will not allow the president or others to drag this out for months on end in the courts." Maintaining the integrity of future elections is essential ahead of a major election year, according to the chairman.

"The president has accepted or enlisted foreign nations to interfere in our upcoming elections, including the next one,” Schiff continued. “This is an urgent matter that cannot wait if we are to protect the nation's security and the integrity of our elections."

More like this
The DOJ hangs Rep. Mo Brooks out to dry for allegedly inciting the January 6 insurrection
By Rafi Schwartz
Sarah Sanders is here for the vaccine — as long as she can credit Trump for it
By Vanessa Taylor
Nancy Pelosi took a stand on the Jan. 6 committee, and it left Republicans whiny as hell
By Rafi Schwartz
Stay up to date