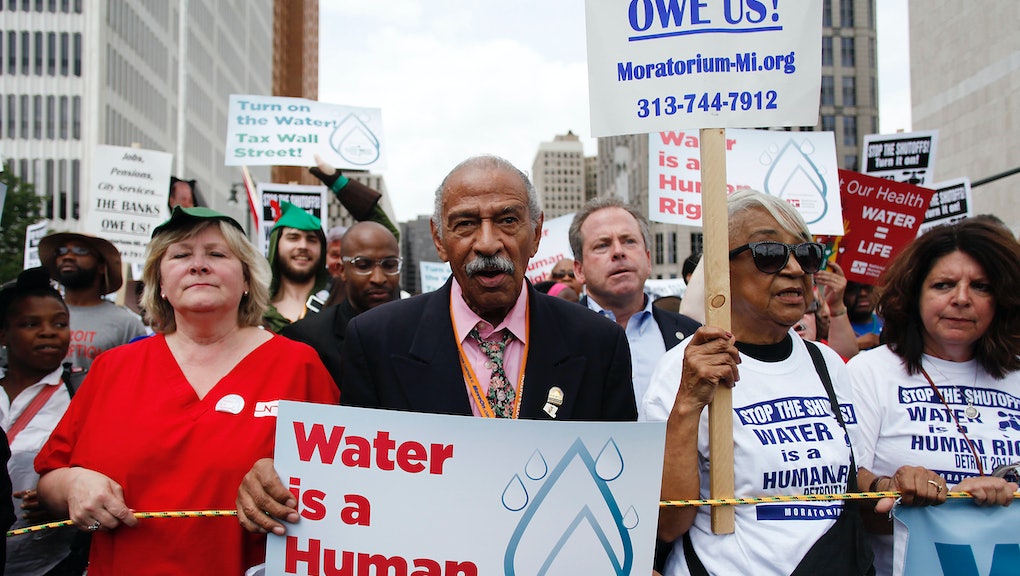 Detroit's moratorium on water shutoffs is a win for activists

How do you wash your hands without any water? To address that problem and help curb the spread of coronavirus, the city of Detroit has come up with a plan to turn the water back on for poor residents. Those with unpaid bills can call the city to have their water access restored; the city will cover the costs for the rest of March, but residents will have to pay $25 per month after that to keep water service. Crucially, residents will not have to pay past-due fees in order to take advantage of the service restoration plan. Detroit Mayor Mike Duggan (D) made the announcement Monday after facing extensive pressure from grassroots and human rights organizations.

The Centers for Disease Control (CDC) recommends frequent hand-washing as the best way to prevent against the spread of all diseases, and especially COVID-19, the new strain of coronavirus that more than 700 Americans have tested positive for. There are no confirmed cases in the state of Michigan, though 11 tests in the state are still awaiting results.

Of course, you can’t wash your hands, much less shower, clean dishes, or wash clothing — all actions that can help curb the spread of diseases within communities — if your water is shut off. Between 2014 and 2018, Detroit cut off water access for more than 100,000 residents who could not afford to pay their bills, which activists say has a punishing effect on those already struggling to make ends meet. This often includes families with very young or elderly individuals, who are even more vulnerable to disease outbreaks.

Grassroots organizers and activists are celebrating the city's offer to restore water as a win for human rights and water rights, as the work to restore water for poor people in Michigan has been underway for years. We the People Detroit, a community coalition dedicated to organizing around civil, water, and land rights, wrote on Twitter: “Today's moratorium is a hard fought battle, won on behalf of families, children, and elders living without water.”

“Thank you [Detroit Water and Sewerage Department] for doing the right thing. Water is a basic need,” tweeted the People’s Water Board, a group that advocates for access to clean water. The People’s Water Board did however also draw attention to the fact that after a decade of work for water accessibility, these needs are just now being met. As recently as Sunday, activists said that the Detroit city officials were still dragging their feet on restoring water.

In November 2019, the American Civil Liberties Union (ACLU) of Michigan wrote a letter to Michigan Gov. Gretchen Whitmer (D) encouraging her to take executive action to restore water to residents. The letter read, “Mass water shutoffs in Detroit have created a silent crisis that has already claimed the health and lives of far too many innocent people over the course of nearly two decades.”

While the moratorium on water shutoffs is a definitive win, the longer term impact of the $25-a-month charge for poor families will add up. In the city's announcement, it is not specified how many months the price point will remain at $25; the offer is said to be valid until the threat of COVID-19 "passes." If the $25 monthly kicks in starting in April and lasts through the end of 2020, that's still a $225 fee to access water that might be difficult for a family living in poverty to afford. Experts say the U.S. has likely already missed the window for "containment" of coronavirus and should now focus mainly on "mitigation" — meaning the outbreak could last months yet.

Detroit's water restoration initiative, while a win in some respects, thus calls into question the efficacy of shutting off access to a needed resource as a way to punish someone for their inability to pay for it. It also highlights what many feel to be a consequential difference in the language we use around things like water and housing; after all, the United Nations declares access to safe and clean water a human right, not merely a good to be purchased.