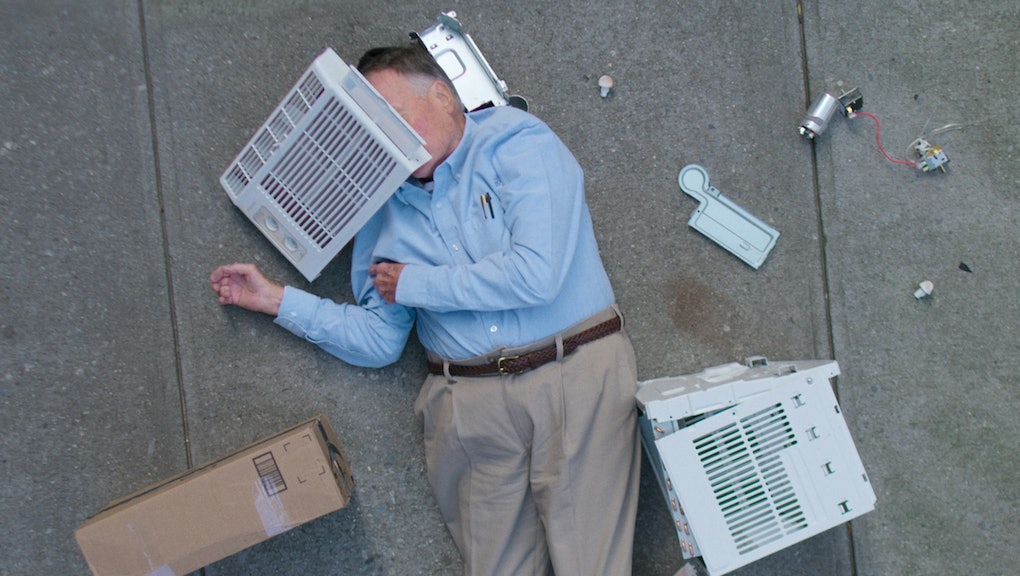 'Dick Johnson Is Dead' is a sweet, twisted documentary about dying

There’s something inherently elegiac about home movies. You might trace it to their fading cultural real estate, crowded out by fleeting short form video, or the fact that you can always film and instantly edit whatever you want now. But watching them back always makes youth feel so distant, or, at worst, evokes the dread of failing to properly capture so many other formative memories. This isn’t the primary concern of Dick Johnson Is Dead — that’s more or less right there in the title — but it’s powered by an overwhelming desire to immortalize someone on film before it’s too late.

In her deeply affecting new documentary, director Kirsten Johnson somehow builds a monument to her father, clinical psychiatrist Dick Johnson who suffers from dementia, by staging his death on screen. And then she kills him again, and again, and again, in increasingly absurd and bloody fashion. He visits the afterlife. He peers into a fake memorial service. Dick’s a charming, generously willing participant in the efforts, except on the rare day when it overwhelms him. In an attempt to preserve her father’s spirit before he succumbs to illness, Johnson’s made a strange, spellbinding home movie for the ages.

It’s rife with pitch-black humor, watching a window AC unit plummet onto his head, a delivery guy whack him in the neck with a package, or Dick tumble down the stairs with a puddle of blood collecting beneath his body, as Johnson coaches him to shift his leg to a more convincing angle. Blurring the documentary form in that sweet-spot between nonfiction, artifice, and delirious re-enactment, she never lets it settle into convention. Besides the slice-of-life segments and staged deaths, Johnson imagines glossy, highly surreal trips to the afterlife for Dick, surrounded by loved ones, Jesus, and a respite from his deformed feet.

After raising a family of devout Seventh Day Adventists, whose intake of movies and television was severely limited, you sense that Dick’s fully surrendered to the idiosyncratic. In the film’s earliest minutes, Johnson refers to her father as an “open, accepting” presence — which may not do justice to someone who’s down to die on camera numerous times, and graciously accept Johnson’s unconventional co-parenting setup. They have a way of making these choices not only seem exceedingly natural but like the most humane approach to living.

Nearly a half hour into the film, you grasp why this was such a crucial exercise for Johnson. She and her father are still visibly shaken from the loss of her mother more than a decade ago, and that there’s such little video footage of her life. Despite Johnson’s storied, nearly three decade career as a cinematographer, she says that almost all footage of her mother comes after she was afflicted with Alzheimer’s. Johnson has referred to footage of her mother’s rapidly deteriorating health in 2016’s Cameraperson as a “profound act of betrayal,” so this provides an opportunity to reverse course.

She includes more of this discomforting footage in her latest film, like the day when her father is on the brink of declining past the point of participation. They’re staging another fake death, where the crew makes certain to remind him again and again that the pouch of fake blood is exactly that — but it still overwhelms Dick. In the moment, he calls this a worse day than his heart attack after eating too much chocolate cake, a defining early health scare which gets several callbacks throughout the film, and Johnson hurriedly wraps up the shoot as the cameras still roll.

Other filmmakers might have edited out the tumult, but Johnson willingly confronts viewers with the same ethical dilemmas faced by directors. In the film’s early minutes, she narrates that she’s filmed “the beginning of his disappearance, and we’re not accepting it.” Through countless fakeouts and about-faces, Johnson lands on something more enduring than acceptance, but the notion that preservation and cheekily confronting mortality can soften the blow of its ugliest days. In building a wall of artifice around the incredibly sweet, sincere affection of this relationship, right up to the final twist, the Johnsons have crafted a dreamlike, immensely profound film that will outlive the both of them.