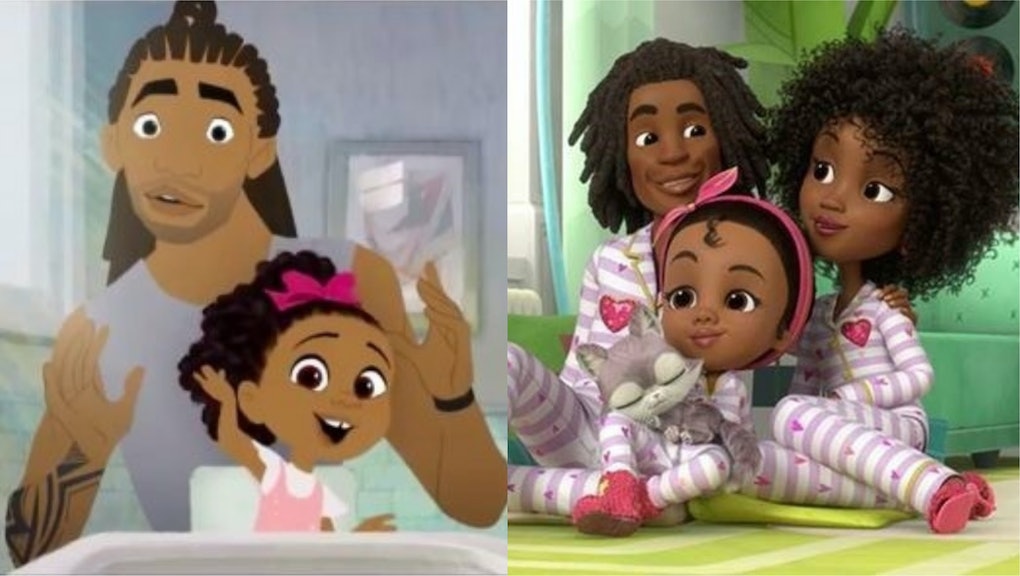 On Wednesday, a number of Twitter users noticed some eerie similarities between an upcoming Nick Jr. series, Made by Maddie, and the Academy Award-winning short film Hair Love. The new show focuses on a preschooler named Maddie, who becomes a fashion design prodigy with the help of her designer mother and musician father. That’s a slightly different premise from the heartrending short, which follows seven-year-old Zuri struggling to style her own hair with a video tutorial from her mother. Her father steps in to help before we learn Zuri’s mother is in the hospital receiving cancer treatment. Good lord!

However, the visual overlap was too striking to ignore. As a few viral tweets pointed out, both fathers sport dreadlocks, the daughters have curly hair, the mothers with natural hair, and perhaps most suspiciously, even the same gray cat. It’s pretty undeniable when you lay them side by side like that.

Hair Love writer and co-director Matthew A. Cherry joined in the confusion on Twitter, quote-tweeting one of the posts and liking a few tweets sharing his dismay. His representative simply told Entertainment Weekly that he “had no knowledge of this show” and offered no further comment.

Aside from the uncanny visual similarities, some users took issue with the fact that Made by Maddie was created by a white woman, Paula Rosenthal of Silvergate Media. The studio provided a statement to The Wrap, denying that it copies Hair Love and indicating that the series was first conceived five years ago — before the short was released or funded on Kickstarter:

“Silvergate Media has been working on the series for the last five years and throughout the production has taken steps to ensure a diverse production team and an appropriate voice cast lending their expertise and talent,” the statement continued. “As creators ourselves, we have the utmost respect and admiration for Matthew A. Cherry and ‘Hair Love,’ and our hope is that when people watch our show, they will see it is its own story with its own adventures.”

The Wrap also notes that Silvergate Media attached concept images for Made in Maddie, dated between 2017 and 2018, which precedes the release of Hair Love. So, while it’s perhaps just an inconvenient coincidence, you have to wonder why they wouldn’t alter some of the visual details after seeing Hair Love release to such acclaim and visibility last year — especially when every show’s being delayed anyway. At the very least, this should only drum up more excitement for Cherry’s crack at an original series — Young Love for HBO Max — debuts down the road.

More like this
'The Nevers' will be so much better when Joss Whedon has nothing to do with it
By Kara Weisenstein
'Exterminate All the Brutes' is a messy, ambitious documentary that ties together genocide, white supremacy, colonialism ... and Josh Hartnett?
By Nicholas Russell
Lena Waithe on empowering marginalized creators and being unafraid to "ruffle feathers"
By Kyla Marshell
Stay up to date